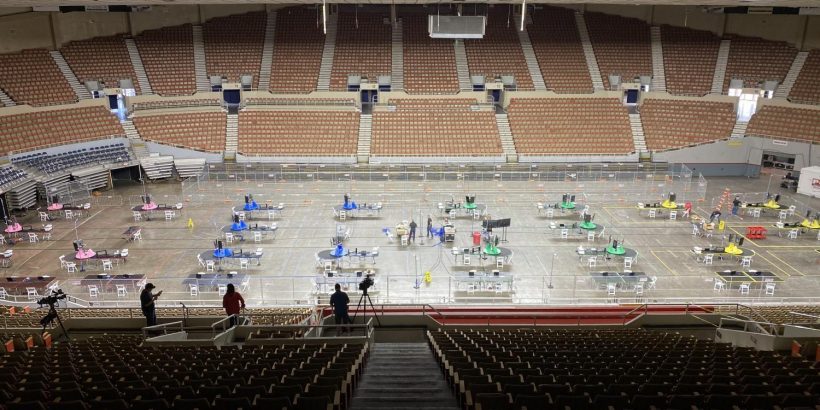 An audit of votes cast in Arizona’s largest election during the 2020 election is proceeding after the Arizona Democratic Party on Friday refused to pay a $1 million bond.

“The Arizona Democratic Party will not risk our supporters’ hard-earned dollars to pay off the Cyber Ninjas for a procedure they are billing Arizona taxpayers to the tune of $150,000,” the party said in a statement.

Cyber Ninjas is one of four firms hired by the state Senate to conduct the audit.

Maricopa County Superior Court Judge Chris Coury said during a hearing earlier in the day that he would temporarily pause the audit until at least Monday so he could hear more about concerns Democrats laid out in a lawsuit.

“There is an obligation to comply with Arizona law to ensure that voter information is protected and remains confidential and it does not go anywhere,” Coury said.

But he stipulated that the audit would only be paused if Arizona Democrats put up $1 million, which it refused.

The party said it was looking forward to reviewing information that the court ordered Cyber Ninjas to produce. The company has not responded to requests for comment.

The Arizona Republican Party said in a statement, “Democrat’s bluff called and they fail to post a $1million bond to stop forensic audit.”

A court document states that Coury “ordered a suspension of the audit until Monday upon posting of a bond, but, upon representation of the Plaintiffs that the bond will not be posted, the matter is moot.”

Another hearing on the issue is still scheduled for April 26.

Coury wants a briefing then on the legislative immunity issue, the separation of powers, and whether plaintiffs have adequate standing.

The legal battle over the audit has played out for months. Maricopa County’s Board of Supervisors previously asked a judge to block subpoenas from the state Senate, but the judge ruled the county had to comply with the subpoenas.

Steve Gallardo, the sole Democrat on the five-member board, joined the new lawsuit, which was filed Thursday and claimed proper procedures were not being followed at the Veterans Memorial Coliseum in Phoenix, where the audit is being held.

Over 2 million ballots and nearly 400 tabulators were delivered to the coliseum earlier this week as contractors prepared to conduct the review.

Arizona Republicans have said the audit will help bolster public confidence in the election results.

Roopali Desai told the judge that there have been security problems at the coliseum and that audit workers were violating state law by using blue pens instead of red ones.

Kory Langhofer, an attorney for the defendants, argued that plaintiffs did not provide evidence for their claims and also said that members of the legislature are immune from civil process while the legislature is in session.

Coury said his goal is to make sure voter information is properly handled.

“I do not want to micromanage and it is not the posture of this court to micromanage—or even to manage—the process by which another branch of government, the Legislature, the Arizona state Senate, proceeds,” Coury said. “However, it is the province of the court to ensure voter information and those constitutional protections are held sacrosanct and that also includes the protection of ballots under Arizona law.”

Also on Friday, Arizona Secretary of State Katie Hobbs, a Democrat, urged Arizona’s attorney general to investigate potential violations of the state’s election laws in connection with the election audit.

Hobbs told Attorney General Mark Brnovich, a Republican, that there have been reports indicating the Senate failed to secure the equipment and ballots its contractors are auditing, resulting in “unauthorized and unmonitored access to both.”

Brnovich told Hobbs in a response that the Senate “has broad constitutional and statutory authority to issue a legislative subpoena and consequently conduct the audit of the Maricopa County election,” adding that Hobbs alleged the Senate may have violated election laws but provided no evidence besides referring to “recent reports.”

“This does not meet the standard of a credible allegation—it is speculation insufficient to support the request for an official investigation. Moreover, the separation of powers in our political system demands deference to co-equal branches of government to conduct their lawful business,” he wrote. “It would therefore be inappropriate to interrupt the auditing process simply because someone asserts that it could be handled in some other manner. Any such requests should be directed to Senate President [Karen] Fann.”