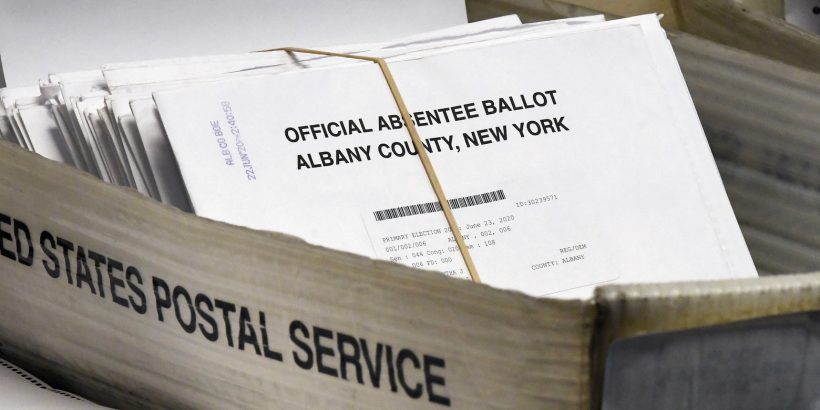 Dozens of state-level advocacy groups are banding together to oppose congressional Democrats’ H.R. 1 — the “For the People Act of 2021” — that would federalize virtually every aspect of who votes in America and how.

State legislatures have governed voting and elections since the Constitution was adopted in 1789, but if H.R. 1 becomes law the federal government will have the final word on virtually every important aspect.

Among much else, H.R.1 would, according to a newly formed coalition of more than 130 state and federal-level, non-profit advocacy groups, seriously damage Americans’ free speech and privacy rights.

The measure “would dramatically alter the First Amendment protections that Americans have enjoyed since the founding of our country. It would institute sweeping new burdens on their constitutionally protected rights to freely speak, publish, and organize into groups to advocate for the causes they support,” the coalition said in a letter made public Feb. 2.

“In particular, H.R. 1 would impose onerous and unworkable regulatory standards on the ability of individual Americans and groups of Americans to discuss the policy issues of the day with elected officials and the public. This bill would also violate the privacy of advocacy groups and their supporters and stringently and excessively regulate political speech on the Internet,” the coalition said.

The coalition is especially worried about a provision requiring public disclosure of non-profit donors, thus “subjecting citizens who contribute to nonprofit organizations to harassment and intimidation by making their personal information available in a searchable government database.

“This mandate focuses public attention on the individuals and donors who support causes instead of on the messages communicated by those organizations, exacerbating the politics of division and personal destruction and further coarsening political discourse. This would have a considerable chilling effect on civic engagement and free speech.”

The coalition is also opposed to provisions of H.R.1 that expands the definition of “electioneering communications” from campaign ads to include digital advocacy advertising.

Later this week, the Texas Public Policy Foundation (TPPF) will release an analysis of H.R.1’s nationalization of mail-in voting and its impact on current state laws and regulations intended to ensure election integrity.

The analysis, an advance copy of which was made available to The Epoch Times, includes a case-study of California’s extremely lax voter verification requirements, including the fact a new voter is only asked once to provide identification that verifies they are who they claim to be.

“In the 2020 general election, 87 percent of the votes in California were cast by mail. How a newly registered voter would ever show their ID when voting by mail the first time appears problematic.

“Further, even if they did show up to vote in person, California’s proof of residency includes several forms of ‘identification’ that do not confirm eligibility to vote in that they don’t prove citizenship.”

The study noted that “California, with the nation’s greatest number of registered voters, more than 22 million, operates on an honor system. The author saw this personally when walking his own precinct during one of his reelection campaigns for the State Assembly.

“He knocked on the door of a registered voter’s home and asked for the voter. The person who answered the door indicated that he was the person. The author asked for his vote and he was met with a confused look. ‘I am not a citizen,’ the person responded. They were a citizen of the People’s Republic of China. Yet somehow this individual was signed up to vote.

“H.R. 1 would impose California’s lax voter identification standards on the entire nation by allowing for a sworn statement of a voter’s eligibility in place of verified identification.”

The TPPF analysis further observes that, “while H.R.1 would make it difficult to prevent noncitizens from registering to vote and even voting, another portion of the bill would also make it more difficult to remove deceased voters and those who moved out of state from the voter lists.”

Chuck Devore, the study’s author and TPPF’s Vice President for National Initiatives, told The Epoch Times, “this does an end-around the 36 states that require or request a form of identification to cast a ballot—a method of voter verification that is being strengthened by the implementation of existing federal law, the REAL ID Act, which upgraded state-issued driver’s licenses and ID cards to include proof of citizenship.

“H.R. 1 also curtails election officials’ ability to maintain accurate voter lists. This, combined with the bill’s push for more mail-in balloting, is a recipe for paid vote harvesters to collect millions of votes from ineligible voters, the dead, the moved away, and noncitizens alike.”

Mastriano contended the Democratic proposal “dumbs down elections as well. We have diverse laws from state to state and many of them have ID requirements, so you know who is showing up to vote and they have rules on what is required for registrations.

“If we think it was so bad in this past election with six states with contested outcomes, imagine 50 states with that kind of mix-up and ambiguous federal laws.”

In addition, “it would sabotage state voter ID laws across the board, and it would undermine election integrity by mandating same-day registration. I mean, this is incredible because it would also potentially mandate registration of ineligible voters,” he said.