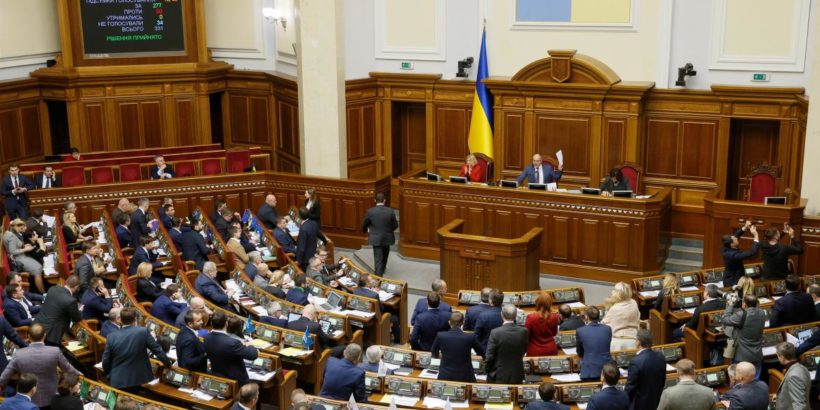 KYIV. Nov 20 (Interfax-Ukraine) – Ukrainian members of parliament have demanded the presidents of Ukraine and the United States, Volodymyr Zelensky and Donald Trump, investigate suspicions of the legalization of $7.4 billion by the “family” of ex-President Viktor Yanukovych through the American investment fund Franklin Templeton Investments, which they said has ties to the U.S. Democratic Party.

At a press conference at the Interfax-Ukraine agency on Wednesday, MP Andriy Derkach announced that deputies have received new materials from investigative journalists about international corruption and the participation of Ukrainian officials in it.

“Last week, November 14, the Prosecutor General’s Office (PGO), unnoticed by the media, announced a new suspicion to the notorious owner of Burisma, ex-Ecology Minister Zlochevsky. According to the suspicion, the Yanukovych family is suspected, in particular, with legalizing (laundering) of criminally obtained income through Franklin Templeton Investments, an investment fund carrying out purchases of external government loan bonds totaling $7.4 billion,” Derkach said.

With reference to the investigation, he emphasized: it was money criminally obtained by the “family” of Yanukovych and invested in the purchase of Ukrainian debt in 2013-2014.

For his part, MP Oleksandr Dubinsky from the Servant of the People faction said that according to investigators, “the Yanukovych ‘family’ illegally obtained $7.4 billion and laundered the funds through an investment fund close to some representatives of the U.S. Democratic Party in the form of external government loan bonds.”

“The son of Templeton’s founder, John Templeton Jr., was one of President Obama’s major campaign donors. Another fund-related character is Thomas Donilon. Managing Director of BlackRock Investment Institute, shareholder Franklin Templeton Investments, which has the largest share in the fund. It is noteworthy that he previously was Obama’s national security advisor,” Derkach said.

The MP said that the presidents of Ukraine and the United States should combine the efforts of the two countries to establish facts of corruption and money laundering with the participation of citizens of both countries.

“President Zelensky must pick up the phone, dial Trump, ask for help and cooperation in the fight against corruption and fly to Washington. The issue of combating international corruption in Ukraine with the participation of citizens, businessmen and U.S. officials should become a key during the meeting of the two presidents,” he said.

Derkach said as a result of the meeting, it is necessary to build interaction between the Ukrainian investigating authorities and the U.S. Department of Justice to obtain information about the organizers of the bond issue, clients and beneficiaries of investment funds for each purchase, interrogate fund officials, etc.

As reported, on October 9, 2019, Derkach published official correspondence between NABU and the U.S. Embassy, according to which the first deputy of the National Anti-Corruption Bureau of Ukraine (NABU), Gizo Uglava, through his assistant Polina Chyzh, for a long time provided the U.S. Embassy with information that negatively affected the course of events in Ukraine and the United States.

Derkach said Chyzh received instructions from the representative of the U.S. Embassy in Ukraine Hanna Emelyanova to provide information on the case involving Zlochevsky.

Derkach also announced the amount of money transferred to representatives of the Burisma Group, including Hunter Biden. According to documents, in general, in favor of Hunter Biden, Alexander Kwasniewski, Alan Apter and Devon Archer, Burisma paid about $16.5 million.

According to Derkach, ex-Prosecutor General Viktor Shokin repeatedly appealed to the NABU Director Artem Sytnyk in the framework of criminal proceedings for Burisma, but constantly received formal responses. The activities of Shokin, according to the MP, irritated then U.S. Vice President Joe Biden during his fifth visit to Kyiv in two years. The visit on December 7-8, 2015, was devoted to solving the issue of Shokin’s resignation for the affairs of Zlochevsky and Burisma, he said.

“The subject of pressure was the $1 billion credit guarantee that the United States should have provided to Ukraine: Biden himself acknowledged the pressure in his speech to the U.S. Foreign Relations Council in January 2018,” Derkach said.