New Patriot Tools For You To Connect With 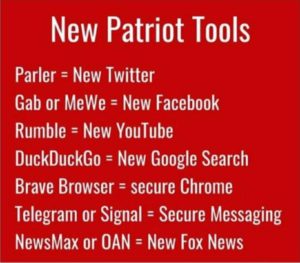 2004 was the year! This new phenomenon of being able to connect with grade school classmates and long lost relatives through the internet was mind-blowing!

Joining groups, sharing ideas, photos, vacations and even photos of meals seemed to be of interest to someone, somewhere down our friend’s list. Facebook rose to the top squelching the newly formed MySpace, becoming the #1 online form of communication in the world.

In recent years, it became apparent Facebook began reading our posts, either by AI technology or by human interception. They began curtailing the interests of each post if the content did not align with what mainstream media reported on. In otherwords, free speech seemingly was not allowed.

Facebook began as a platform which in simple terms, allowed them to set common courtesy guidelines upon admittance where free speech was welcomed.

If Facebook began as a publisher, they would have the right to censor, but they did not begin this way. However, they are now operating as a publisher. They have gone so far as to remove thousands of people and groups for content they don’t agree with. Are you one of them?

All at once, on the same morning, every single C-VINE administrator was banned from their personal Facebook account. Some administrators had never posted anything political nor offensive on their facebook pages, yet they were struck down, too. Since when are people banned from Facebook because of who they work with? Is this the American way?

Apparently, yes, for this is what happened to me!

Over the past few years when Facebook was cracking down on free speech, the question was often asked, “Why can’t someone create another type of social media platform?”

Well, now someone has… and there are several.

We allowed Facebook to become our main channel of communication even overriding texting. Facebook seemed to be more secure, not needing to give out our email or our phone numbers to communicate. But now that they have severed our most used form of communication with you, how do we all reconnect?

There is always a silver lining behind every dark cloud.

C-VINE Administrators have found MeWe and Parler, and are in the midst of seeking out other free-speech platforms. We are committed to continual research and will readily share accurate and relevant news with you.

Will you help us spread the word?