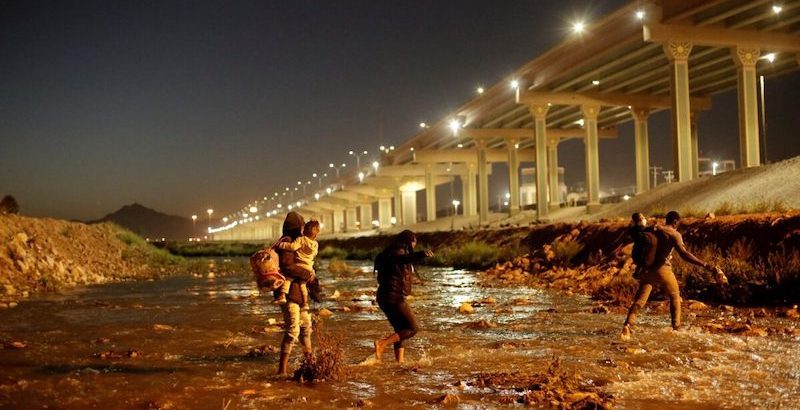 Kids in cages was the line the media used to condemn President Trump, yet the current border crisis is much larger today.

The glaring question the media seems to be ignoring is, “Why are thousands of unaccompanied children crossing our border?”  Why would thousands of parents let their minor children migrate to America, without them?

Perhaps in dire straights, there may be a few unaccompanied kids… but thousands upon thousands?

Americans who are awake understand that crimes against humanity are real. Were these children trafficked? Were they brought here against their will? Do their real parents even know where their children are? ‘Sleeping’ Americans don’t want to think about such things.

Without knowing who their parents are, we may never know the real reason they are here and who actually brought them in.

Many are crossing our border with COVID-19. We have been told to expect another COVID surge in our country. Will this be the contributing factor?

At what point will our country be ‘too full?’ Our detention centers are at maximum capacity. We cannot handle any more immigrants yet the current administration continues to welcome them.

With the agreement in place between the Trump and Mexican Administrations of detaining illegals, we had very little border crisis. Obviously, there is a crisis, now. Why else would the current administration be directing FEMA to assist with sheltered migrant children?

If our new administration will not protect our country against mass invasion, who will?

US Opening New Facility to Hold Up to 2,000 Child Migrants

The United States is set to open another facility to deal with the surge in illegal immigrants, President Joe Biden’s administration announced Saturday.

The new facility is in Pecos, Texas.

It can initially hold about 500 children, with the potential to expand to 2,000, according to the Department of Health and Human Services’ Office of Refugee Resettlement (ORR).

ORR is legally required to care for the children until they are united with a sponsor, typically a parent or relative, while their cases are processed.

The Target Lodge Pecos North property will house migrants in solid structures. Additional semi-permanent structures may be added, although the office tries to place children in solid ones.

Children will be sent to the facility when the site is ready to safely receive them, ORR said in a statement. The site will be used as a stop before children are transferred to ORR shelters, “where children receive educational, medical, mental health, and recreational services until they can be unified with families or sponsors without undue delay.”

ORR officials are struggling to handle the influx of unaccompanied minors crossing the southern border since Biden took office in January, and have had to open or reopen a number of detention centers.

“While ORR has worked to build up its licensed bed capacity to almost 13,500 beds, additional capacity is urgently needed to manage both enhanced COVID-19 mitigation strategies and the increasing numbers of [unaccompanied children] referrals from DHS,” the agency said.

Department of Homeland Security (DHS) agents apprehend those who illegally cross the southern border from Mexico.

HSS is utilizing both short- and long-term options to deal with the surge, including expanding capacity, reducing the time it takes to unify a child with a sponsor, and establishing emergency sites to decrease overcrowding in other facilities.

In one example, the agency reached an agreement with officials in Dallas to house male teenagers in a convention center for up to 90 days.

The U.S. government also opened or reopened temporary holding facilities in Midland and Carrizo Springs. Both facilities have dealt with COVID-19 outbreaks, while the former was ordered to stop using water for human consumption because of integrity concerns.

The surge in unaccompanied minors stems from the Biden administration changing protocol from the Trump era. Under Title 42 powers, officials in the previous administration expelled all illegal border crossers. The Biden administration is still expelling some crossers, but are allowing any minors without adults to enter the country. Biden also ordered a halt to the Remain in Mexico program, which made asylum seekers wait in Mexico until their claims could be heard.

Biden administration officials told reporters in a call on Thursday afternoon that Customs and Border Protection had 4,500 children in custody while ORR had over 9,500.

Senators who visited the border last week decried the conditions they witnessed and urged the administration to take action.

“The number of unaccompanied children arriving at our southern border is at a level we have never seen before,’ Sen. Shelly Moore Capito (R-W.Va.) said in a tweet. “My visit to a migrant children’s facility in El Paso yesterday underscores the need to unify our message, secure our border, & fix the humanitarian crisis we are facing.”