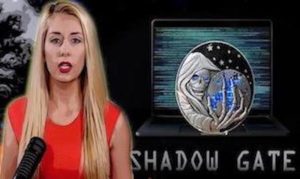 One day prior to the release of an explosively incriminating documentary, Millenial Millie has been Swat-Teamed and arrested on charges of burglary. This is that documentary. See for yourself if MM’s arrest is valid or a possible hijack.

Were government contractors being hired by government officials to frame the Trump Campaign and set him up for the Russia Collusion investigation? Were witnesses provided for the impeachment hearing and were administrative support services provided to the Department of Justice during the Mueller Investigation?

Who the public sees and who the public isn’t allowed to see is strategically fixed. FOYA requests, investigational hearings, etc., are kept clean while the ‘dirty work’ is kept secret by contractors working underground. These international criminal enterprises confiscate personal data and trade it for blackmail.  The nefarious activities lurking in these agencies are about to come to light. It has been named, ‘Shadow Gate.’

SHADOWNET
One whistleblower who worked as a contractor managed enterprise level project, but instead of managing the construction of a large building, he managed the most sinister operations imaginable.  Another whistleblower was a contractor for various privately created agencies, international and federal.

ShadowNet began in 2007 and is the commercial version of an IIA weapon which stands for Interactive Internet Activities. This is code for social media psychological warfare. The target could be an individual through social media or it could be an entire country.

Targets could be a group, city, religion, culture or whatever grouping is necessary to push an ideology or a product. Keying on emotion is what makes this successful. If blackmail is needed to push an idea, based on personal internet searches, it is easy to target. What we post on social media; our fears, anxieties, intolerances, our contacts, past injuries, anything they need to control our thinking, is already locked in the internet. Based on this, it is very simple to predict how a we, their target, will respond.

This group of contractors hijacked the Afghan elections. Needing to tip-toe around the Taliban was easy with IIA. They manipulated their leaders into thinking person ‘A‘ would be a better choice than person ‘B.’  IIA used to be done through intelligence but now is done by algorithms through the internet.

IIA BACKFIRES
This technology was so successful, it was used to interfere with our own elections. Commercial and black market value of this type of technology is enormous!

The whistleblowers from NSA and other restricted agencies collected data, a.k.a. ‘The Global Surveillance Whistleblowers,’ were used to turn criminal spying into legal practice spying on everyone, each minute of the day. Section 702 allows for spying on citizens around the globe to be stored for 72 hours, then erased, unless they want to copy this data. If it is copied, then they have a record for as long as they see fit.

CGI PASSPORT INCIDENT
Working for John Brennan, this whistleblower revealed when we are told of foreign hacks taking place, very often it was actually the government gathering our info. How does this whistleblower know this? She was the one instructed to gather it.  What a terrifying cover-up against the citizens of the world!

Through global networks, IIA was successfully used to get Obama elected, get NSA data breaches and to insert data bridges into private servers. To think that another company is copying all emails, texts, phone calls, text messages, emojis, from Facebook, Instagram, Twitter; anything where we use computer technology for communication. Everything is being uploaded, copied and pushed off-shore. It is illegal, yet it is being done.

SNOWDEN GOES PUBLIC
According to Edward Snowden, the NSA collects all internet traffic of all U.S. citizens from major internet and telecom companies though the FISA 702 program. After this, Clear Force was created. All these private corporations all had access to NSA servers, even having foreigners working for them. John Brennan’s fingerprints are all over this.

To have a company who keeps everyone’s data, giving access to other corporations for its use is wrong. One year later, the CIA was caught spying on the U.S. Senate. Because this was their own network they had authorization but it was only supposed to be for their own use. These official documents suggest our private information is managed and stored in servers in Germany.

With the Senate’s commuter network compromised by John Brennan’s CIA, and our documents being hosted in German servers, the idea of eavesdropping is mind-blowing. All of this is taxpayer funded. All these LLC’s just keep cycling.

TRACK PHONE
When Obama was president, he created a program for low income families by giving each of them a cell phone. Track phone by Safe Link Wireless enabled low income families to qualify for these phones then shortly afterward, free data plans were introduced.  The Ferguson and also Michael Brown riots happened shortly thereafter. Were these riots manufactured then fanned by IIA technology? Someone is South Korea traced the rioting with IIA technology and discovered the source was indeed IIA manufactured and linked to Ukraine.

SOCIAL MEDIA PLATFORMS NEVER BUILT TO BE FREE SPEECH PLATFORMS
Social media platforms, My space, Facebook, Twitter, Instagram, Google were are designed to gather information. As we willing log everything about ourselves, and push send, IIA corporations gather this info and store this away.

When John McCain/Palin ran for President, those contractors were hired to work his campaign in order to micro-target citizens. Mika Brzynski’s father was the head of influence ops. for psychological warfare. The media gets their talking points from the  analysts but then they disseminate them though their assets using an application like the shadow net.

UKRAINE
Trump’s focus in Ukraine isn’t just about Biden, it’s about many others who have implicated themselves. With everything in place, the military industrial complex had confidence they could take Trump out as a candidate or as President.

IIA has been used against Trump through the Russian Dossier, lastly touched by John McCain and Lindsay Graham. As part of the dissemination process, it was handed off to BuzzFeed. The dossier was built with fake information and used as a weapon as part of an influence op. Its purpose was to create chaos and influence an election. Those people involved here were also part of the ShadowNet.

There is documented proof military grade psychological warfare weapons were used against by those closest to him. As Trump’s election unfolded, as Russia collusion began, it was to keep from exposing nefarious activities in Ukraine. Nellie Ohr testified the Russian Dossier came from Ukraine. Money laundering, other IIA’s, all point to Ukraine.  Ukraine was the epicenter for everything!

During the Obama/Trump transition, Storch was not confirmed by the Trump Administration but Storch is somehow confirmed, anyway. Eric Ciaramella was a decoy to hide the fact the president was being wiretapped through a 702 data collection problem. In the data world, nothing ever dies.

BLACKMAIL ON POLITICIANS
Blackmail on politicians is non-partisan. Both sides get played but no one really knows what they have on them. Even Pelosi doesn’t know fully what they have on her. Surveillance mixed with blackmail equals obedience.

These people behind IIA, have been operational for over a decade, well before Trump. They did their best to get Hillary in. The polls were a result of the IIA, not the vote of the people. Some of these votes being counted were because of the fake news stories paid for by Russia, on their FB pages. Not only did they hack the DNC but they hacked the RNC, too.

General Jones was offered by Obama, the position of Secretary of State.  He accepted. A couple of days later, Obama tapped Hillary Clinton to be Secretary of State. He then offered Jones the National Security Advisor position but almost turned it down because he was so offended at how Obama snubbed him.

SETH RICH
Seth Rich was hired by the DNC and was asked to image the DNC server to keep it safe. He uploaded it where he was told. A lot of their people saw it and copied it.. treasure trove!

At the same time, the RNC was hacked. The hack was done on purpose so information could be deleted or inserted. Some of those emails from HRC disappeared. Her emails were still being examined but the evidence had to be removed. The only way the DNC server could be accessed was if there was a breach. This was why the FBI never asked for the server.

Seth Rich thought what he was doing was correct, later on it would cost him his life.

FAKE NEWS
The riots, the cities burning, assault on our police departments, are all IIA derived. More stuff in the news is fake and fabricated than what is actually real. Many jurors are IIA selected. Many judges are corrupt. When IIA is needed to sway opinion, since many people do not understand anything about it, selecting the right judges and jurors makes it easy to support a narrative.

AGENDA
With IIA technology, an American may seek employment but due to IIA technology, criminal background checks create behavioral profiles that determine whether or not they are inclined to steal or leak. This technology is sold to H.R. They may deem you unemployable because of the algorithm they created.

Several features of the Interpol program indicate that they’re using a reiteration ShadowNet and Clear Force technology. Integration with Artificial Intelligence, robots, and the replacement of traditional law enforcement is at hand. Elements of the Green New Deal are pushed by leftist enthusiasm. This political movement is deeply connected to the U.N. who is partnered with Interpol to corral us into the artificial intelligence and robotics for law enforcement direction.