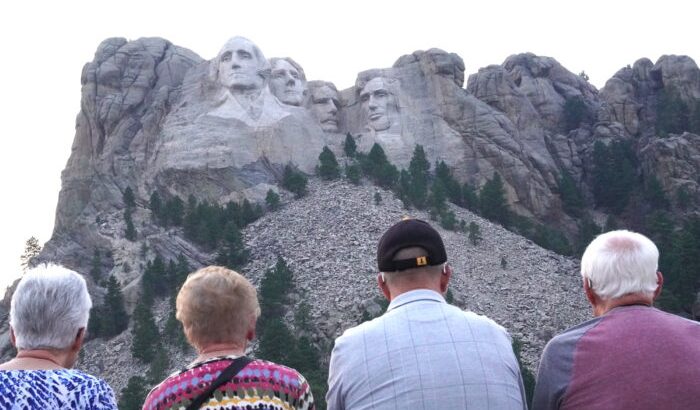 KEYSTONE, South Dakota—A soft wind blew across the Grand View Terrace of Mount Rushmore National Memorial, and a shiver ran up my spine.

For millions of Americans visiting for the first time, like me, this is hallowed ground—liberty and sacrifice carved into the timeless mountain.

“It gives you a tingle,” said Doug Alford of Texas, waxing proudly on the observation deck 150 feet below the monument.

“I’m inspired by what people used to do. This [monument] is as impressive as skyscrapers they built in the 20s.”

As we continued gazing at the tall sculpture, marveling at the extraordinary talent and engineering that went into building it, Alford lamented that the country he once knew is no longer the same.

Today, the people seem ready to go to war over culture and politics. We see the great American spirit fading into the ether of History across a national divide that grows wider by the day.

On the eve of the 21st anniversary of the Islamist terror attacks of Sept. 11, an estimated 2,500 people would visit Mount Rushmore to see America’s four greatest presidents—George Washington, Thomas Jefferson, Theodore Roosevelt, and Abraham Lincoln—memorialized in granite.

The larger-than-life figures soar above the green spires of ponderosa pine and arid, rocky landscape, where hawks and eagles fly.

Sculptor Gutzon Borglum, Mount Rushmore’s creator, had envisioned a lasting monument that would speak to the ages.

He proclaimed: “Let us place there, carved high, as close to heaven as we can, the words of our leaders, their faces, to show posterity what manner of men they were. Then breathe a prayer that these records will endure until the wind and the rain alone shall wear them away.”

Borglum selected the four presidents to enshrine Mount Rushmore for their pivotal roles in American History.

Thomas Jefferson, the third president, was the principal author of the Declaration of Independence that exemplified Enlightenment ideals of human suffrage.

Theodore Roosevelt, the 26th president, pushed for constructing the Panama Canal that joined the Atlantic and Pacific oceans. He fought the big monopolies and set aside millions of acres of conservation land through the national park system.

Abraham Lincoln, the 16th president, led the nation through the Civil War, the bloodiest period in U.S. history, and preserved the union.

Patriotism for Hope and Freedom

Every year, nearly 3 million people visit Mount Rushmore—about 2,000 every day—out of curiosity or patriotism. Many see the monument as an anchor of hope and freedom in a world lapsing into tyranny.

The Alfords said they drove from Texas to the Black Hills of South Dakota to see Mount Rushmore and feel its inspiration.

It was a trip long in the making.

“It’s amazing what you could do back then when you got behind something,” Doug Alford told The Epoch Times, citing Borglum’s artistic vision. “This is when people cared about the country.

“I remember how much pride the country used to have. Now, there’s no national pride—all destroyed.”

During the summer riots of 2020, following the death of George Floyd, adherents of the new cancel culture ran around defacing and pulling down statues of American figures they considered “racist.”

Cancel culture soon began focusing on statues of America’s Founding Fathers, claiming that they, too, were symbols of slavery and brought them down.

Amidst the social turmoil, Mount Rushmore would also become a target of calls for removal. Due to environmental concerns, annual fireworks displays haven’t taken place here since 2009.

Jim Denker and his wife Kate said they came from New Jersey to see Mount Rushmore for the first time now that they are both retired.

“It brings back the glory of the United States. It’s very special—spectacular,” Jim Denker said.

“People way back then had respect for that. It’s changing now. Here, you see people, and their eyes light up because of this crazy situation.”

The couple admits they’ve “missed out on a lot of things in America” during their working years. They wanted to pay their respects at Mount Rushmore in 2022 because “the glory of America is what it’s all about,” Jim Denker told The Epoch Times.

Alan and Karen Patrick of Washington said they’ve been visiting the monument regularly since 1999.

Each time, they get goose bumps when they see it.

“It’s very impressive—beautiful,” Alan Patrick said. “I think it’s a great time to see it. I don’t want to see it go down.”

‘Always Wanted to See It’

As a first-time visitor from Kansas, Jeff Dohrman said he couldn’t help but feel patriotic seeing the four presidents cast in granite.

“It makes you think of History and what the United States is going through. I’ve always wanted to see it. This was one of the main things.”

His wife, Denise, said Mount Rushmore was on her “bucket list” of things to see.

“It’s pretty amazing,” she said of Mount Rushmore. “All the ‘wokeism’ that’s going on … I think more people need to understand the country.

“It’s just the love of your country,” she told The Epoch Times. “We have too many old people now running our country. We need new blood—young blood.”

Visiting for the first time, Peter Libby from Maine set up his digital camera and tripod on the Avenue of Flags to get the best possible shot of Mount Rushmore in the fading sunlight.

“They were the true pioneers—and now all four are here,” Libby told The Epoch Times.