His name was George Floyd

This is one 8-minute video from Hell I wish I didn’t have to see. A Minneapolis police officer pressing his knee into this man’s neck – while inches from the back seat of a police car – and then the man died!

Why wasn’t he placed in the back seat of the squad car? The officer even sounds like he’s taunting the man about it. And the dead-cold  look on the face of his partner standing nearby makes my skin crawl.

This same police officer already has 18 previous complaints on record against him, prior to this video. Questions remain as to why he was still on the police force.

Is this even real?  I feel like I just entered a wicked twilight zone.  This can’t be happening in my city, my state!

And the timing of it is in itself suspect. We’re just getting a handle on this hyper-covid-19 situation, only to be knocked to the ground again with rioting, burning our city, and looting.

(There have been reports that police dressed as thugs were seen smashing store windows and looting Target. One brave citizen followed this “cop”, confronting him about what he was doing!  And now the citizenry has identified him.)

Things have obviously gone more than terribly wrong. What we have not seen yet, is what took place prior to this arrest?  What could possibly justify such police torture?

Is there any way justify this needless killing?

Nothing can justify killing him.  Nothing.

Freeman said the evidence against Chauvin includes video from a bystander’s cell phone, body camera footage as well as statements from witnesses and a preliminary report from the medical examiner.

“We felt in our professional judgment that it was time to charge and we have so done it,” Freeman said.

He later added he expected additional charges to be brought against the other officers involved in the incident, but did not go into detail.

Chauvin’s arrest follows three days of protests across Minneapolis that led to looting, violence and a police precinct being torched.

Freeman also defended the speed of the arrest against Chauvin.

“This is by far the fastest we have ever charged a police officer,” he said. “Normally these cases take nine months to a year. We have to charge these cases very carefully because we have a difficult burden of proof.”

According to the criminal complaint against Chauvin, Floyd’s autopsy showed he did not die from strangulation alone but a combination of being restrained along with various underlying medical conditions including heart disease and hypertension.

Chauvin is the first white police officer in the state to be charged in the death of a black citizen.

Two hours earlier, Minnesota Gov. Tim Walz promised swift justice in Floyd’s death, but also pleaded with protestors who have set fire to Minneapolis to stop, so the city could restore justice and order.

“I won’t patronize you as a white man about living those experiences… but I am asking you to help us,” Walz said. “Help us use humane ways to get the streets to a place where we can restore the justice so that those who are expressing rage and anger and demanding justice are heard, not those who throw fire bombs into businesses.”

Minnesota state troopers provide protection as firefighters battle a fire, May 29, after another night of protests, fires and looting over the arrest of George Floyd. (AP Photo/Jim Mone)

Walz added that that the looting and violence was counterproductive to the ultimate goal of seeking justice for Floyd and that underlying issues involved in Floyd’s death could not be addressed until there was calm.

“We can’t have it because we can’t function as a society and I refuse to have it take away from the attention of the state,” he said. 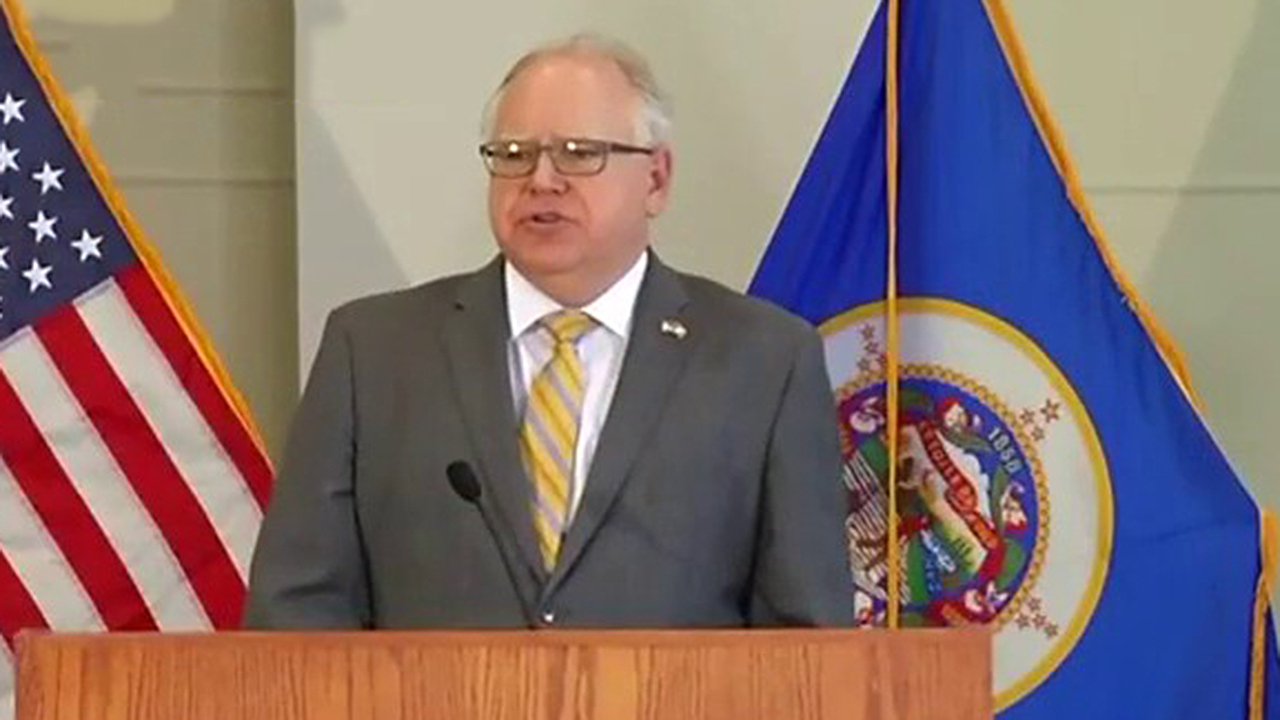 Walz also referenced Philando Castile and other black people who have died in Minnesota at the hands of police.

“Their voices went unheard, and now generations of pain is manifesting itself in front of the world,” Walz said. “And the world is watching.”

About a half hour ahead of Waltz’s press conference, President Trump tweeted, “The National Guard has arrived on the scene. They are in Minneapolis and fully prepared. George Floyd will not have died in vain. Respect his memory!!!”

He had been arrested after an employee at a grocery store called police to accuse Floyd of trying to pass a counterfeit $20 bill.

Floyd, who is black, was then handcuffed by Chauvin, who is white, and pushed to the ground. A cell phone video shows Floyd’s head is turned to the side and he does not appear to be resisting. Chauvin has his knee pressed to the back of Floyd’s neck for several minutes as Floyd is seen gasping for air and begging Chauvin to stop. He does not. Bystanders are also heard shouting at Chauvin to take his knee off Floyd’s neck.

Tou Thao, the second officer seen in the video, does nothing as Floyd struggles for several minutes before going limp.

Together, Chauvin and Thao have had more than a dozen conduct complaints against them in the past, but have not been formally reprimanded.

The two other officers were at the scene were Thomas Lane and Alexander Kueng. 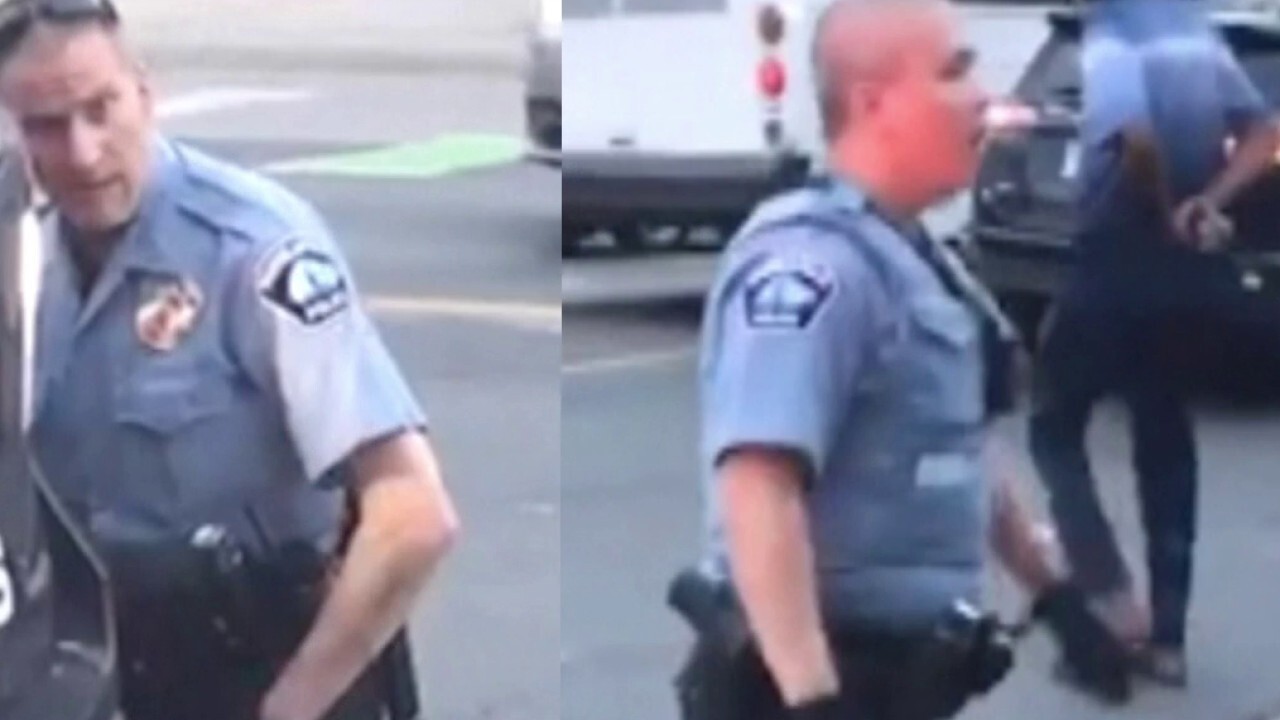 All four have been fired.

The video footage of Floyd’s death ignited simmering racial tensions in the city and has shined a light on the use of force by police officers against black residents.

In an early morning tweet, Trump vowed military support for the governor following another violent night of protests in Minneapolis, which included a police station being set on fire and a crew from CNN being arrested on air.

“I can’t stand back & watch this happen to a great American City, Minneapolis,” Trump tweeted. He took that moment to also criticize the city’s democratic mayor. “A total lack of leadership. Either the very weak Radical Left Mayor, Jacob Frey, get his act together and bring the City under control, or I will send in the National Guard & get the job done right.”

“These THUGS are dishonoring the memory of George Floyd, and I won’t let this happen. Just spoke to Governor Tim Walz and I told him that the Military is with him all the way. Any difficulty and we will assume control but, when the looting starts, the shooting starts. Thank you.”

The president’s tweet, which implied that protestors in Minneapolis could be shot, came with a notice from Twitter that said the president’s tweet violated its rules against glorifying violence. The company also blocked users from liking or replying to the post, though people were still allowed to retweet it if they added a comment of their own.

Separately, the state’s attorney general, Keith Ellison, condemned Trump for his late-night tweets and said they stoked the “angry cycle” of violence in Minneapolis.

“Calling people thugs and calling on people to get shot stems from the same sort of attitude that resulted in the death of George Floyd,” Ellison said on “CBS This Morning.”

Fire burns inside The Family Dollar Store after a night of unrest and protests in the death of George Floyd early Friday, May 29, 2020 in Minneapolis. Floyd died after being restrained by Minneapolis police officers on Memorial Day. (David Joles/Star Tribune via AP)

Late Thursday, a police spokesman confirmed that staff evacuated the Third Precinct station, the focus of many of the protests, “in the interest of the safety of our personnel.” Video showed protesters entering the building where fire alarms blared and sprinklers ran as fires were set.

Minneapolis Mayor Jacob Frey said he ordered police to vacate the Third Precinct before it was overrun by protestors.

“The symbolism of a building cannot outweigh the importance of life, of our officers or to the public.” Frey said early Friday, noting that he had made the call after learning that there “were imminent threats.” 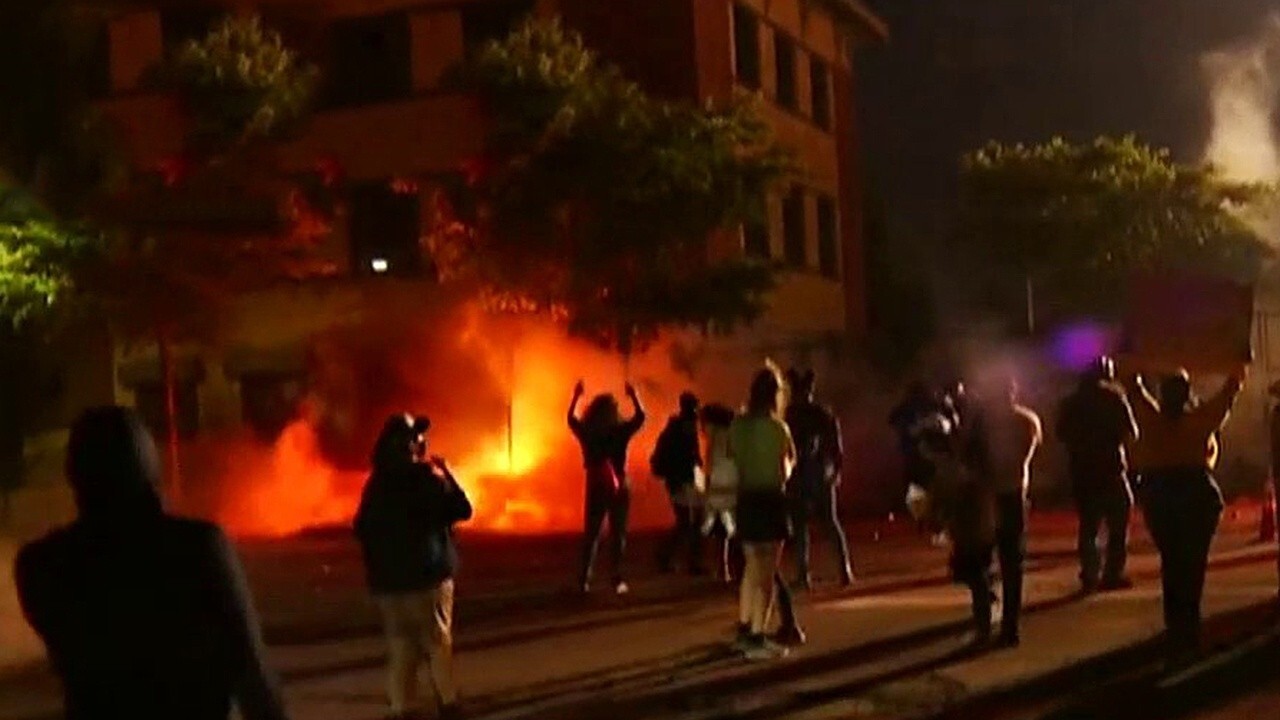 Protestors could also be seen setting fire to a police department jacket and cheering.

Floyd’s girlfriend of three years, Courteney Ross, told the Star Tribune, if Floyd was alive, he would be hearbroken by what was happening in his city.

“Waking up this morning to see Minneapolis on fire would be something that would devastate Floyd,” Ross said. “He loved the city. He came here [from Houston] and stayed here for the people and the opportunities. Floyd was a gentle giant. He was about love and about peace.”

Demonstrations against police brutality also spread across to several cities from Memphis and Los Angeles.

In Louisville, Ky., seven people were shot with one in critical condition after hundreds of demonstrators gathered outside the city’s Metro Hall demanding justice for Breonna Taylor. The protest erupted just hours after Mayor Greg Fisher held a town hall about Taylor’s case and community relations with police.

On March 13, the 26-year-old EMT was asleep in her Kentucky apartment when she was shot eight times by Louisville Metro Police Department officers who said they were executing a “no-knock warrant,” only they did so at the wrong house. The “trap house” they were looking for was more than 10 miles away from Taylor’s apartment.