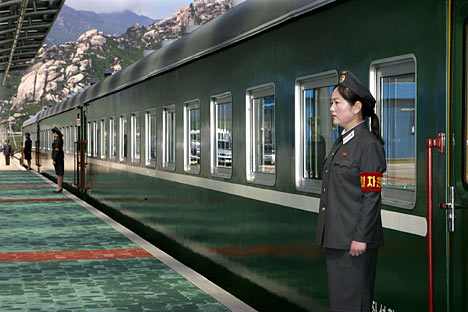 A mysterious and heavily guarded 21-car train that chugged into China’s capital Monday — bringing with it rumors that North Korean despot Kim Jong Un was aboard — departed Tuesday just as suddenly as it arrived, aound for destinations unknown.

Kim was identified as the likely VIP passenger after North Korea watchers noted the green diesel with the yellow stripe down the side looked just like the trains that ferried the despot’s late father to meetings in China and Russia — and on which Kim Jong Il eventually died of a heart attack.

The green and yellow train was spotted at Beijing’s central train station on Monday.  (Kyodo News)

“Our government is trying to thoroughly grasp the related situation, including whether the reports are true,” a South Korean foreign ministry official said, according to Yonhap News Agency. “[But] whether Workers’ Party of Korea Chairman Kim Jong-un is visiting China has not been verified.”

The train entered Beijing’s central train station Monday night with unusually heavy security and after other trains were heavily delayed so as not to interfere with the mystery train’s arrival. On Tuesday, a slew of photos and videos showed a motorcade of black limousines waiting at the train station and Chinese soldiers on the platform, suggesting a high-level official was aboard. By the afternoon, a vehicle convoy led by a motorcycle escort headed to the station. Shortly afterward, the train left.

If Kim was a passenger, it would align with the behavior of his father, who was spotted on a similar train in 2011 heading to Beijing. He made about a dozen trips abroad, almost all to China and all by train because he loathed flying.

Kim Jong Il only traveled by train during his foreign trips to China.  (Copyright 2018 The Associated Press. All rights reserved.)

Kim Jong Il had a penchant for a playboy lifestyle and is said to have decked the train out for lavish parties, during which he engaged in bouts of heavy drinking and sang karaoke. The train – generally 90 carriages that contained bedrooms, conference rooms and a chamber equipped with satellite phones and flat-screen televisions — had cases of Bordeaux and Beaujolais wine flown from Paris, Konstantin Pulikovsky, a Russian official who accompanied Kim Jong ll on a three-week trip to Moscow in 2001, said in an account published in 2002.

”Kim Jong Il can be called a gourmet,” Pulikovsky wrote, adding that live lobster and pork barbecue were included in feasts. ”It was possible to order any dish of Russian, Chinese, Korean, Japanese and French cuisine.”

The train cars are reportedly bulletproof, making them heavier than normal carriages — and much slower when traveling, according to a 2009 report by Chosun Ilbo. The train travels an average speed of 37 miles per hour.

Three separate trains operated at the same time when Kim Jong Il traveled. The first car was used for security checks, Kim rode in the second and the third carried his bodyguards and other personnel, according to the report. The North Korean leader traveled with heightened security after an explosion near the North Korea-China border in 2004 killed 160 people and injured 1,300 others, the South China Morning Post reported.

The trains are bulletproof, causing them to weigh much heavier than normal carriages and move much slower.  (Kyodo News)

The 2004 blast was rumored to be an assassination attempt on the despot.

Kim Jong Il died of a heart attack in December 2011 aboard one of his six beloved trains, the South China Morning Post reported.

On Monday, heavy security was reported at the Friendship Bridge on the Yalu River, marking the border between China and North Korea. There was also news of the train transiting several stations on the way from North Korea to Beijing.

North Koreans entering China usually pass through the bridge, which is used in roughly 80 percent of travel between the two countries. The train would then have likely passed through the Chinese city of Dandong, which is at least a 14-hour journey by rail to Beijing and covers more than 680 miles, according to Reuters.

The train reportedly left by Tuesday, making the trip less than 24 hours.  (Reuters)

Kim Jong Un has not visited a foreign country since he took power in 2011. The North Korean leader is expected to hold separate summits with South Korea in late April and the U.S. in May. Kim’s visit, if confirmed, would also mirror his father’s move, when the elder Kim visited then-President Jiang Zemin in China in 2000 before a summit between the two Koreas that was held later that year, Reuters reported.

Kim was seen in a 2015 video, posted by North Korea state media, aboard a similar train to the one spotted Monday seated at a table in a conference room.

There were also rumors the trains weren’t carrying Kim at all, but instead were for his sister, Kim Yo Jong, who he also sent to South Korea last month for the Pyeongchang Winter Olympic Games. Three sources confirmed to Bloomberg, however, that the despot was the official who visited Beijing. The White House also could not confirm the reports.

Within China, searches for the term “North Korea” were blocked Tuesday, while “Kim Jong Un” turned up results from several days prior on major social media platforms, including Sina’s Weibo. Some nicknames were also blocked, such as “Kim the Third Fatty” (”Jin San Pang” in Chinese). A blocked Weibo post about Kim’s possible visit even showed a combination of three photos of a pig character in a fictional Chinese television series.