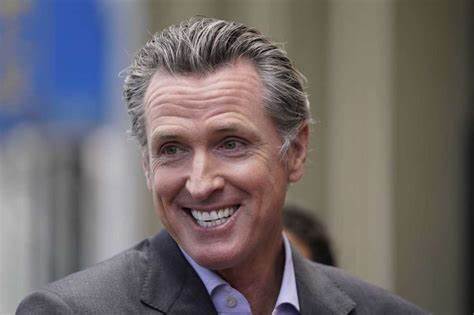 What was mentioned then now is in the open. Newsom is running a TV ad in Florida touting his fantastic leadership in California. He also introduced it with a post on Twitter that includes the ad video, which is summarized with this:

We’re about to celebrate Independence Day — but Freedom is under attack by Republican leaders in states like Florida.

Making it harder to vote.

It’s time to stand up. Don’t let them take your freedom.

In front of a woman in handcuffs, the ad includes a printed quote from the TV station 6 South Florida: “Florida Gov. Ron DeSantis signs bill banning most abortions after 15 weeks.”

Newsom then appears and intones, “I urge all of you living in Florida to join the fight, or join us in California, where we still believe in freedom. Freedom of speech. Freedom to choose. Freedom from hate. And the freedom to love. Don’t let them take your freedom.”

The ad is well done, even though the four points above are the opposite of the reality. For one, women who seek abortions will not be put in jail, only the abortionists. For another, with Florida gaining two congressional seats and electoral votes after the last U.S. Census, while California lost one for each, it’s clear who’s moving where to gain freedom.

But the ad appeals to the progressive, upper-middle class, graduate-school voters who have replaced the working class as the core of the Democratic Party.

The strategy has worked well for Newsom in California. He always brags how he was elected mayor, lieutenant governor, and now governor.

But like other ambitious Democrats, he faces a dilemma. The more progressive the Democratic Party becomes, the more it repels Hispanics and the party’s old core, the working class.

Even the New York Times recognized this in a July 6 profile of new Rep. Maya Flores (R-Tex.), with the biased title, “The Rise of the Far-Right Latina: Representative Mayra Flores is one of three Republican Latinas vying to transform South Texas politics by shunning moderates and often embracing the extreme.”

The story is less biased. “Her campaign slogan — ‘God, family, country’ — was meant to appeal to what she calls the ‘traditional values’ of her majority-Hispanic district in the border city of Brownsville. …

“Two other Latina Republicans, Monica De La Cruz in McAllen and Cassy Garcia in Laredo, are also on the ballot in congressional races along the Mexican border. All three – G.O.P. officials have taken to calling them a ‘triple threat’ – share right-wing views on immigration, the 2020 election and abortion, among other issues. …

“They accuse the Democratic Party of taking Hispanic voters for granted and view themselves, as do their supporters, as the embodiment of the American dream: Ms. Flores often speaks of working alongside her parents as a teenager in the cotton fields of the Texas Panhandle.”

I know many Hispanics like that out here in California. One family I know got its green cards a couple days ago after waiting for many years. They were crying. They love America and went through the legal process to stay here, even though it was grueling. They followed the rules. Now they’re working on becoming citizens.

Another working-class Hispanic fellow I got to know when I lived in Orange voted for Joe Biden in 2020. I mentioned I worked for state Sen. John Moorlach, a Republican, as press secretary. The fellow sympathized when Moorlach lost two elections in November 2020 and March 2021. A couple months ago he told me he couldn’t stand Biden and this November is voting Republican.

Florida, of course, boasts the large Cuban immigration population that came here after Fidel Castro’s communist revolution in 1959 and the subsequent, and continuing, repressions. For a while during the Obama years, it seemed they were moving a little toward the Democratic Party, probably because their young people suffered the same socialist indoctrination as others in the public schools.

Panther Now, a Cuban American site, reported just after the November 2020 election, “While Cubans are slowly leaving the Republican party, it’s usually younger Cuban Americans who don’t carry the same trauma their parents and grandparents do. …

“Trump was so successful with Cubans in Miami because he addressed their fears of socialism and communism. At a Women for Trump rally I went to in September, Trump’s daughter-in-law pushed the idea that a vote for Democrats is a vote for the authoritarian regime many Cubans fear. By ignoring that trauma, Democrats allowed Trump to fill that void.

“Trump knew his audience when he chose to target Cubans with his socialist propaganda. Two-thirds of non-Cuban Hispanic voters are Democrats, while 58 percent of Cubans are Republican.”

I also checked the responses on Twitter to Newsom’s ad. Some praised him. One wrote, “Democrats definitely need to get aggressive and fight fire with fire right now vs Republicans … I totally get what Newsom is doing … he’s showing great leadership stepping up in other states fighting for rights being taken away by the GOP.”

Another also was full of praise, writing, “I’m so proud to be a Californian. Born, Raised and still living in L.A. here in our state we are pro Choice, we don’t try to ban books from schools, we strongly support the LGBTQ Community and we make voting easy for everyone. I love our Blue State.”

But others brought up the criticisms Newsom will face. “California is a 3rd world country, which doesn’t mean that it’s uninhabitable,” wrote one. “It means that it’s a good place if you have money, and crumbling for everyone else. But at least the weather is nice.”

Another itemized the state’s problems:

There’s a reason Gavin Newsom wants you focused on anything but his contributions to California:

As I have pointed out before, when Newsom campaigns in Michigan, Pennsylvania, Wisconsin, and Ohio, he’s going to find a different breed of Democrats. These are the Reagan Republicans and Trump Democrats who were repulsed by the Democrats’ appeasement of the Soviet Union in the 1980s and Hillary Clinton branding them “deplorables” in 2016.

That’s how in the summer of 2016 I predicted Trump’s victory that year. My Democratic relatives and friends back in my home state of Michigan told me they liked Trump and were voting for him. Yet the state hadn’t gone Republican since 1988. And Barack Obama won it with 57 percent and 54 percent. I figured, if Michigan is going for Trump, so are Pennsylvania, Ohio, and Wisconsin. Game over.

For Democrats, California is a sunny life at the beach on a balmy summer’s day. But a race against a Republican come November 2024 in the Rust Belt will occur in a blizzard of snow, sleet, and darkness.