The Story Doesn’t Add Up, Was Floyd’s Death Staged? 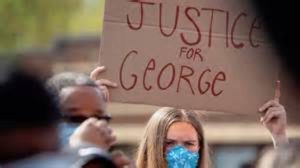 The rioting in Minneapolis Minnesota was almost exactly the same as what we saw right after President Trump was elected. People looting, burning businesses, shattering windows. We also learned many of these hoodlums were bussed in from other cities, promised $15.00 an hour to create mayhem. Who was behind those paychecks? Did we just witness history repeating itself?

The DS wants fear, chaos, panic in hundreds of cities across America to keep the facts from coming out. They are trying to show a division in this country around race. Most people know this is not true. AG Bill Barr made a statement about the death of George Floyd, saying, the video images were disturbing and there is an independent investigation underway.

Diamond and Silk tweeted out the following: “Anybody who encourages the citizens of Minneapolis who are predominantly black people to loot and burn down their community is part of the problem not the solution. Destroying where you live does not bring justice to George Floyd.”

The autopsy report came out on Mr. Floyd saying there was no evidence of strangulation or asphyxia. The story is changing right before our eyes. Was Mr. Floyd’s death a staged event? Will the truth ever come out? Will the DS police release Derek Chauvin from jail like they have done 12 other times? Why didn’t Chauvin’s neighbors even know he was a cop?

Trump and Barr have committed to get to the bottom of this. The Minnesota National Guard has been deployed. 500 soldiers to St. Paul and surrounding communities are in place to protect the rights of Americans. A curfew has been imposed. Remember, our President follows the rule of law.

Trump is using the same verbiage from others in the past who have incited violence. Twitter didn’t censor these people. Why not? Trump is poInting to the fact Twitter has been targeting conservatives. There are many!

The WHO and the CDC are clashing with their public information. The WHO is telling the public the only time healthy people have to wear a mask is if they’re taking care of a patient who has COVID-19. On the other hand, the CDC said we have to wear masks all the time. We know masks are not proven to be effective against COVID-19. Trump has decided to terminate our relationship with the World Health Organization.

Cue’s mission is to point investigative journalist in the direction of exposing illegal activity by the elites. We know especially with HRC, the elites play by a different set of rules. ‘Us common folk who happen to pay their salaries,’ are exposing their corruption. They are scared of public awakening, and resort to calling Cue names such as; a cult, a religion, a larp in an effort to silence us.  Cue is military intelligence working along side of the President to expose their corruption and to defeat them. Cue talks about peace, the rule of law and points Anons to specific topics of research.

The Deep State wants to destroy America. Who is the Deep State? You will know them by their symbolism. This will be their downfall.  Study it. Watch for it! Stand for Truth! Above all, pray!