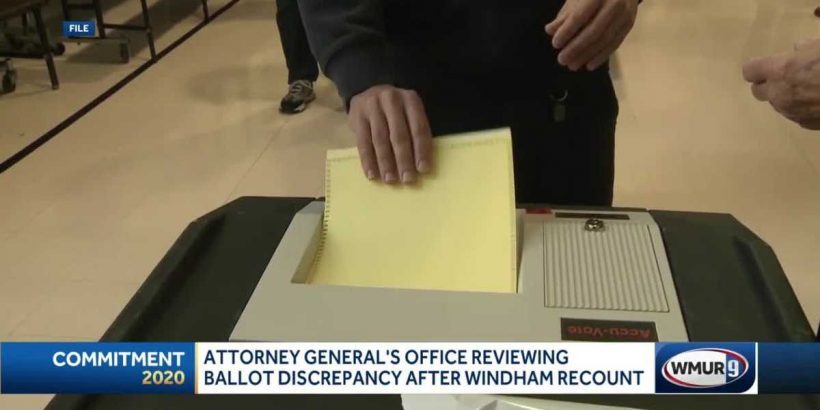 Auditors who are examining votes in Windham, New Hampshire, may have discovered why initial results showed a discrepancy in the vote count for a Democrat candidate.

Republicans in Windham, New Hampshire won all four seats in the legislative election on Nov. 3, but a Democrat candidate, Kristi St. Lauren, requested a recount, which was granted because she lost by just 24 votes.

However, during a hand recount, it was revealed that she didn’t lose by 24 votes. Instead, the effort revealed that the GOP candidates had actually received 300 additional votes, while St. Laurent lost 99 votes.

An audit was carried out to determine why there was a discrepancy in the initial results and the recount tally. Now, the auditors involved in the process have said that they may have discovered the reason why.

“We now have experimental confirmation that if the contest is undervoted, a fold through a vote target can create a vote. None of the 65 ballots [were] marked for St. Laurent, but the machines interpreted 25 of the folds as votes for her,” wrote the Twitter account, WindhamNHAuditors, which is operated by auditors Harri Hursti, Mark Lindeman, and Phillip Stark. It later clarified that it was 75 votes, not 65 votes.

The account included a photo of the fold lines in the ballots that are believed to have caused the scanner machine to interpret the fold lines as valid votes.

“Something we strongly suspect at this juncture, based on various evidence, is that in some cases, fold lines are being interpreted by the scanners as valid votes,” Lindeman, one of the auditors, told WMUR-TV.

The auditors, in another tweet, found that another machine had an “even more dramatic problem,” only counting 28 percent of the 75 votes for each Republican candidate in the contest.

The “school” machine has even more dramatic problem: counted only 28% of the 75 votes for each R candidate in this contest. #NHPolitics pic.twitter.com/rpvVljb7ww

“Because if someone voted for all four Republican candidates, and the ballot happened to have its fold line going through St. Laurent’s target, then that might be interpreted by the machines as an overvote, which would then subtract votes from each of those four Republican candidates,” Stark, an auditor, told the station. “Conversely, if there were not four votes already in that contest by the voter, a fold line through that target could have caused the machine to interpret it as a vote for St. Laurent.”

The fold effect is large enough to account for discrepancies, but might not be all that’s going on. 75 folded ballots voted straight Republican. Only 48 votes recorded for them. Folds generated overvotes. This is machine used on Election Day 4 most absentee ballots #NHPolitics pic.twitter.com/ykTm5t8pDG

St. Laurent told WMUR-TV that it appears that the fold frequently went through her name on the ballot, suggesting that’s the reason she received more votes during the initial tally.

“Wherever the fold happened to be was, I guess, most commonly through my name,” the Democrat candidate said.

One of the auditors cautioned that their work evaluating the election isn’t finished yet, saying that folding may not be the primary reason for the discrepancy

In a tweet on Sunday evening, Hursti noted their “work is not completed yet.”

“While the folding seems to be a strong contributor it clearly is not the only factor,” he wrote. “For example: We have observed vastly different error rates on two machines processing the same ballots.”

Both AccuVote, the machines involved in the audit and vote, and the New Hampshire Secretary of State’s office didn’t respond to requests for comment by press time.