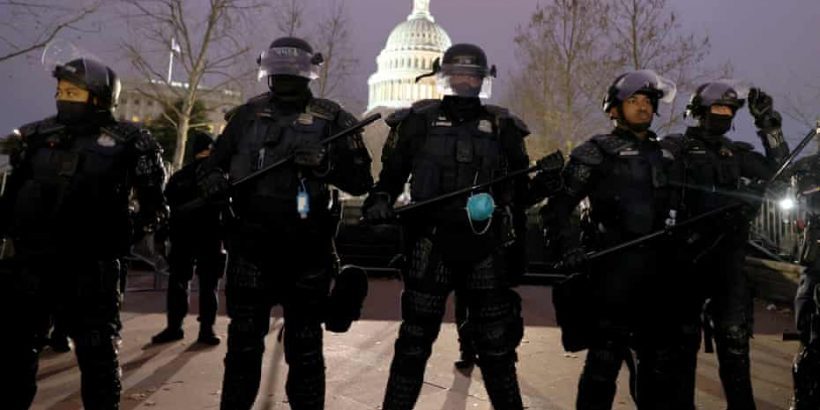 The season for potentially violent street protests is upon us, sparked by the latest police shooting of a black man in a suburb of Minneapolis.

Officers in Brooklyn Center, Minnesota, pulled over a car because it had an expired registration tag. They discovered the driver, Daunte Wright, 20, also had an outstanding warrant, reportedly for carrying a gun without a permit and running away from police last June. Wright resisted arrest and wriggled back into his car to flee. As police tried to subdue him, one officer yelled, “Taser, Taser!” but instead, the chief of police said, that officer accidentally pulled the trigger on her service revolver. The wounded Wright sped away, and minutes later, he was dead.

Wright’s foolish resistance sealed his fate. It also assured violent protests led by those shouting “Black Lives Matter!” and “You can’t stop the revolution!” would follow, both in Minnesota and several other states.

Just how looters stealing every flat-screen TV from Brooklyn Center’s Walmart achieves justice or satisfies claims of police discrimination against blacks is beyond me. And I can’t help but wonder what would have happened if Wright, and so many other suspects, had simply followed police instructions to surrender and face the consequences of their past bad choices.

As far as I can tell, only one state—Florida—is taking legislative steps to make sure rioting protesters are punished. For too long, and in too many locations, citizens have watched their police being attacked by a barrage of rocks, bricks, and blinding fireworks. They’ve endured rampaging demonstrators closing streets, setting fires, looting stores, and damaging government buildings and monuments. In way too many cases, only a few (or no) protestors were arrested and prosecuted.

In Florida, a bill is winding its way to a receptive governor entitled “Combatting Public Disorder.” In short, it would enhance punishments for a host of crimes perpetrated during a riot. Commit assault and battery against a cop or any first responder and face a felony charge. Damage a memorial or historic property and go straight to lockup. Incite a riot, fight in public during a protest, commit burglary (looting), block a public road or highway, or get caught with controlled substances and you will face enhanced penalties. Repeat offenders automatically face felony charges. Oh, and those taken into custody won’t get out while awaiting trial; they will remain behind bars until the court case is called.

Some believe this legislation discriminates against minorities.

“The people across the state of Florida are worried about the chilling effect of this bill,” African American state Sen. Darryl Rouson told the Tampa Bay Times. “This is going to lead to a misapplication of the law, and we know black and brown people will suffer disproportionately.”

Here’s an idea. Let’s instill in black, brown, white, and all colors of Americans who want to exercise their constitutional right to protest to keep it peaceful. A reasonable suggestion: If violence breaks out at a protest, you should promptly leave the area.

And while we’re passing along advice, how about if parents everywhere teach their children to obey a law enforcement officer’s command, because in most states, it is illegal to ignore such an order. Young people should learn that defying police only insures a swift and forceful response. If the officer is at fault, argue about it later; file a complaint; and maybe the end result will be a big monetary settlement.

We are in a terrible cycle. A slice of the citizenry says they don’t trust the police and want them defunded and disbanded. The media highlights their anger and destruction. Meanwhile, anxious police don’t trust that “peaceful protests” will remain nonviolent. When angry crowds converge and begin to throw things at cops, stomp on patrol cars, and try to destroy whole neighborhoods, officers are duty-bound to take actions to control the crowd.

Invariably, riots get ugly—sometimes deadly—but for police to stand down and fail to arrest lawbreakers only invites more costly destruction. That should never be tolerated.

I really like Florida’s get-tough approach. If someone loots, burns, or otherwise attacks people or property, they are a criminal and must be punished. More states should follow Florida’s lead.

Diane Dimond is an author and investigative journalist. Her latest book is “Thinking Outside the Crime and Justice Box.”