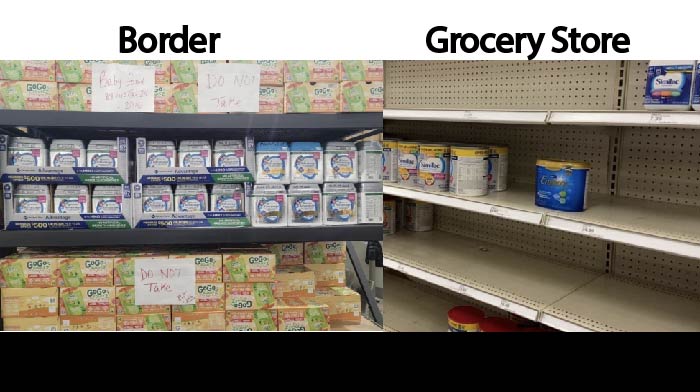 In a Facebook video, Rep. Kat Cammack (R-Fla.) made a blood-boiling accusation: Even as American parents face the prospect of being unable to feed their infant children adequately amid a worsening baby formula shortage, the Biden administration has been shipping pallets of formula to the Mexican border to hand out free of charge to foreign nationals who enter the country illegally.

“Something that I absolutely have to share with you right now is the craziness of the Bare-Shelves Biden movement and the fact that they are sending pallets — pallets — of baby formula to the border. Meanwhile, in our own district, at home, we cannot find baby formula,” said Cammack. She held up two photos, one of alleged bare shelves in a Target store. The second photo, says Cammack, was sent to her by a Border Patrol agent and showed plentiful stocks of baby formula at Ursula Central Processing Center in McAllen, Texas.

Cammack says that the agent who sent her the picture was enraged, reports the Washington Examiner:

She said the agent told her: “‘Kat, you would not believe the shipment I just brought in.’ He has been a border patrol agent for 30 years and he has never seen anything quite like this. He is a grandfather and he is saying that his own children can’t get baby formula.”

Immigration detention centers have long stocked supplies to tend to the needs of the illegals who sneak over the U.S. border on a regular basis. Once a starving infant or sick child is on its soil, no civilized nation can refuse him or her the food and care he or she needs. But with the massively increased influx of aliens lured across the border by Biden’s lax policies, the demand for supplies has ballooned. The situation, coupled with the Democrats’ destructive policies that have crippled the supply chain, has placed even higher demand on dwindling provisions. Now, American parents are placed in the harrowing situation of being forced to compete with foreign nationals for the most basic nourishment their children need to survive and thrive.

If only “President” Biden hadn’t petulantly halted construction of the great Trump wall, these thousands of destitute, needy families would be Mexico’s problem. Or maybe they wouldn’t have come at all.