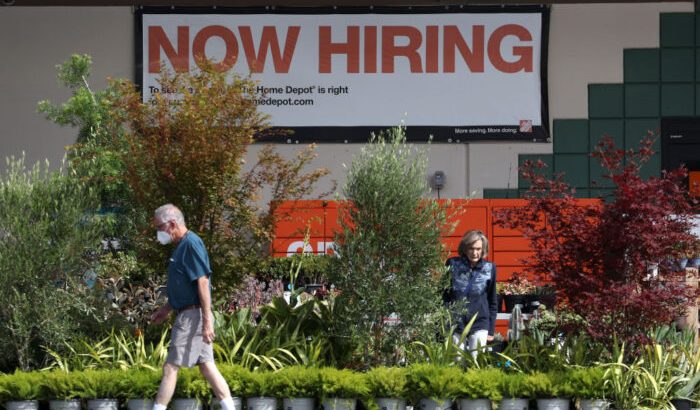 New government data reveal that the number of job openings in the United States fell by more than 1 million between July and August, a far sharper drop than forecasters expected and a sign of cracks in the labor market.

The Bureau of Labor Statistics (BLS) said in a report on Oct. 4 that the number of job vacancies on the last day of August was just over 10 million.

Forecasters were expecting around 10.5 million job openings in August, which would have been a more modest retreat from 11.2 million in July.

The move down in vacancies—the sharpest single-month drop since the start of the pandemic—suggests businesses are pulling back on hiring as the Federal Reserve tightens monetary policy and the economy slows.

The drop in the number of openings is likely to be seen as a welcome sign by the Fed that its inflation-fighting rate hikes are filtering into the real economy and denting the job market.

Fed Chair Jerome Powell said in September that he was hoping for vacancies to decline without an associated rise in unemployment.

“Job openings could come down significantly—and they need to—without as much of an increase in unemployment as has happened in earlier historical episodes,” Powell told a press conference on Sept. 22 (pdf).

Commenting on July’s figure of 11.2 million, Powell described it as “incredibly high relative to the number of people looking for work.”

The unemployment rate in August stood at 3.7 percent, with the Department of Labor set to release updated jobless data for September at the end of this week.

Harvard economist Jason Furman said in a statement that the reason the unemployment rate is so tight now is due to “sky-high” job vacancies and quits. Slightly more people quit their jobs in August than in July, Tuesday’s BLS data showed.

“If these can come down without much increase in unemployment, then inflation could get under control without much pain,” he noted in a post on Twitter.

While Furman’s remarks suggest that there is still a possibility for a so-called soft landing for the U.S. economy, a number of economists have predicted that a recession is not only inevitable but also that it will be painfully long and severe.

The job openings drop brings the ratio of vacancies to unemployed persons down from 2.9 in July to 1.7 in August, the BLS data showed.

“The Fed wants to get this back to the pre-pandemic 1.2, so a big step was taken here,” Liz Young, head of investment strategy at SoFI, said in a statement on Twitter.

The Fed still has a “way to go” to bring the labor market into more balance, “but it seems the trend is right,” Peccatiello said in a statement.

Some analysts saw the sharp drop in job openings as a sign that the Fed should hit pause on its aggressive rate-hiking cycle.

“The Fed needs to slow their hikes immediately given this data point,” Mike Konczal, director of macroeconomic analysis at the Roosevelt Institute, a left-leaning think tank, said in a statement.

It comes as the United Nations Conference on Trade and Development (UNCTAD) recently warned that continued rate hikes by the Fed and other central banks threaten a global recession and “worse damage than the financial crisis of 2008 and the COVID-19 shock in 2020.”

UNCTAD criticized aggressive rate hikes as an “imprudent gamble” that could “usher in a period of stagnation and economic instability for many developing countries and some developed ones.”

The Federal Reserve recently raised rates by 75 basis points, to a range of 3.0–3.25 percent, with Fed officials predicting rates to go even higher and remain at restrictive levels for some time.

Recent U.S. factory data showed manufacturing activity grew at its slowest pace in nearly two and a half years in September, as new orders and employment contracted. The Institute for Supply Management (ISM) survey, released on Oct. 3, showed that employment in manufacturing fell for the fourth time this year.