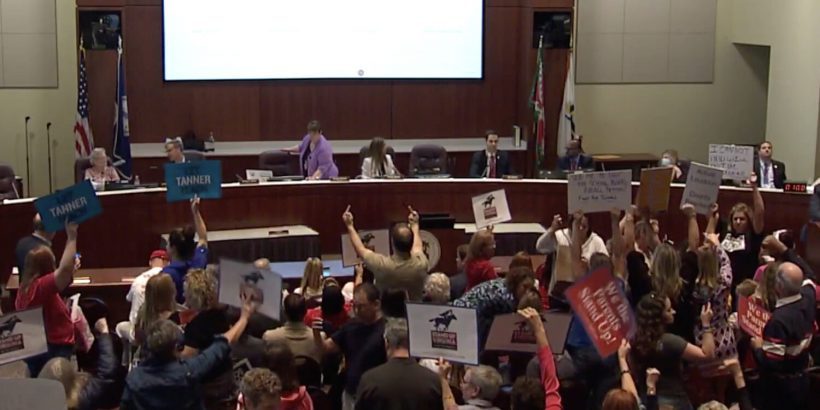 LOUDOUN COUNTY, Va.—The first school board meeting of the new school year opened in Loudoun county amidst sustained tension. On Aug. 10, scores of parents and citizens rallied to voice their disapproval of the board outside the school administration building. Over 170 people signed up to speak virtually and in person, compared to 259 at the previous meeting on June 22. The county in northern Virginia is west of Washington and one of the most affluent counties in the nation. [Lead photo was from a June 2021 meeting on the same topic]

A new public comment policy was in place—no audience was allowed during public comment, and speakers were admitted into the building in groups of ten. The reason for the change was “increased security in light of what happened at the June 22 meeting,” according to Wayde Byard, the Loudoun County Public Schools (LCPS) public information officer. The board ended public comment after the 50th speaker spoke on June 22 and two arrests ensued.

Instead of being allowed to wait in the building, registered speakers remained outdoors and were told to take shelter in their cars when a severe thunderstorm began at about 6 p.m.

The main agenda item was Policy 8040, which would require LCPS staff to address students with their preferred pronouns and allow transgender students access to bathrooms and locker rooms according to their self-identified gender.

The LCPS board is likely to approve and adopt Policy 8040, Rights of Transgender and Gender-Expansive Students, based on a July 30 memo by James Lane, Virginia’s Superintendent of Public Instruction. In the document, Lane stated, “Local school boards that elect not to adopt policies assume all legal responsibility for noncompliance,” referring to “Model Policies Concerning the Treatment of Transgender Students in Virginia’s Public Schools,” finalized on March 6, 2021. The memo also cited the dismissal of a complaint against the Virginia Department of Education as one of the key backgrounds for all division superintendents to adopt the policies.

Josh Hetzler, legal counsel with Founding Freedoms Law Center, represented the plaintiffs in the lawsuit. According to him, the judge’s July 27 opinion stated that non-compliant school districts are in no danger of losing funding because the “Model Policies” are merely guidance. He added the lawsuit was dismissed on the grounds of standing, not merit. Founding Freedoms Law Center is the legal arm of the Family Foundation, a non-profit, faith-based organization in Virginia.

About 80 percent of the in-person speakers spoke against the policy or the school board. Some parents strongly condemned the school board with word choices such as “disgusting,” and some pleaded for their children.

“I moved here eight years ago when this school system was a world-class educational system. The parents, the teachers, and administrators all worked together for the betterment of our children. But now, because of the decisions that all of you have made, I don’t believe that any child can get a quality education,” said Elicia Brand, who said she was struggling re-enrolling her kids to LCPS.

In the online policy review feedback released by the LCPS, (57 percent) of the 87 comments submitted in May through July were against Policy 8040. Twenty-five (29 percent) were for the policy and the remaining responses were questions. Safety and privacy were common concerns in the comments, “This is like giving an access for abuser and rapist a suitable environment.”

At the rally outside the school administration meeting, Hetzler of the Founding Freedoms Law Center announced a lawsuit against the LCPS board and Superintendent for violating Virginia’s Open Meetings Laws on June 22. “They appear to be doing again today by prohibiting members of the public from being physically present in the meeting room as they conduct their meeting,” he added.

Victoria Cobb, president of the Family Foundation, told The Epoch Times, “This county’s government has stepped well outside of the law in how they organize and how they vote, when they kicked out citizens of a public meeting, and then continue to do business.” She said that the goal of the upcoming lawsuit was to stop them from ever doing that and “send a message to every other school board here across Virginia that are also considering these controversial tough topics, to say you must take into account the voice of the parents.”

The board meeting went into recess at 8:30 p.m. and will resume on Aug. 11 to vote on Policy 8040. Cobb said she would expect more lawsuits representing parents or concerned citizens once Policy 8040 would take effect. According to public information officer Byard, once approved and adopted by the board, Policy 8040 would be effective in LCPS on Aug. 26 at the beginning of the new school year.