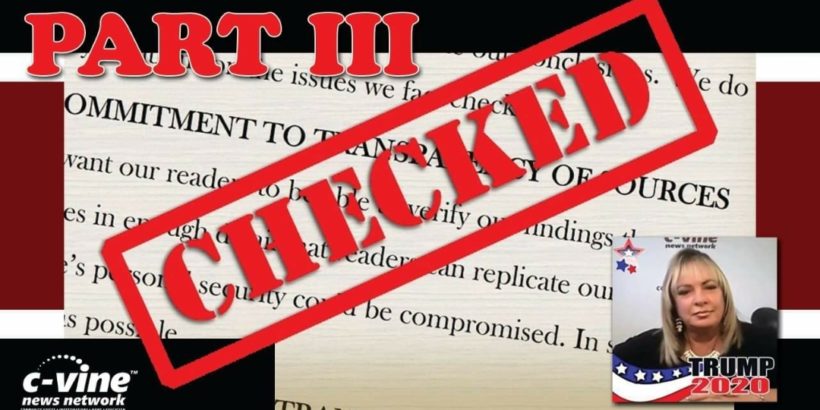 NewsGuard is “RATING” our C-VINE Website and They Previously Submitted a List of Questions and Concerns for US to Respond.

Below, is the C-VINE Response and Discovery Answers (In Maroon), to the NewsGuard Questions.

Since it has come to our attention that there is a great deal of concern about the legitimacy of Fact Checker and Rating Services… we at C-VINE have decided to make this RATING and Fact Checking process we have to go through, “PUBLIC” for our readers to watch. NewsGuard provides a “service” for We the People to warn and protect us from Fake News. They therefore should be open to scrutiny from the people they are serving.

Our members and volunteers are also investigating the history, background and track record of NewGuard.  You may join in the investigation process by looking closely at their website. We will be publishing the findings from our licensed investigators and general public after we receive our RATING from NewsGuard and will be reporting it back to you. Please take the time to review the following to assist us in our future report…

The Initial NewsGuard announcement to us, including the e-mail Request & Response is Linked Below at the Bottom.

Now let’s move onto this report of C-VINE being rated by NewsGuard….

1. In your previous email, you noted that C-VINE was set up so that it could never be owned by an individual. One of our criteria for transparency is disclosing a website’s ownership in a reader-friendly way. I see on the About Us page that you are identified as the website’s founder and architect—is C-VINE International the owner of the website? If so, is there a reason that that is not stated more explicitly?
.
C-VINE: On the “About Us” page you referenced, contains the following statement having to do with this question specifically; “C-VINE International is placed in a Charitable Trust to be run by the public and the leaders are elected as the Trustees. C-VINE is supported by monthly donations from members, time and expertise from volunteers and a nominal amount of revenue made from our on-line store. All content is available to read, even if not a member. Zero advertising is allowed”.
We also have similar statements made in Social Media and in my bio.  That being said…it couldn’t hurt to add additional statements to that effect and will do so.
“We The People” are C-VINE as the acronym points out and was placed in a Charitable Trust for them. I am just the catalyst who created it.
.
“We the People” provide this unpaid service FOR the people so our reader’s and listeners know content can be trusted. There are thousands who are very active in donating their time and expertise to do this.
2. You also noted that the site does not run advertisements and is not monetized in any way. I noticed that C-VINE has an online shop and also encourages readers to donate. Does that revenue go toward running the website?
.
Please acknowledge my complete answer because it already answers your question.
.
Also I need to add a correction… “it is not monetized in any SIGNIFICANT manner” as published on C-VINE website HERE and our complete answer included below;
“C-VINE was created specifically BECAUSE of rampant fake news. It was designed in such a way, that information from any source… is always vetted and researched before release.
No one is paid. NO ONE. Everyone is a volunteer. All funds donated, are to cover operating expenses or defray travel expenses if enough available. Many volunteers pay their own way.
Volunteers are highly skilled and trained, with years of experience in their area of expertise.
We are the workers who keep America running.
Retired Police Officers with Investigations background, Active Duty Officers, and Licensed Private Investigators, Licensed Investigative Journalists, Attorney’s from various fields, CPA’s, Book Keepers, Physician’s of all types, College Professors, IT, Webmasters, Graphic Designers, Retired Managers of all types, etc. etc.
Also included are 31,000 volunteers from our Research and Study Group on Facebook where we work together to discuss and debate the news with proven source always provided for others to fact check. We have a strict list of Rules that are enforced to keep conversation cordial and honest.
We encourage diverse opinions and debate, as long as it is respectful.
C-VINE is not a business, it is a Charitable Trust.  There are no advertisements. We are not monetized in a significant way.” ~~~ End Quote
But to add clarity, NO, funds raised do not go for just running the website, although membership donations are the only consistent group of monthly revenue we have. The membership and nominal amounts made from the store covers that. Many charities, clubs, etc. do the same…including some churches.
.
We do hold periodic fundraisers for various projects that require travel expenses, food, and lodging for volunteer citizen journalists to cover the pre-trial, 9/11 tribunals for KSM et al, streamed LIVE out of GTMO and viewed in Ft. Meade Military Base. It is hoped we will raise enough for these expenses to cover it… Or there may be other news located out of state, where the same types of expenses are hoped to be covered. If enough isn’t raised (which is usually the case) it comes out of their own personal pockets.
3. Does C-VINE have a corrections policy for its news stories?
Our “policy” is honesty and integrity in all things. Again, we aren’t a business and do not have official policy manuals. Our members and/or social media groups, is where investigations, discussion and debate takes place. This is basically a C-VINE study group and is our guide for corrections. All is done with transparency in front of We the People in the following C-VINE Face Book Group with 31.8K active members. Admins do the initial vetting of news stories, the members check our work and determine when we need to make corrections on the website.
The following are the RULES, prominently displayed at the top of the C-VINE GROUP under “ANNOUNCEMENTS” 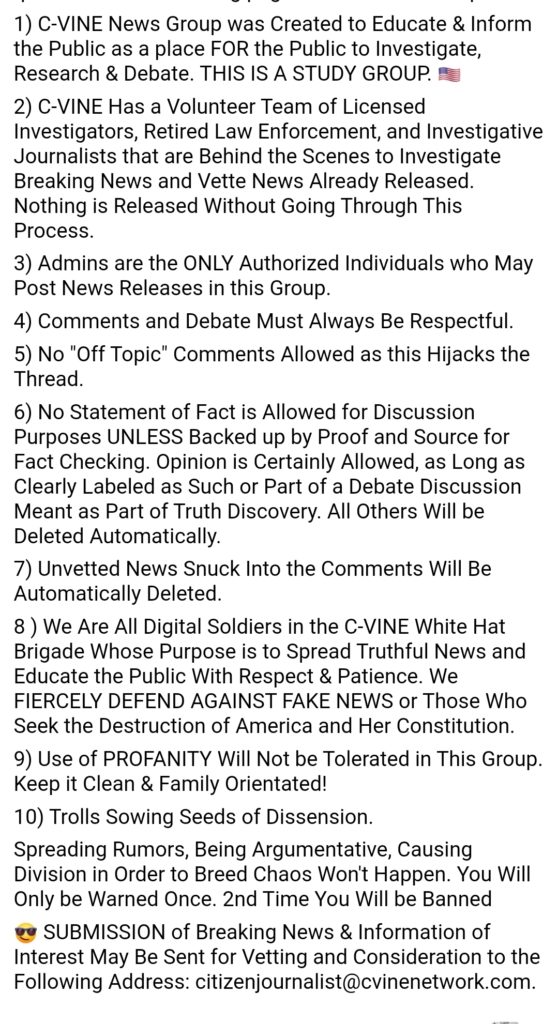 Our criteria require that sites regularly correct errors to stories, and we need evidence of a few examples from within the past year. I found one correction in an undated article (https://c-vine.com/blog/2018/11/14/breaking-over-100-senior-citizens-missing-in-californias-camp-fire/) and another in a reprint from the Epoch Times (https://c-vine.com/blog/2020/05/20/coronavirus-round-1-restrictions-easing/), but I would appreciate some more recent examples. Would it be possible to send some my way?
Since we have so many people carefully vetting before we place articles on the website where most are already vetted, we rarely have to go back to do corrections. If something turns out to be proven wrong, we usually just remove it from the website and make an ANNOUNCEMENT to our members on the C-VINE Facebook Group that includes source for the reason why. Our News Group in very interactive.
4. How does C-VINE differentiate between news and opinion content? I noticed that some articles include “Opinion” in the headline, but others include an “opinion: author name” tag at the end of the articles while being filed in the Breaking News section. Do you consider the latter to be adequate disclosure that the article is opinion?
Thank you for pointing this out.  If you would have scrolled down the page, we have a “Community Commentary” Category that is our “Opinion” Section.  But, since you brought this up, we have changed the name now to “OPINION” to give more clarity. Also, there are occasional times we add an Opinion piece onto the Breaking News Category in addition, in which case, we add the word “Opinion” in the title.
5. I noted several instances of apparently misleading and false information on the website, as well as misleading or false headlines. I would appreciate your comment on these specific examples (I’m including article names and dates as requested):
I appreciate your time and look forward to hearing back from you.
Thanks,
Anicka

Initial e-mail request (screenshot) from NewsGuard to C-VINE  BELOW. 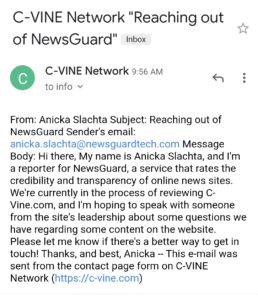 Response to Initial email and link to END REPORT, PART I,  HERE