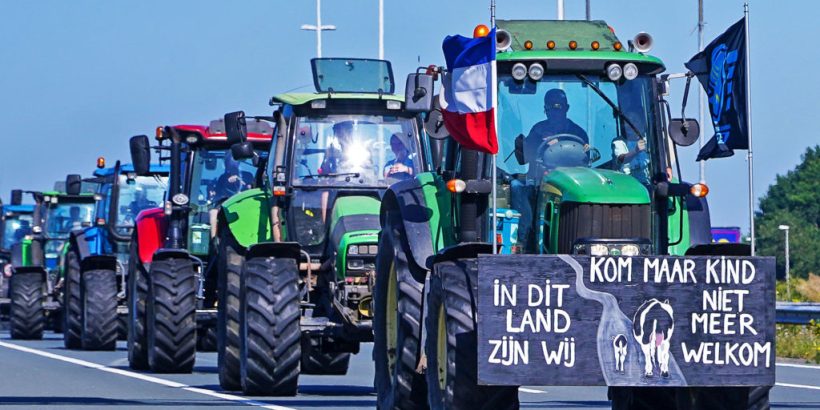 The same climate policies that are set to destroy private agriculture in the Netherlands are eventually coming to America.

Americans should start paying closer attention to the ongoing farmer protests in the Netherlands, which this week transformed long swaths of Dutch highways into what looked like a post-apocalyptic warzone: roadside fires raging out of control, manure and farming detritus heaped across highways, traffic stalled for miles, and massive protests across the country in support of the farmers.

Why is the Netherlands, of all places, experiencing such unrest? Americans need to understand what’s happening over there because the ruinous climate policies that triggered these protests are precisely what President Joe Biden and the Democrats have in mind for the United States.

Specifically, Dutch farmers are protesting a government plan to cut fertilizer use and reduce livestock numbers so drastically that it will force many farms out of business. Earlier this month, farmers used tractors and trucks to block highways and entrances to food distribution centers across the country, saying their livelihood and way of life are being targeted by the government.

And they more or less are. The ruling coalition government claims its radical plan, pushed by Prime Minister Mark Rutte, who branded the protests “unacceptable,” is part of an “unavoidable transition” to improve air, land, and water quality. The goal is to reduce emissions of nitrogen oxide and ammonia, which are produced by livestock but which the government is labeling “pollutants,” by 50 percent nationwide by the year 2030.

The only way to do that, many Dutch farmers say, is to slaughter the vast majority of their livestock and shutter their farms. The government knows this and admitted as much earlier this year, saying in a statement, “The honest message … is that not all farmers can continue their business,” and that farmers have three options: “Becoming more sustainable, relocating or ending their business.”

The genesis of the scheme was a court ruling from 2019 that said the Dutch government’s plan for reducing nitrogen emissions violated EU laws protecting its Natura 2000 network of supposedly vulnerable and endangered plant and animal habitats — basically a bunch of EU-governed wildlife preserves. These sites span the EU, covering 18 percent of the bloc’s land area and 8 percent of its marine territory.

To protect these wildlife preserves, Dutch farmers are being told they must submit to their government’s ruinous emissions plan.

But the Natura 2000 preserves are only part of the story. European leaders such as Rutte are environmental ideologues who want to transform global food production and eliminate private land ownership, and he sees an opportunity in this court order to reshape agriculture and land use in the Netherlands.

Indeed, Rutte — a walking embodiment of the Davos Man if there ever was one — is a big proponent of the United Nations’ “Agenda 2030” and its Sustainable Development Goals, which aim to squeeze farmers and ranchers around the world in order to reduce “emissions.” The policies that flow from these goals, such as drastically reducing the use of fertilizer, contributed to the recent economic collapse of Sri Lanka, which triggered mass protests that toppled Sri Lanka’s government and ousted its president earlier this month.

Last year, Rutte spoke to the World Economic Forum about “transforming food systems and land use” at Davos Agenda Week, announcing that the Netherlands would host something called the “Global Coordinating Secretariat of the World Economic Food Innovation Hubs,” whose job would be to “connect all other food innovation hubs.”

In Davos-speak, that means agricultural production and the supply of food will be centrally controlled by intra-governmental bodies and “stakeholders” consisting mainly of the world’s largest food corporations and international NGOs. Private farms and independent farmers will be a thing of the past, supplanted by global bodies making decisions about how much and what kinds of food are produced. The private sector and the independent farmers will have no place in the future that the UN and the WEF are planning.

Dutch farmers understand this. They know Rutte and his ministers want above all to eradicate their farms and way of life. But they’re not going down without a fight.

All of which brings us back to the U.S. This week news broke that congressional Democrats had finally reached a deal on the largest piece of climate legislation in American history. The bill is a tax-and-spend cornucopia of some $369 billion for wind, solar, geothermal, battery, and other industries over the next decade, along with generous subsidies for electric vehicles and incentives to keep nuclear plants open and capture emissions from industrial plants.

After pretending to oppose Senate Majority Leader Chuck Schumer’s climate legislation, West Virginia Sen. Joe Manchin relented this week, clearing the way for the bill to proceed. Senate Democrats say the bill will allow the U.S. to cut greenhouse emissions by 40 percent below 2005 levels by 2030 — matching up nicely with the UN’s “Agenda 2030.”

Understand that the Senate bill isn’t the end, it’s the beginning. Climate activists and ideologues are working at the highest levels to transform not just the global food supply, but the nature of private property and property rights, all in the name of saving the planet. What Rutte and his government are doing to Dutch farmers, Schumer and Biden are planning to do to American farmers and American industries.

So, pay attention to the roadside fires and blocked highways and mass civic unrest in places like the Netherlands and Sri Lanka. America is next.