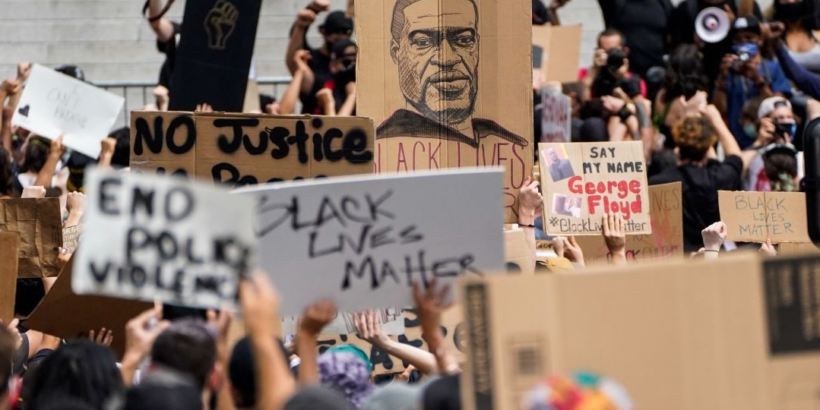 SAN LUIS OBISPO, CA – The saga of Tianna Arata, the woman arrested for organizing and being part and parcel of a violent protest that took place in July in San Luis Obispo, continues.

Although, the latest development in matters revolving around Arata stems from her own mother, Michelle Arata, who is demanding “reparations” from local businesses who haven’t supported Black Lives Matter.

You need to read this. This isn't about protesting any more this is extortion
Protesters demand money from San Luis Obispo business owners – https://t.co/AlHAdbyQaS

The businesses in question were targeted specifically after Michelle Arata “compiled a list” – her own words – of businesses that were “slandering” Black Lives Matter by “boarding up their shop.” She’s demanding “reparations” in an amount “equivalent to the amount of money and time they spent … boarding up shops.”

Basically, Michelle Arata thinks that business owners trying to protect their investment by boarding up their windows while miscreants run wild under the guise of a protest are perpetuating “fear and hate” and thus these businesses need to pay up.

So, while it doesn’t exactly quite fit the confines of extortion, it certainly bears a striking resemblance to the tactics.

The businesses were said to have had either letters sent directly to them, or people claiming ties to the BLM movement showed up in person demanding money to be directed toward either the Black Lives Matter foundation or to R.A.C.E. Matters SLO.

All the protests that have transpired in San Luis Obispo have revolved around George Floyd, typically demanding justice for him.

And yet … the San Luis Obispo Police had zero to do with George Floyd, and all four officers in Minneapolis involved in the case were fired, arrested and charged, and are thus going through the legal process. Looking at that with an honest perspective, one really couldn’t ask for more than just that regarding the case.

Several local business owners told the news outlet Cal Coast News about the harassment they’ve endured for not paying money to Black Lives Matter. According to the outlet, non-paying businesses endured the following:

“A handful of business owners, many afraid to have their names disclosed because of fears of retaliation, said the message was followed by a phone call that included name-calling, another request for money and a personal visit.”

Numerous business owners stated that both Tianna and Michelle Arata were among those who showed up in person to demand money in certain instances.

Furthermore, the attorney working with Arata in her criminal case is actually threatening to send protesters to the home of San Luis Obispo County District Attorney Dan Dow:

“[Dan Dow], you have a very small window of time to drop these charges before your county, city and home are bombarded by activist[s] from all over the country. Find out of this is an idle threat if you want to.”

This is the attorney that got on TV w/ BLM leader Tianna Arata to defend her. Now he’s threatening the local DA. Asshole needs to be reported to the state bar. #LawAndOrder @X22Report @elenochle @RealJamesWoods @realDonaldTrump pic.twitter.com/6dbOOhF3QG

Attorney S. Lee Merritt is one of the vocal supporters who are acting as though Tianna Arata is something akin to a political prisoner rather than someone arrested for enabling and participating in a violent riot.

While reports have circulated about “freeing” Tianna Arata, the District Attorney’s Office released a statement saying that was released from custody roughly two hours after her arrest.

To all following #FreeTianna: Ms. Tianna Arata is NOT in custody now and has not been in custody since she was released within 2 hours of her arrest by #SLOPD. The case is under careful review by this office. A decision will be made after fully reviewing all available evidence.

We’ve been tracking the case of Tianna Arata for some time on Law Enforcement Today, here’s our previous report on her arrest and actions that led up to it.

SAN LUIS OBISPO, CA – A New Jersey woman is facing years behind bars after organizing an unlawful protest that resulted in a child being hurt.

That woman is Tianna Arata, a so-called leader of the Black Lives Matter Movement.

The 20-year-old, barely-legal adult decided it was time to stage a protest against the big bad police for “targeting people of color unjustly.”  If only she had spent any amount of time in her so-called education to research for herself if there really is a problem in policing before she decided to mount a “protest.”

Arata would have found, if she had only spent the time, that police officers kill, unjustifiably or not, far more white people each year than they do people of any other race.

Before we dive into the details of the protest … some facts are important here.

Sure, there are people who will argue that minorities make up a smaller portion of America so the rate would be less, but, given the demographics, if there were truly systemic racial issues with policing, regardless of race, the majority of people killed by police would show black people far more than white.

Let us focus on that point for the moment. In 2019, 998 people were killed by police. 998 people out of the entire population of the United States, roughly 328.4 million people. 998 people killed, not mentioning the reasoning behind why they were killed, regardless of race, at the hands of police.

Of those people killed, justifiably or not, per the Washington Post, an extremely left-leaning publication, 403 of those people were white, 250 were black, and so on.

What the liberal media will not tell you is that those numbers perfectly match up to the makeup of the nation. Therefore, if there truly were systemic racism in policing, the numbers would predominately show black people, or at least people of color, as being the majority of those killed by police.

Since that obviously is not the case (look for breakdown by race), then systemic racism in policing cannot be true. It is like the errant O.J. Simpson trial, only this time true, if the glove doesn’t fit, you must acquit.

In this case, Tianna Arata decided that she needed to stage a protest over what she errantly believes is racial inequality with policing. She spoke to members of the San Luis Obispo Police Department and ensured them that the protest would be civil and peaceful. It turns out that she was wrong.

Whether or not Arata meant for the protest to remain civil does not matter. It would be like you serving alcohol to someone that dies or goes out and kills someone because they are drunk.

Regardless if you actually were the one who killed someone or not, you are responsible for providing the environment for that specific crime to occur. In other words, if Arata had not planned that protest, no crime would have been committed.

she should NOT be facing 15 years in PRISON FOR ORGANIZING A PROTEST. REPLY TO THIS TWEET WITH #FREETIANNA !!!!!! pic.twitter.com/BXHcHNMUFi

In this case, the young and naïve Arata staged a protest in which people got hurt. In this specific case, a very young child.

The protest, whether planned this way or not, found almost 300 people in attendance. People got out of hand and turned the peaceful nature into chaos. Demonstrators entered the roadway while people were trying to drive down it.

She deserves what she gets https://t.co/CluaLNUK0q

Any sane person would not indiscriminately attack a vehicle – let alone carry on their attacks on at least two separate vehicles in the area.

With common sense apparently lacking, Arata and her friends do not believe that she should be held accountable for the actions she caused when she decided to do the protest.

However, if the evidence shows that a police officer does not intend for someone to get hurt, Arata and her supporters nonetheless believe that the officer should be held responsible. Where is the common sense in that mindset?

Tianna Arata is a terrorist and so are her ilk. Arrest them all, lock them up for the maximum sentence, no chance of parole. https://t.co/g8mSgyWmj4

Apparently, the County District Attorney in San Luis Obispo agrees that Arata should be held accountable for the actions she caused. The DA filed charges on her for five felony charges, including four counts of felony false imprisonment and one count of conspiracy.

Her so-called intelligent friends believe that Arata should not have been arrested. A person who claims to be her best friend calls the arrest a kidnapping, which could not be further from the truth.

A very simplified explanation of an arrest is this: when officers have determined there is probable cause (roughly at least 51%) that the person did the alleged crime, it is a lawful arrest. A kidnapping would be someone unlawfully grabbing someone and holding them against their will with no lawful reason. There is more to kidnapping but that is a basic explanation.

In this case, Arata was lawfully arrested with the least amount of force necessary.

Video which shows her arrest shows that she is not willing to walk with officers to their cars, but, she does not actively resist their efforts. This is what police refer to as passive resistance. People in the crowd are heard saying Arata was not resisting, but, she in fact was by not walking to the police vehicle.

“I just turned 20 last month, there’s so much that I want to accomplish. And I’ve been through so much struggle in my life that dealing with this, it’s just, like, I want to be able to overcome it and to go on to the new steps in my life.”

Perhaps Arata should consider what the facts are that she is marching against prior to staging a march.  Even if she does not in the future, maybe, just maybe, she should ensure that what she is organizing will not bring crime.