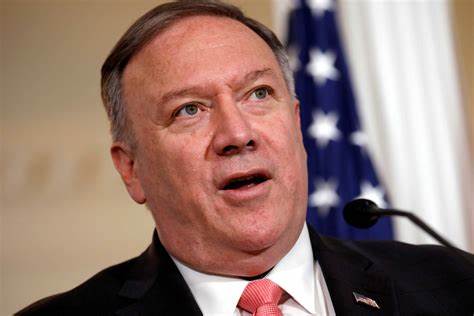 Former Secretary of State Mike Pompeo during a May 6 press conference raised concerns over the candidacy of Trump-backed Pennsylvania GOP Senate hopeful Dr. Mehmet Oz over his Turkish citizenship, joining a chorus of GOP critics of Oz’s dual citizenship.

Oz, who is a dual Turkish and U.S. citizen, has been embroiled in controversy over his citizenship for some time.

On March 16, Pennsylvania news outlet PoliticsPA reported that Oz had said he would forego security clearance in order to keep his citizenship.

According to the report, Oz explained that he keeps his Turkish citizenship in order to return to Turkey and care for his aging mother, who has Alzheimer’s disease. “I can love my country [the United States] and love my mom,” Oz reportedly said.

Former Republican candidate Sean Parnell—who dropped out of the Pennsylvania Senate race in November 2021—responded on social media, saying, “This is disqualifying.”

Under current U.S. law, dual citizens are permitted to gain security clearance so long as they do not live in, vote in, receive benefits from, or carry the passport of the country in which they have dual citizenship.

Still, following the storm that erupted over the issue, Oz told Fox News in March that he would give up his Turkish citizenship if elected.

During a May 5 press conference, Mike Pompeo broke with President Donald Trump, who recently endorsed Oz, over the issue.

“Maybe it’s all innocent, maybe it’s all straight up,” Pompeo said, “but we and the people of Pennsylvania and the Americans who he will be representing as one of the 100 members of the United States Senate voting on important national security matters need to understand the scope and depth of his relationship with the Turkish government.”

Pompeo admitted that there are no legal issues over the candidacy since Oz is a U.S. citizen, but contended that it’s an issue of who is “best suited” to serve in the seat—suggesting that Oz’s ties to Turkey may prevent him from putting the interests of American citizens first.

Previously, Pompeo added, the state was represented by “patriotic American conservative” Sen. Pat Toomey (R-Pa.), who will be retiring at the end of the 117th Congress.

“Dr. Oz has already said when elected to the Senate he would renounce his citizenship,” Yanick said. “There is no security issue whatsoever, and David McCormick knows that Dr. Oz has maintained his dual citizenship to make it easier to help care for his mother who has Alzheimer’s and lives there.”

After the controversy flared up in March, Oz said that the citizenship issue had become “a distraction” in the campaign.

“I maintained it to care for my ailing mother, but after several weeks of discussions with my family, I’m committing that before I am sworn in as the next U.S. Senator for Pennsylvania I will only be a U.S. citizen,” Oz said in comments to Fox News.

The issue has long been an important one to Oz’s opponents, and some say that the promise is too little, too late.

In February, a spokesman for David McCormick, a rival Republican candidate, said that “voters of the Commonwealth of Pennsylvania have a right to ask why Cleveland, Ohio-born Mehmet Oz won’t renounce his Turkish citizenship and why he chose to serve in the Turkish military over America’s military.”

In a statement to The Epoch Times, McCormick’s campaign added, “The people of PA deserve a U.S. senator who will serve their interests and their interests only—and not be conflicted on some of the most important security issues facing our country. Mehmet Oz sought out and maintains to this day dual citizenship with Turkey and chose to serve in the Turkish military.”

McCormick rejected Oz’s contention that the issue was a “distraction.”

“Mehmet Oz was born in the U.S. and, as an adult, sought out dual citizenship with Turkey—a country often hostile to the United States. He chose to serve in Turkey’s military, he has connections to both the Turkish military and Erdogan government, and has significant financial assets in Turkey,” the campaign said. “Having such strong connections to a country with a history of hostility to U.S. interests raises significant concerns about where his loyalties lie. This is no distraction, this is rightfully a real concern for many voters.”

“Oz is now saying he would renounce his dual citizenship to Turkey but only on the condition that the people of PA elect him to the U.S. Senate first,” the statement said. “If you’re a PA voter rightfully concerned about Mehmet Oz’s Turkish military and government ties, his response to you is you must elect him to the Senate first before he does anything to alleviate your concerns.

McCormick added a renewed call for Oz to renounce his Turkish citizenship: “He claims to put America First—then why doesn’t he today?”

In a statement to another news outlet, Oz called the demand “disgraceful” and “bigoted,” and said it was “reminiscent of slurs made in the past about Catholics and Jews.”

“It is a sign of McCormick’s desperate campaign that he has resorted to this disgraceful tactic,” Oz added.