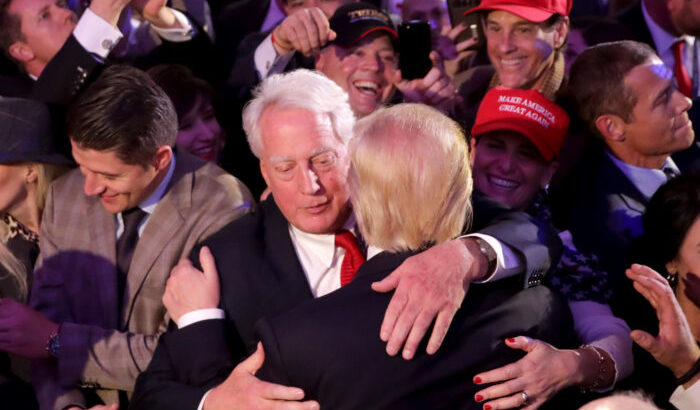 President Trump, we mourn with you. Our hearts go out to you.

He was his “best friend,” and “losing him” is going to be quite hard, the president said.

Trump on Death of Brother: He Was His ‘Best Friend,’ Losing Him Is Not Easy

Epoch Times
BY JACK PHILLIPS
President Donald Trump on Monday spoke more about his brother, Robert, who died on Saturday night, saying that it won’t be an easy loss.

It’s “not [been] a great weekend,” Trump told Fox News. “He was a great guy. He was a tremendous guy,” Trump added.

He was his “best friend,” and “losing him” is going to be quite hard, the president said.

The White House confirmed over the weekend that Robert Trump died at age 71. It’s not clear what his cause of death was.

“He was always there and … he wasn’t a jealous person,” Trump remarked. “He was a very smart guy … he would be there and he’d be behind me.”

“When I became president … he was one of the most loyal people. There was no jealousy,” Trump added. “You know, in a lot of families—I hate to say it—but there’s jealousy” and competition.

“He was my biggest fan,” he added, saying that people would tell him that Robert was “so thrilled” what “was happening for the country” after President Trump was elected. “He was so angry with China because they allowed the plague to come in … and allowed it to happen. They could have stopped it.”

Trump was referring to the pandemic caused by the CCP (Chinese Communist Party) virus, a novel coronavirus that causes COVID-19.

The president visited his brother at a Manhattan hospital on Friday. Before that he disclosed his brother was in “bad shape” but didn’t say what the cause was.

“It is with heavy heart I share that my wonderful brother, Robert, peacefully passed away tonight,” he said in a statement. “He was not just my brother, he was my best friend. He will be greatly missed, but we will meet again. His memory will live on in my heart forever. Robert, I love you. Rest in peace.”

Robert Trump had previously retired to upstate New York where he was a noted philanthropist, serving as a trustee for the Angels of Light, a non-profit organization that provides holiday gifts to children with life-threatening illnesses.

Before that, Robert Trump told the New York Post that he supported his brother’s campaign “1,000 percent” in 2016.

Fred Trump Jr., the president’s older brother and Mary Trump’s father, died in the early 1980s at the age of 43 after battling alcoholism for years. The early death had an impact on Trump, who said he never drinks because of it.