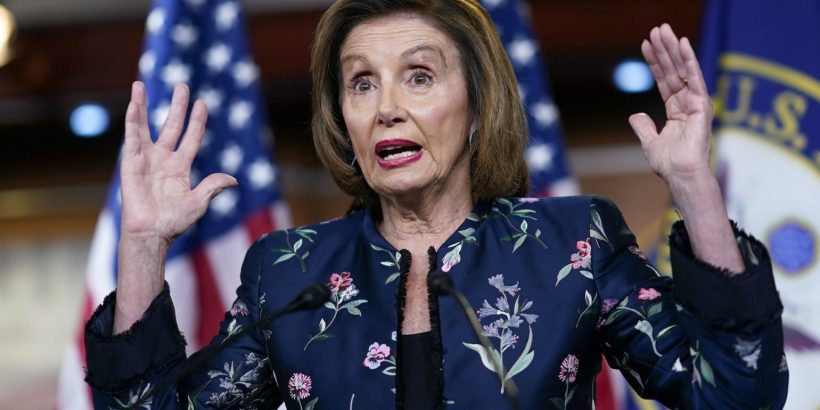 According to a draft opinion leaked to Politico on May 2—written by Justice Samuel Alito and confirmed as genuine by the court—a majority of the justices have agreed preliminarily to overturn Roe v. Wade.

The court has not yet issued a final opinion.

Under the 1973 standard, states are prohibited from imposing restrictions on abortion in the first trimester, during which SCOTUS ruled that the mother’s right to privacy outweighed state interest in protecting life. The move effectively overturned existing abortion laws in over two dozen states, and since then, pro-life advocates have fought to return the power to regulate abortion to the states.

If SCOTUS follows through with the draft decision and officially overturns Roe v. Wade, Democrats have few options to counter the decision.

In view of this, some pro-abortion Democrats have shifted their ire from the Supreme Court and Republicans to a new target: Democratic leaders who, in their view, did not do enough to protect access to abortion.

On May 11, a crowd of pro-abortion advocates gathered at Pelosi’s California home, accusing her of being “complicit” in the possible reversal of Roe v. Wade, Fox News reported.

“We are here because the Democratic Party and the Democrats as a whole have been complicit in this whole thing,” one protester shouted into a megaphone.

A banner behind the female speaker read: “Abortion on demand and without apology!”

Other signs in the crowd showed the faces of the five GOP-appointed justices who reportedly voted in favor of overturning Roe v. Wade—Justices Samuel Alito, Clarence Thomas, Amy Coney Barrett, Neil Gorsuch, and Brett Kavanaugh—with the word “LIAR” emblazoned over their portraits.

“We are here because this draft decision is what it is, it’s only a draft, and we will protest here, in front of the leadership of the Democratic Party, and in the streets from coast to coast, unceasingly, because we work to keep abortion legal—legal and accessible, not rare,” the protestor said.

“Hillary Clinton, who started the whole thing like ‘abortion should be legal, but rare,’ as if abortion is a tragedy,” the protester continued, citing a common refrain among Democrats in the 1990s and early 2000s. “We are here to say abortion is a basic right, a basic human right, and without this right, women are basically enslaved. And we will not stand for it.”

Finally, the speaker turned her attention on Speaker Pelosi’s alleged “complicity” in the possible SCOTUS decision.

In May 2017, the protestor noted, Pelosi had suggested that Democrats were focusing too much on the abortion issue, and warned that the issue should not become an ideological purity test during primaries.

Another protestor echoed the sentiment.

“Speaker Pelosi, this will be your legacy, 35 years of your reign of terror,” the male speaker said. “You had a supermajority under Obama under which this should have been your top priority.”

Briefly following the 2008 election, Democrats achieved practically unchallenged control of the government after the party took a filibuster-proof 60 seats in the Senate in addition to a majority in the House and control of the White House.

Though Democrats took advantage of the supermajority to pass the controversial Affordable Care Act, known informally as Obamacare, in a 60–39 vote, they made no headway in the long-held aspiration among Democrats to codify abortion into into federal law.

This, the male protestor alleged, was intentional on Pelosi’s part.

“Why did you keep this on the table?” He asked. “Because this is your most effective fundraising tool. That’s why.”

Democrats are once again in control of the White House and both chambers of Congress, but with a narrower margin than before.

On May 11, the Senate will vote on the Women’s Health Protection Act, a bill designed to codify Roe v. Wade. However, due to unilateral opposition by Republicans—and possible opposition by swing-voting Sen. Joe Manchin (D-W.Va.)—the measure is not expected to pass.

Aside from a bill codifying the decision, there is little that Democrats can do to counter it if SCOTUS votes to overturn the 1973 decision.