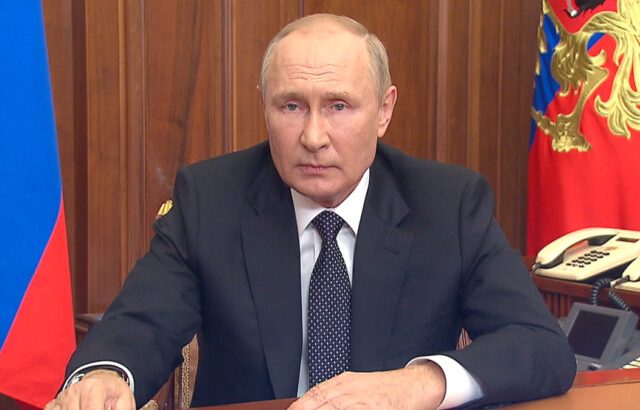 Russian leader Vladimir Putin announced the beginning of a partial military conscription in a speech on Monday in which he accused the West of “nuclear blackmail” and trying to “destroy” Russia.

Vladimir Putin has announced the beginning of conscription measures in Russia in response to growing difficulties the country is facing with the Ukraine war, a move that potentially represents a significant escalation of Moscow’s already bloody conflict.

The announcement was made as part of a rare public address given by the Russian president to the citizens of his country, during which he also accused Western powers of ultimately aiming to “destroy” Russia.

While disinformation in relation to the ongoing conflict is widespread, there now appears to be consensus at least that the invasion is not going as well for Russian forces as the Kremlin might have initially hoped. The new Russian conscription measures are likely aimed at making available more troops for the conflict in an attempt to rescue what Russia has euphemistically termed its “special military operation” in Ukraine.

In the speech given on Wednesday morning, Vladimir Putin repeated Russian claims that the invasion of Ukraine was purely defensive in nature, and specifically aimed at protecting “Russia’s Crimea” as well as the Donbas regions – which has a sizable population of ethnic Russians – from alleged aggressive measures taken by the Zelensky administration in Kyiv. Putin seized and colonized Crimea in 2014.

Putin accused the Ukrainian government of organising a “genocide”  in the Donbas against people “who refused to recognise the government that was created in Ukraine” as a result of what the Russian head of state described as a Western-backed “state coup” in 2014.

The “coup” Putin referred to is known in Ukraine as the Maidan uprising, a wave of protests that resulted in the ouster of pro-Russian President Viktor Yanukovych. Russian officials have repeatedly argued that current Ukrainian President Volodymyr Zelensky is illegitimate because of the events of 2014, despite him being elected in 2019 against the incumbent who succeeded Yanukovych, Petro Poroshenko. No international observers or dissidents within Ukraine have questioned the legitimacy of the 2019, even those opposed to the 2014 Maidan.

Putin also alleged that Moscow’s interests of securing the Donbas and Crimea were actually met with much understanding by Ukrainian officials in the wake of peace talks early on in the war, but that such peace talks were ultimately sabotaged by Western leaders, who Putin said urged Ukraine to keep fighting the conflict.

“In its aggressive anti-Russian policy, the West has crossed every line,” Putin said. “In Washington, London, Brussels, they are directly pushing Kyiv to transfer military operations to our territory. No longer hiding, they say that Russia should be defeated by all means on the battlefield, followed by the deprivation of political, economic, cultural, in general, any sovereignty, with the complete plunder of our country.”

Putin also accused the West of threatening Russia with “nuclear blackmail,” saying that his country was willing to defend itself by any means necessary. Putin appeared to threaten the possible use of nuclear weapons himself, should Russia’s “territorial integrity” be threatened.

“I would like to remind those who make such statements regarding Russia that our country has different types of weapons as well, and some of them are more modern than the weapons NATO countries have,” he said.

“In the event of a threat to the territorial integrity of our country and to defend Russia and our people, we will certainly make use of all weapon systems available to us,” Putin continued, before warning that this threat of retaliation was “not a bluff”.

Arguing that the Russian military was now effectively fighting “the entire military machine of the collective West,” Putin declared that he has begun the “partial mobilization” of the Russian Federation for the purpose of aiding the war effort.

Such a new mobilization, which Reuters says is the first of its kind in the country since World War II, includes the implementation of conscription for the military, though Putin argued that such a measure will be extremely limited in scope.

“I repeat, we are talking specifically about partial mobilization, that is, only citizens who are currently in the reserve will be subject to conscription, and above all those who served in the Armed Forces, have certain military specialties and relevant experience,” he said, before going on to say that every individual conscripted would “receive the status, payments and all social guarantees of military personnel serving under a contract.”

The mobilisation will likely give Russia’s now floundering war effort in Ukraine a shot in the arm. Reuters reported the country’s Defence Minister Sergei Shoigu said that as many as 300,000 people could be conscripted for military service from Russia’s massive reserves of around 25 million people.

Putin also called on the status of volunteer soldiers, as well as troops from the Russian-allied self-declared Republics in eastern Ukraine, to be regularised and given the same legal status as the rest of Russia’s troops fighting in the region, as well as provided with the same “material, medical and social benefits.”

UK Defence Secretary Ben Wallace denounced Putin as having broken his own promise not to mobilize his country for the conflict, saying that the conscription order is in effect an “admission that [Putin’s] invasion is failing.”

“He and his Defence Minister have sent tens of thousands of their own citizens to their deaths, ill equipped and badly led,” Wallace remarked. “No amount of threats and propaganda can hide the fact that Ukraine is winning this war.”

.Please let us know if you’re having issues with commenting.