Quid Pro Quo Was Proven By Their Own Words 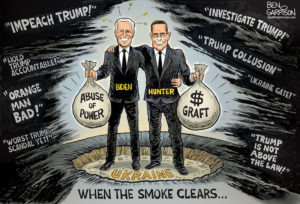 The White Hats have recordings of Biden discussing a quid pro quo of a billion dollars to fire the prosecutor who was investigating Hunter Biden. Denial has a way of coming back to haunt them. Everything Trump said is coming true, they have proof. Signatures on documents, recordings and videos, yet they say they knew nothing. They cannot have it both ways.

Democratic states are trying to stay locked down. In New Jersey, an owner of a gym opened their doors. Today, police have their marching orders and are standing outside and are harassing the gym members as they leave.  What are these cops doing? Didn’t they promise to uphold the law of the land, the US constitution and protect the rights of the people? Are they so afraid of losing their jobs they are violating their oaths?

These officers are threatening law-abiding citizens with a year in jail. If these citizens remain in jail for a year, or even 6 months, they will be ineligible to vote. Is this part of the agenda of the DS? Are the Dems willing to do anything to win, even breaking the law?

Criminals convicted of a crime are being released from prison because they might get covid-19. The tax-paying, law abiding citizen who has a business, who is a community supporter, who wants to feed their family, are being threatened  with jail-time for a year? Who are the real criminals, here?

They don’t want the country to open up. It will ruin their narrative. People are realizing their governor or their mayor is the tyrant. Trump is simply letting it play out. He wants the people to see their public servants in action.

Why do they get away with trampling over our rights? We the people are allowing it and have more power than we think. A governor can only govern as far as the people will let him.

The MSM is telling people if they take HCQ it will kill them. If this was the case, it would have been reported somewhere over the past 70 years, how deadly it is. As it stands, some of our military, international travelers, and others use it every day.  By the way, HCQ is already FDA approved for various ailments.

The media knowingly went along with the DS players and Trump and his administration will be going after them for all the lying they have done to the American people.

These masks don’t stop viruses from coming to you, they stop you from spitting on people. Fauci in the beginning told us not to wear them, that they were not necessary. So, why after the curve flattened and the country is beginning to open, is Fauci and the media wearing them now? They are pushing fear.

They are projecting their fear on the American people hoping to keep us under their control. The Dems are panicked. They fear the polls, they fear a public awakening, but Q says their tactics will end the day after election day. Remember these people do not love America nor you, nor I. They only want power.

Again, the Trump admin. wants you and I to see who the tyrants are. Are we paying attention?