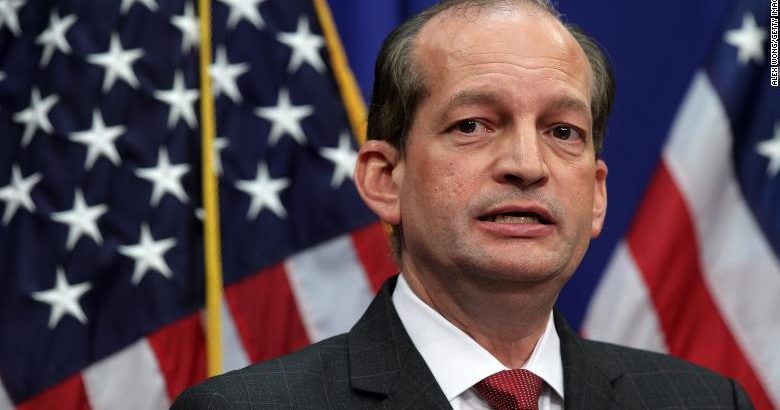 President Trump said Thursday evening that he will name Eugene Scalia, one of the sons of the late Justice Antonin Scalia, as labor secretary.

The president took to Twitter to announce “that it is my intention to nominate Gene Scalia as the new Secretary of Labor,” a post being vacated officially Friday by Alex Acosta.

“Gene has led a life of great success in the legal and labor field and is highly respected not only as a lawyer, but as a lawyer with great experience working with labor and everyone else. He will be a great member of an Administration that has done more in the first 2½ years than perhaps any Administration in history!” Mr. Trump wrote over two tweets.

I am pleased to announce that it is my intention to nominate Gene Scalia as the new Secretary of Labor. Gene has led a life of great success in the legal and labor field and is highly respected not only as a lawyer, but as a lawyer with great experience….

Free-market advocates cheered the choice of Mr. Scalia; the Senate’s top Democrat did not.

“He’s very pro-markets. I think he’d be fair to business and labor, and would be a great choice,” said conservative economist Steve Moore, an ally of the White House and a columnist at The Washington Times.

The New York Times reported the decision earlier in the evening, citing “two people with direct knowledge of the decision.”

According to one of The New York Times’ sources, Mr. Scalia was pushed for the job to Mr. Trump by Sen. Tom Cotton. The Arkansas Republican attended a White House meeting Thursday where Mr. Trump offered the post to Mr. Scalia, and he accepted.

Senate Minority Leader Charles E. Schumer, New York Democrat, chided the Trump White House for going with a labor lawyer — now a partner in the Washington office of Gibson, Dunn & Crutcher — rather than a union member, calling the move a betrayal of Mr. Trump’s blue-collar supporters.

“President Trump is missing an opportunity to nominate a fighter for workers, like a union member, to be America’s next Labor Secretary. Instead, President Trump has again chosen someone who has proven to put corporate interests over those of worker rights. Workers and union members who believed candidate Trump when he campaigned as pro-worker should feel betrayed,” he said.

Democratic opposition to Mr. Scalia goes back a way, though.

Mr. Scalia had been picked by President George W. Bush in 2001 to be the labor department’s solicitor, but the Democratic-controlled Senate refused to confirm him. He got the job later for a time under a recess appointment.

Unions and Democratic leaders then cited his criticism for what became known as the “ergonomics rule” on repetitive-stress injuries, which he had labeled “junk science” and thus became an “extremist.” But there was little doubt even then that the refusal to vote for him was significantly over Mr. Scalia’s last name.

“It’s hard to believe that on some level on both sides it’s not a very important factor that is just beneath the surface,” Democratic consultant Joe Trippi told the Chicago Tribune at the time.

With the Senate in Republican hands now, that will not be a factor.

From Friday, when Mr. Acosta formally leaves over his role in the Jeffrey Epstein case as a U.S. attorney, the acting secretary will be Mr. Acosta’s deputy, Patrick Pizzella, who also is seen as more congenial to free-market conservatives.

Mr. Acosta was distrusted as a moderate by some conservatives eager to rein in the power of unions, which they see as now little but a Democratic super PAC.