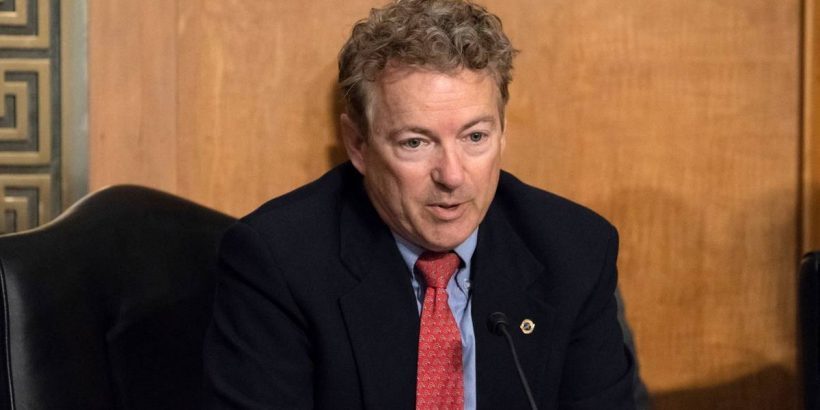 Sen. Rand Paul (R-Ky.) and 24 of his Republican colleagues in the Senate introduced a proposal Thursday that could become a huge obstacle for President Joe Biden’s ambitious re-regulatory plans.

The “Regulations from the Executive in Need of Scrutiny Act of 2021” (REIN) would require that any new regulation proposed by an executive branch department or agency must be approved by Congress if it is projected to cost $100 million or more to implement.

“Under the REINS Act, once major rules are drafted, they must then be affirmatively approved by both chambers of Congress and then signed by the President, satisfying the bicameralism and presentment requirements of the Constitution. Currently, regulations ultimately take effect unless Congress specifically disapproves,” according to a statement issued by Paul’s office, with comments by him and Sens. Mike Lee (R-Utah), Roger Marshall (R-Kan.), and Marsha Blackburn (R-Tenn.).

“For too long, an ever-growing federal bureaucracy has piled regulations and red tape on the backs of the American people without any approval by Americans’ elected representatives,” Paul said in the statement.

“By making Congress more accountable for the most costly and intrusive federal rules, the REINS Act would give Kentuckians and citizens throughout the country a greater voice in determining whether these major rules are in America’s best interests,” Paul added.

“Unelected bureaucrats in Washington have far too much unaccountable power over the American people. The REINS Act would give Congress the authority to reject any federal government regulation with costs over $100 million, thus giving Americans an important check on federal regulators,” Lee said in the statement.

“We’ve already seen this new administration is full steam ahead on enacting their radical agenda through executive action. The REINS Act is a common-sense piece of legislation that would ensure Congress has a say in any new major regulation that would have a significant economic effect of $100 million or more,” Marshall said in the statement.

“We must ensure that unaccountable and unelected regulators do not hamper our economy with burdensome regulations as we try to come back from the hardship caused by the outbreak of the coronavirus,” he continued.

“The rise of the administrative state cannot go unchecked. When agency rule makers bypass Congressional review, the agenda of unelected bureaucrats dominates over the interests of American businesses and workers,” Blackburn said in the statement.

“This legislation will ensure greater accountability for executive rulemaking at time when agencies are growing especially emboldened to flex their regulatory powers.” Blackburn said.

The Paul proposal follows Biden’s signing of an executive order on his first day in office that repealed President Donald Trump’s requirement that for every new regulation introduced by federal officials there must be two old ones repealed.

According to the Heritage Foundation, Trump’s approach saved taxpayers and consumers billions of dollars, and resulted in the most extensive deregulation of the U.S. economy since the 1980s and is credited as a major factor in sparking the economic boom that began in 2018 and was only short-circuited by the CCP Virus pandemic and lockdown.

Biden promised during the 2020 presidential campaign to expand many existing federal programs like Obamacare and to introduce multiple new programs such as a new federal commission to “advance environmental justice” and green jobs.

The new chief executive also signed a second Executive Order on his first day in office that, according to federal regulatory expert Clyde Wayne Crews of the Competitive Enterprise Institute (CEI), is likely to “do away with cost/benefit analysis by elevating unquantifiable aims as benefits … and deny costs of regulation altogether.”

Paul’s proposal faces tough sledding in Congress, which has Democratic majorities in both the Senate and House of Representatives. But the Senate is split 50-50, with ties broken by Vice-President Kamala Harris (D-Calif.).

In the lower chamber, where Speaker of the House Nancy Pelosi’s majority is barely more than single-figures, there are 21 Democrats who represent heavily Republican districts that were carried by Trump in the 2020 election. Paul’s proposal could be an attractive tool for those Democrats to appeal to Republican voters.