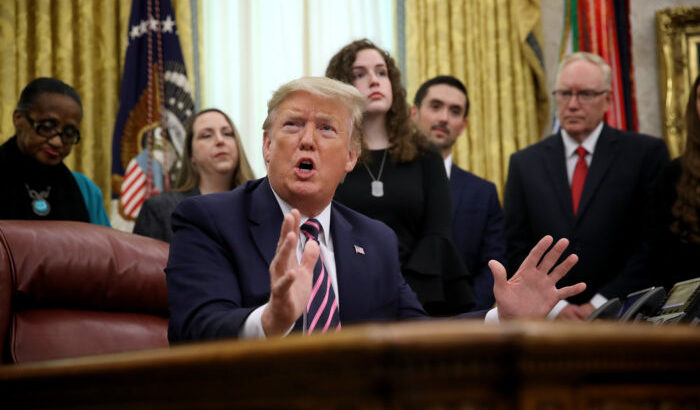 Trump Defenders: President Cannot Be Removed in Senate for Abuse of Power

With the Senate impeachment trial looming over the head of President Donald Trump, several of his defenders said he cannot be impeached for abuse of power.

Harvard Law professor Alan Dershowitz, a high-profile criminal attorney, told ABC News’ “This Week” Sunday that Supreme Court Justice Benjamin Curtis, in his defense of former President Andrew Johnson, argued that abuse of power doesn’t constitute an impeachable offense. Dershowitz confirmed Friday that he will join Trump’s legal team and will attempt to “defend the integrity of the Constitution.”

“So I am making an argument much like the argument made by the great Justice Curtis,” he said. “And to call them absurdist is to, you know, insult one of the greatest jurists in American history. The argument is a strong one. The Senate should hear it.” His “absurdist” reference was a response to House Intelligence Committee Chair Adam Schiff (D-Calif.), who said that to claim abuse of power isn’t impeachable is an “absurdist position.”

Curtis “argued, very successfully, winning the case, that you needed proof of an actual crime. It needn’t be a statutory crime, but it has to be criminal behavior, criminal in nature,” Dershowitz added. “And the allegations in the Johnson case were much akin to the allegations here … and that lost.”

In a separate interview on CNN Sunday, Dershowitz said that if his argument is successful, it would negate the need for any witnesses. Several Democratic and Republican senators have argued that witnesses should be called in the trial.

“No need for even arguments, any further arguments,” he said. “If the House charges do not include impeachable offenses, that’s really the end of the matter.”

“Even if everything that is alleged by the House managers is proven or taken as true, they would not rise to the level of an impeachable offense,” Dershowitz also argued.

Robert Ray, a former prosecutor who was added to Trump’s legal team, concurred with Dershowitz’s claim.

“Abuse of power alone, and history has shown this, similar to also obstruction of Congress, those types of articles of impeachment have been tried on for size before but they have not fared well,” he told Fox News’ “Sunday Morning Futures.”

“The core of the impeachment parameters allege that crimes have been committed—treason, bribery, and things like that—in other words, other high crimes and misdemeanors,” he added.

Senate Judiciary Committee Chairman Lindsay Graham (R-S.C.) didn’t argue that presidents could not be impeached for abuse of power, but he told Fox News on Sunday that House Democrats’ allegations have been “so poorly defined here I don’t know presidents in the future can conform their conduct.”

The claim from Dershowitz was attacked by Democrats on Sunday.

“This is preposterous that this would not be an impeachable offense, that this standard in America is now that presidents could abuse their power to help in elections,” Sen. Cory Booker (D-N.J.) told NBC News.