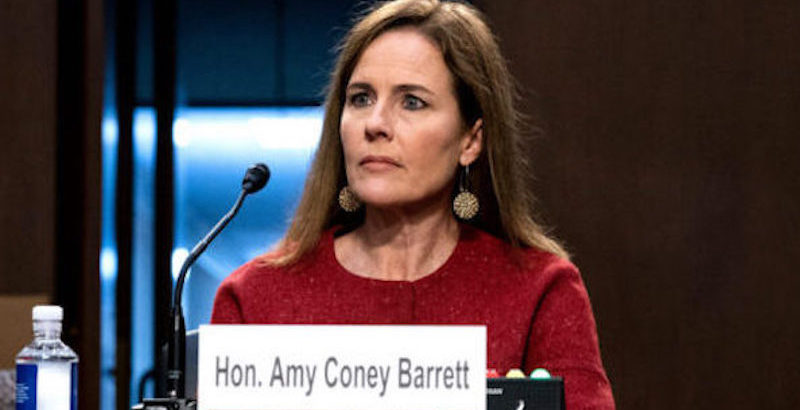 With the Senate Republicans having an edge on the majority, it looks as though we will have a new Supreme Court Justice by the end of the day.

Do you support President Trump’s selection of Amy Coney Barrett? With conservatives holding the majority in the Supreme Court, what would you like to see them accomplish during the next 4 years? Please comment below.

The Senate is poised to confirm Judge Amy Coney Barrett to the Supreme Court in what is expected to be a largely partisan vote on Monday, with no Democrats committed to voting in favor of President Donald Trump’s nominee.

Democrats have argued that the winner of the Nov. 3 presidential election should be the one to choose the nominee to fill the seat made vacant by the death of Ruth Bader Ginsberg.

The Senate, in a rare weekend session on Oct. 25, voted 51-48, largely along party lines, to limit debate on Barrett’s Supreme Court nomination, removing the possibility of a filibuster, and setting up a vote Monday.

Senate Majority Leader Mitch McConnell (R-Ky.) has rejected claims by critics that the judicial branch was becoming mired in partisan politics as he defended its transformation under his watch.

“This is something to be really proud of and feel good about,” the Republican leader said Sunday during the weekend session. “By tomorrow night, we’ll have a new member of the United States Supreme Court,” he added.

Barrett presented herself in public testimony before the Senate Judiciary Committee as a neutral arbiter of the law.

“She’s a conservative woman who embraces her faith. She’s unabashedly pro-life but she’s not going to apply ‘the law of Amy’ to all of us,” Judiciary Committee Chairman Sen. Lindsey Graham (R-S.C.) said on Fox News.

All Democrats are expected to vote against Barrett’s nomination, and on Oct. 25 Sens. Lisa Murkowski (R-Alaska) and Susan Collins (R-Maine) sided with Democrats in voting against limiting debate.

Collins has said she will vote against Barrett’s final confirmation, saying it’s too close to the Nov. 3 election. Murkowski has signaled she will vote to confirm Barrett, after initially expressing skepticism.

“I believe that the only way to put us back on the path of appropriate consideration of judicial nominees is to evaluate Judge Barrett as we would want to be judged—on the merits of her qualifications,” Murkowski said on the Senate floor on Oct. 24. “And we do that when that final question comes before us. And when it does, I will be a yes.”

Republicans only need 51 votes to confirm a new justice, meaning that with a 53-member majority, the GOP can afford to lose up to three Republicans, with Vice President Mike Pence able to cast the tie-breaking vote if a 50-50 split occurs. Pence’s vote isn’t expected to be required as Sen. Mitt Romney (R-Utah) has said on several occasions he would confirm Barrett.

Democrats have voiced opposition to Barrett’s confirmation because they believe she would imperil former President Barack Obama’s signature Affordable Care Act, known as Obamacare, when the Supreme Court convenes to take up a challenge to the landmark health care law in mid-November.

They have also accused Republicans of hypocrisy for moving to confirm a justice so close to an election, saying that when Justice Antonin Scalia died in 2016, the GOP-controlled Senate refused to vote on Obama’s choice, Judge Merrick Garland, to replace him.

McConnell has made a distinction between the two scenarios, however, saying that during Obama’s nomination there was a divided government, when the Senate and the presidency were held by different parties. Republicans currently hold both.

During his term in office, Trump has successfully nominated two other Supreme Court justices, Brett Kavanaugh and Neil Gorsuch. If Barrett is confirmed, it would give conservatives a 6-3 majority in the top court.

Barrett was a professor at Notre Dame Law School when she was tapped by Trump in 2017 for an appeals court opening, with two Democrats joining Republicans to confirm her at the time.