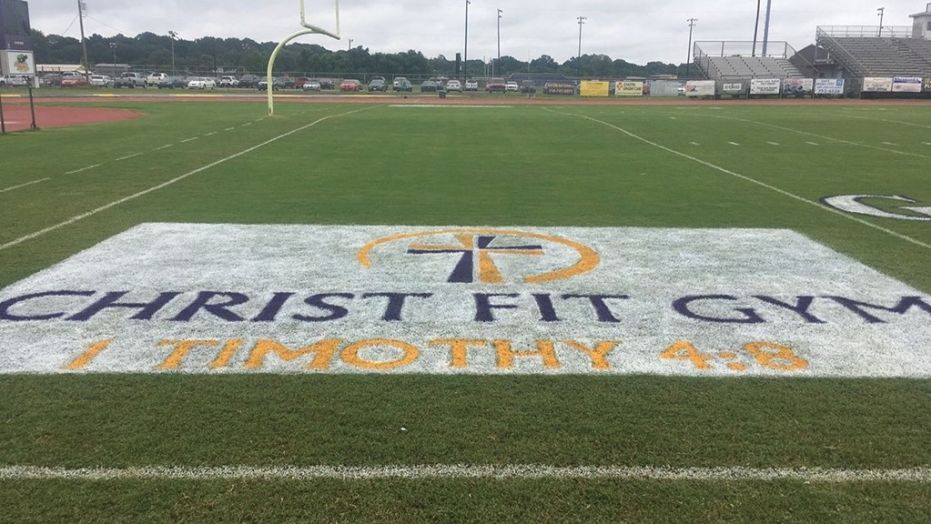 Two Benton High School students were ordered to remove a logo from the football field end zones because it included Christian references.

The order came just hours before the Louisiana high school football team ran onto the field.

“You have to stand up for Christ no matter what (and we) just told the coaches we wouldn’t do it,” one of the students wrote on social media. “We ended up leaving the field and not helping them cover up the Scripture that was put on the field.”

The logo belonged to Christ Fit Gym, a faith-based gymnasium in nearby Bossier City, Louisiana. It included the words “Christ Fit Gym,” a cross and a Bible verse reference, 1 Timothy 4:8.

Owner Billy Weatherall tells me he paid the high school football booster club $3,500 to put his logo in the end zone for the 2018-19 football season.

“We have a signed contract,” he told the Todd Starnes Radio Show.

“I got a phone call from a school official Friday morning while I was having my quiet time and drinking coffee,” Weatherall said. “He said they were instructed to paint over the cross and he was devastated about it.”

After he hung up the telephone and talked to his wife, Weatherall knew that he was going to have to take a stand.

A judge granted a temporary restraining order to prevent anyone from removing the signs — but it was too late.

Republican State Sen. Ryan Gatti, who is representing Christ Fit Gym, said he did not think he would see the day in Louisiana when teenagers would be asked to violate their conscience.

“We’re at the point now where kids are being asked to spray paint over signs with the name of Christ,” he told me. “Just let that sink in.”

The Bossier Parish School Board’s legal counsel advised the high school’s administration that the logo should be removed, pending consultation with the court.

“The logo of the business included a Cross and Bible verse and was painted on the football field yesterday,” the statement read. “A challenge to the logo was received from counsel for the plaintiffs in a pending federal lawsuit alleging improper endorsement of religion in the schools.”

Americans United for Separation of Church and State filed a federal lawsuit against the school district in February, alleging the district was promoting Christianity and proselytizing students.

Bossier Press reports the lawsuit alleges “widespread use of prayer on school property, during school events, in classrooms at all levels, at sporting events at graduation ceremonies, during awards assemblies, and at student government meetings.”

It’s not exactly clear what kind of godless heathen complained about the gymnasium’s logo — but I’m not sure they have a legal leg to stand on. But it doesn’t matter because they picked a fight with the wrong Christian.

Weatherall tells the Todd Starnes Radio Show that he plans on fighting the good fight to have his logo restored.

There are some mighty good people in Bossier City — and among them are Billy Weatherall and those two brave young teenage boys who stood up to those school officials.

“No matter what people say, you have to stand up for Christ even if it could get you in trouble with the school, or anyone else,” the young man wrote.

Todd Starnes is host of Fox News & Commentary. His latest book is “The Deplorables’ Guide to Making America Great Again.” Follow him on Twitter @ToddStarnes and find him on Facebook.

This article was vetted by our C-VINE team of volunteer investigative, citizen journalists who make certain all information is researched for accuracy before publishing. C-VINE News is run by, “We the People”.