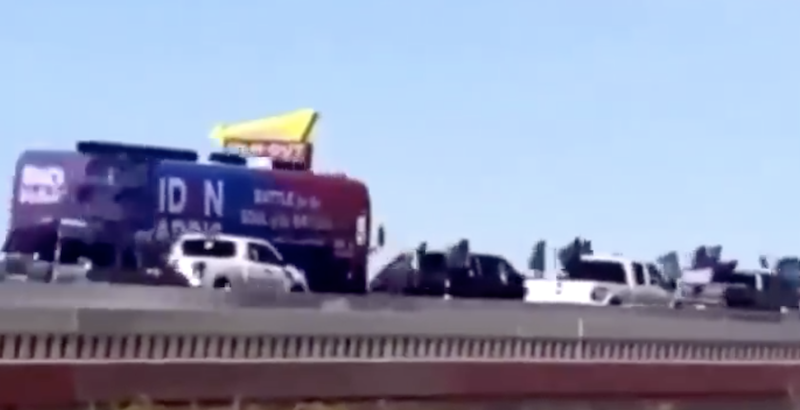 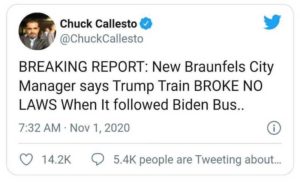 Biden appears to have more Trump supporters at his rallies than Biden supporters!  Was this Texas Trump ‘Train’ making sure Biden’s bus arrived safely?  He should thank them, but instead he cancels these events. His staff says they put him in harm’s way.  Another staff member called 9-1-1.

The city manager of New Braunfel later said no laws were broken by this Trump Train.  (<click for video).  People cannot be cited for simply driving down the road.

If Biden is afraid of Trump supporters, how can he possibly stand up to foreign enemies? Definitely worth noting.

Do you think this Trump Train put Biden in harm’s way? 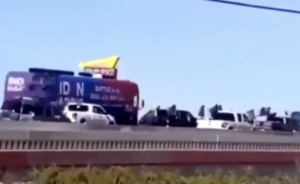 Democratic nominee Joe Biden’s campaign confirmed Saturday that it would cancel several events in Texas after drivers with pro-President Donald Trump flags and stickers appeared to follow and surround a Biden campaign bus.

“Rather than engage in productive conversation about the drastically different visions that Joe Biden and Donald Trump have for our country, Trump supporters in Texas today instead decided to put our staff, surrogates, supporters, and others in harm’s way,” Biden campaign Texas communications director Tariq Thowfeek told news outlets, confirming several events would be canceled in the state.

“Our supporters will continue to organize their communities for Joe Biden, Kamala Harris and Democrats up and down the ballot, and to the Texans who disrupted our events today: We’ll see you on November 3rd,” Thowfeek said. The campaign also told other news outlets that the events were canceled out of an abundance of caution.

Trump posted one clip of the incident along with praise on Twitter: “I LOVE TEXAS!”

West added: “Three Trump supporters have been executed, one in Portland, one in Denver, and one Milwaukee. A leftist mob attempted to storm the house of the McCloskeys, threatened to burn their house down, rape Mrs. McCloskey, and then kill them both.”

“Where is the liberal corporate media’s concern about that real violence? Additionally, none of what your question implies is accurate. It is more fake news and propaganda,” he said in a statement, adding: “Prepare to lose…stop bothering me. Maybe Soros can cut y’all another check in 2022,” referring to leftist billionaire donor George Soros.

Rep. Sheryl Cole, a Democrat in Texas’s House, said a Biden event in her area was canceled over the incident.

“This is a 1st for me – but we just cancelled a joint event in Pflugerville w/ @JoeBiden campaign,” she wrote.

Eric Cervini, a volunteer for the Biden campaign, wrote on Twitter that he “flew down to Texas to help the Biden/Harris bus,” adding that it was “intended to drum up enthusiasm at polling locations.” He added: “Instead, I ended up spending the afternoon calling 911.”

According to a Twitter post, one apparent Trump supporter wrote of the impromptu event: “Join us in #SanAntonio to escort the Biden bus coming through San Antonio … We are on the bridges & will intercept at Walters/I35!!”

Cervini added to the Texas Tribune that about 40 to 50 vehicles partook, saying the trucks had American flags and Trump flags.

Trump, during an event in Pennsylvania on Saturday, told a crowd: “Anybody see the picture of their crazy bus driving down the highway, they are surrounded by hundreds of cars, they are all Trump flags all over the place.”