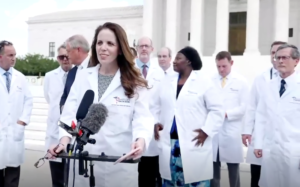 Doctors [<click link for video] set up a summit and are calling out other doctors, pharmaceuticals, hospitals and the CDC who are giving a false report around COVID. Death rates, false positives, unnecessary mandatory testing, will be exposed and will be countered. People are asking questions!

Who decided this was a pandemic? The numbers are not showing consistency. Why did the mainstream media tell everyone Hydroxycloroquine was deadly. It’s not! It actually saves lives.

Why did governors block the distribution of HCQ? They don’t have a license to practice medicine so why do they get to decided which medication a patient can or can’t have? Shouldn’t that be doctor-patient privilege?

Class action lawsuits are going to explode between mask infections and wrongful deaths, job losses and bankruptcies. Doctors, hospitals, and even Dr. Fauci was involved in all of this corruption. Will they be the brunt of class action suits? They should all be investigated! 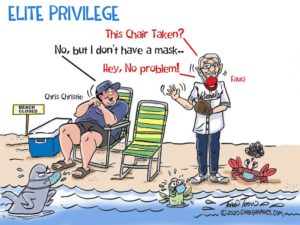 The Association of Medical Doctors and Surgeons have done studies saying masks do not work. Social distancing is not necessary. The immune compromised person needs to take precautions but the everyday person does not. The truth is about to come out. The truth is… we’ve been severely lied to. Yes, COVID is real, but the pandemic is not!

On July 12, 2018, Mueller’s team dispatched and manipulated a letter to the FISA Court informing the FEDS that the FISA application had not expired. 9 days later, the application for Carter Page was released to fill the FOIA Act request. But in truth, they illegally changed dates and were caught. Now, they are in a panic.

Lindsay Graham is saying he has some notes that he will release very soon. These will show the FBI misled lawmakers. Those are said to be released next week. Not only did the FBI lie to the Court, but they lied to Congress; two crimes. This is why they are panicking. It’s all crashing down around them!

Matt Gaetz filed a criminal referral against Facebook and Twitter. Mark Zuckerberg told congress and the world they were not shadow-banning, not censoring anyone. Many of us reading this article know this is absolutely not true due to personal experience. Many of us have been shadow-banned, posts removed or even accounts closed. Bill Barr is working on an investigation into social media censorship. 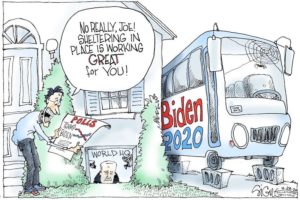 It appears Biden is ‘hidin’,’ avoiding interviews with news agencies. Fox requested an interview with Biden but his campaign staff declined. He won’t be able to put it off too much longer. Will he say he is too ill, then bring in the person from the shadows? Who will it be?

In Portland, Federal Agents came out in 4 teams, fairly well spaced apart. ANTIFA did not like this for they could not fight the Feds. After a while, ANTIFA began surrounding the agents, so the FEDS used tear-gas which drew them back.  Then, they allowed the leaders of ANTIFA to get close enough and just at the right time, the FEDS grabbed ANTIFA and arrest their leaders.

With ANTIFA separated from their own leadership, they didn’t know what to do next. These FEDS are cleaning up the streets! This was a calculated plan because the FEDS have been tracking ANTIFA and their leaders for years. 236 arrests! Great job!

President Trump mentioned that our children are being indoctrinated in our schools. What did he mean? Senator Tom Cotton, introduced a bill which would ban federal funding to schools who are teaching that America was founded on slavery. What?

An activist movement is being taught to American children stating America was founded on slavery rather than on the ideals of our declaration. This distortion is being taught to children in public school classrooms via the New York Times 1619 Project. This is highly racially divisive and is left-wing garbage! Rewriting history is not acceptable! Tom Cotton is bringing awareness to this travesty!

Our Founding Fathers wrote that everyone was created equal under the law, our law! Racial division is being fanned by the Deep State, the media and those DS puppets. Sure, there are some pockets of racism but most Americans do not embrace it. The media would like us to think it’s a bigger deal than it is, but the idea of racism is grossly exaggerated.

Americans just want to make a living, support their family and live in freedom and happiness for the rest of their lives without an enemy scaring them. Those in power, want us to remain in fear and be divided.

If the people come together, everyone will be able to see who the real enemies are… namely, the media. They are the ones who have been feeding the people lies. Social media has been responsible to remove Patriots accounts from the internet because they don’t like what they post. Not that it’s incorrect info, but because it doesn’t fit their narrative. Their censorship is biased. Do you see who the enemy is? 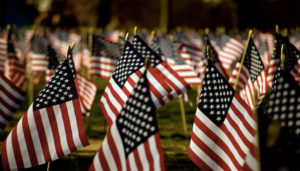 Hundreds and hundreds are posting photos of American flags. What a wonderful sight to behold! Our flags represent Patriots, the Majority! Those who are against this country are the minority. The Majority has spoken and are silent no more! Flags out, Patriots! Flags out!