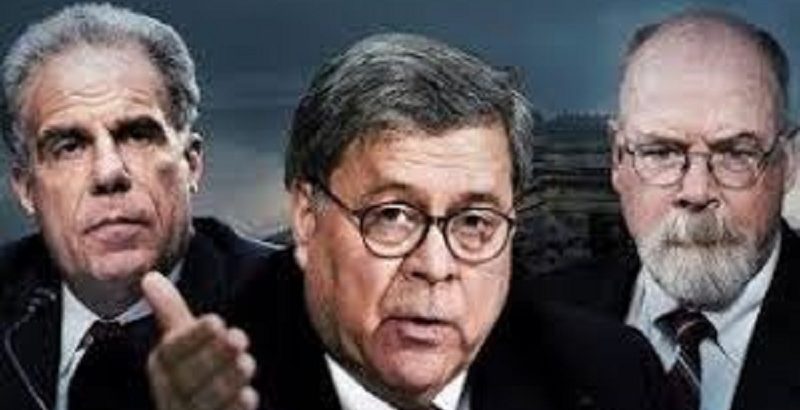 Now that the IG report on FISA abuses had been released, now what? Some are regurgitating the Main Stream Media talking points, that the Deep State corrupt FBI and DOJ players did nothing wrong. Some are expressing their dismay that there were no indictments.

Let me first start out by saying, as I did before the IG report came out, that DOJ Inspector General Horowitz is not a criminal prosecutor and does not have prosecutorial authority such as convening a grand jury or file criminal charges.  The IG is authorized to exercise administrative subpoena authority to obtain information required for administrative, civil and in some cases criminal investigation if it is tied to the initial administrative or civil investigation within the DOJ.

IG Horowitz is an in-house internal affairs investigator for the DOJ and FBI. The IG can only recommend prosecution. I warned that those looking for the IG to indict would be greatly disappointed.

Attorney General Barr and United States Attorneys John Durham and John Huber, on the other hand are prosecutors They can convene a grad jury and can file criminal charges. The MSM, including Fox News reported that Horowitz found no bias in launch of Trump-Russia probe or that he didn’t find evidence to support the claims that the spying against the campaign was motivated by political bias, according to Horowitz’ report. I say so what! It is his opinion. He will not be the one prosecuting the corrupt deep state players.

Some can argue the IG report supports the MSM talking points. GOOD! Let’s think logically for a moment. By being neutral or even favorable to the deep state, doesn’t that give the White Hats the opportunity to put out press releases, refuting the IG and making the White Hats’ case? Doesn’t the report create a buzz within the “normies” population? Doesn’t the buzz create an awareness of the corruption and ultimately awaken the masses to the corruption that has been going on?

Did you read the press releases from Barr and Durham in response to the IG report?

Barr had previously assigned U.S. Attorney Durham to review origins of Russia inquiry so Durham and Horowitz were conducting concurrent (at the same time) investigations. Durham had undoubtedly convened a grand jury. The difference is Durham has the prosecutorial authority and can issue criminal subpoenas to deep state FBI and DOJ players who were fired or no longer work for the FBI or DOJ. Horowitz could not.

“We advised the Inspector General that we do not agree with some of the report’s conclusions as to predication and how the FBI case was opened,” Durham said in a statement.

“I have the utmost respect for the mission of the Office of Inspector General and the comprehensive work that went into the report prepared by Mr. Horowitz and his staff. However, our investigation is not limited to developing information from within component parts of the Justice Department. Our investigation has included developing information from other persons and entities, both in the U.S. and outside of the U.S. Based on the evidence collected to date, and while our investigation is ongoing, last month we advised the Inspector General that we do not agree with some of the report’s conclusions as to predication and how the FBI case was opened.”

This is what Q had to say”

“DECLAS OF FISA WILL INITIATE THE ‘AWARENESS’ THAT ALL SIGNERS WILL BE [CURRENTLY] UNDER INVESTIGATION.

DECLAS OF FISA WILL FACTUALLY DEMONSTRATE WITHOUT ARGUMENT THE US GOVERNMENT, UNDER HUSSEIN, KNOWINGLY, PRESENTED FALSE EVIDENCE TO FISC IN AN EFFORT TO OBTAIN ‘LEGAL’ US INTELLIGENCE ‘UMBRELLA’ SURV OF POTUS [IDEN TARGET] FOR THE SOLE PURPOSE OF INFLUENCING THE 2016 ELECTION OF THE PRESIDENCY [NOT RUSSIA BUT HUSSEIN/HRC – PROJECTION] + SAFEGUARD AGAINST POSSIBLE LOSS OF POWER [FIREWALLS].

This movement is The Great Awakening and part of The Plan is to awaken the sleeping masses. This report is but one avenue to that goal.

It is my contention that IG Horowitz is a White Hat and had purposefully written his report the way he did for the good of mankind! He took one for the team!

IG Horowitz is scheduled to appear before the Senate Judiciary Committee on June 11th. Had Horowitz written the report favorably to the White Hats, the Republican Senators on the committee would be expending their time defending the IG report. The way the IG report is written the Republican senators can now cross examine the IG and ask him questions that will “DEMONSTRATE WITHOUT ARGUMENT THE US GOVERNMENT, UNDER HUSSEIN, KNOWINGLY, PRESENTED FALSE EVIDENCE TO FISC IN AN EFFORT TO OBTAIN ‘LEGAL’ US INTELLIGENCE ‘UMBRELLA’ SURV OF POTUS [IDEN TARGET] FOR THE SOLE PURPOSE OF INFLUENCING THE 2016 ELECTION OF THE PRESIDENCY”.

It was planned all along! It’s about OPTICS! The upcoming hearing is intended to awaken the sleeping masses in a “non-offensive” manner that would otherwise turn them off to the process. It makes for a great show!