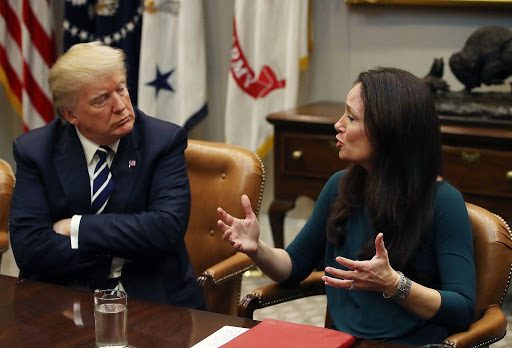 “The America first Policy Institute is launching to continue the transformative changes that happened over the last four years,” AFPI President and CEO Brooke Rollins said in a video released Tuesday.

Rollins was the director of the Domestic Policy Council in the Trump Administration. Before that, she ran the White House Office of American Innovation.

“The Trump Administration’s policy agenda created the greatest economy of our lifetimes,”  Rollins continued in a statement. “We’re going to innovate and advocate for policies to put the American people first. This means securing our Nation’s border, reviving American industry, reasserting American primacy, and most of all, restoring American optimism.”

AFPI stated on its website that it would advance policies to secure borders, advance merit-based immigration policies, and safeguard election integrity.

AFPI also indicated that it would pursue a hardline China policy, saying it will research and develop “policies that study how decades of America’s accommodation of Communist China has nurtured an existential rival to our Nation and our livelihood as we know it.”

AFPI is allegedly the largest pro-Trump outside group with a first-year budget of $20 million, Axios first reported.

AFPI’s Chief Communications Officer Rachael Slobodien confirmed to The Epoch Times that Ivanka Trump and Jared Kushner are the informal advisers to the nonprofit.

Trump applauded the launch of AFPI.

“The patriots assembling the America First Policy Institute (AFPI) are some of the greatest champions for freedom, free enterprise, national greatness, and the primacy of American workers, families, and communities, that our Nation has ever seen,” Trump said in a statement. “Linda McMahon, Brooke Rollins, Larry Kudlow, Rick Perry, General Kellogg, and the rest of the freedom warriors at AFPI have my full support as they work not only to preserve the historic accomplishments of my Administration but also to propel the America First Agenda into the future. I look forward to working with them to save America.”

Linda McMahon, the Administrator of the Small Business Administration during the Trump administration, serves as Chair of the AFPI board. McMahon was also one of the top donors to the Trump 2020 campaign.

“We will not stop working until the government truly serves the people first,” McMahon said in the statement.

Trump’s economic advisor Larry Kudlow serves as vice-chair of the board.

Trump’s Secretary of Energy Rick Perry serves as chairman of the Center for Energy Independence.

AFPI said its work would be divided by 20 policy centers led by 40 of the most qualified servant leaders from the Trump Administration and the conservative movement.