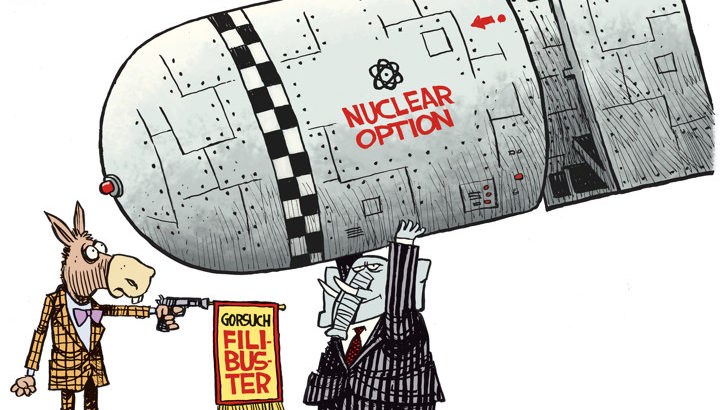 President Trump on Friday publicly urged Senate Majority Leader Mitch McConnell to deploy the so-called “nuclear option” to jam through a controversial spending package that includes billions in border-wall funds, as Washington’s warring parties remain on a collision course toward a partial government shutdown at midnight.

“Mitch, use the Nuclear Option and get it done! Our Country is counting on you!” the president tweeted, referring to congressional slang for overhauling the Senate filibuster so legislation can pass with just 51 votes, as opposed to the usual 60.

The president prodded McConnell to shatter Senate precedent after the House approved $5.7 billion for a border wall as part of a measure to fund the government through early February. Trump hailed the 217-185 vote as a big victory – one that GOP leaders scrambled to cobble together when the president abruptly backed off tacit support for an earlier Senate-approved stopgap that did not include the wall money.

With a 60-vote threshold, however, the House-passed package stands little chance of being endorsed on the Senate side.

Trump backed the “nuclear option” after Sen. Steve Daines, R-Mont., and others called for it.

“House just passed a bill that fully funds government and enables @realDonaldTrump to secure our border/build the wall. Senate can do same by eliminating the filibuster. 51 votes, same as we do for judges!” Daines tweeted. Trump afterward said Daines has his “total support” in that effort.

McConnell, however, repeatedly has said he would not go this route on legislation. Such a drastic change would likely struggle to pick up enough support even among Senate Republicans, though the chamber has been steadily eroding filibuster precedent to ease the path for the confirmation of presidential nominees dating back to the Obama administration.

“They should [lower the threshold”. This is such an important issue and it’s something that all of America wants to see happen,” she said, calling for the Senate to do “whatever is necessary to get the job done.”

The end-game remains unclear. Just two days ago, Trump seemed resigned to backing a stopgap spending package without his sought-after wall money, for the sake of avoiding a partial shutdown after Friday’s midnight deadline. But after a backlash from conservatives worried the president’s wall promise would effectively crumble once Democrats take the House next month, Trump reversed course to insist on the funding — resulting in Thursday’s House vote.

Yet Senate Democrats are in no mood to go along with the House Republican package.

“The Trump temper tantrum may produce a government shutdown. It will not get him his wall,” Senate Minority Leader Chuck Schumer, D-N.Y., said.

Absent a sudden compromise or an even more unlikely filibuster change, funding for nine of 15 Cabinet-level departments and dozens of agencies could lapse at midnight, resulting in a partial shutdown just as the Christmas break begins.

Both sides were busy assigning blaming Friday morning, in anticipation of that scenario. While Schumer and House Minority Leader Nancy Pelosi have already branded this outcome a Trump shutdown, the president tweeted Friday that “it will be a Democrat Shutdown!” if they don’t support the measure before them in the Senate.

“No matter what happens today in the Senate, Republican House Members should be very proud of themselves. They flew back to Washington from all parts of the World in order to vote for Border Security and the Wall. Not one Democrat voted yes, and we won big. I am very proud of you!” he tweeted. “The Democrats, whose votes we need in the Senate, will probably vote against Border Security and the Wall even though they know it is DESPERATELY NEEDED. If the Dems vote no, there will be a shutdown that will last for a very long time. People don’t want Open Borders and Crime!”