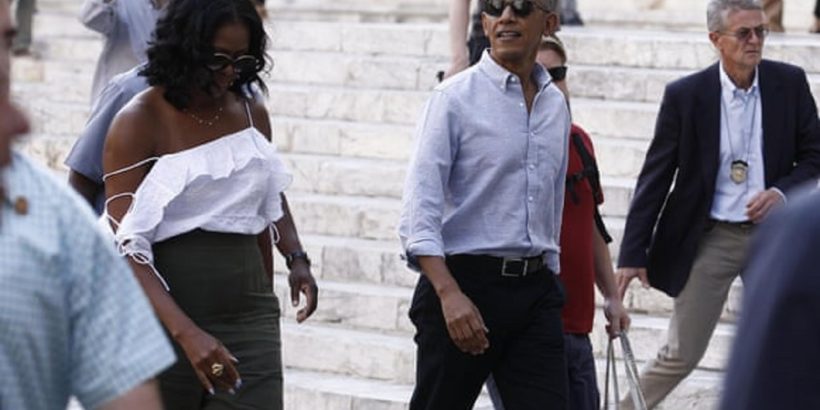 This article is from The Guardian and was written more than 3 years ago.

Coinciding visits, although unintentional, serve to highlight Europe’s radically different view of the incumbent president and his ‘painfully missed’ predecessornald Trump makes his European debut as US president this week just as his predecessor, Barack Obama, returns to the continent for his first visit since relinquishing the White House in January.

While apparently unintentional, the coinciding visits serve to highlight Europe’s radically different view of the two men. A Pew Research Center survey last June found 77% of Europeans had confidence in Obama – and 9% in the man who has now succeeded him.

The contrast will come into sharp focus on Thursday, when the current and former presidents have parallel public engagements in Europe, providing a split-screen comparison between their extreme differences.

Trump, on his inaugural foreign tour, which has also taken in stops in Saudi Arabia and Israel, has a lunch date with the newly elected French president, Emmanuel Macron, in Brussels. He’s also got meetings and a dinner with EU and Nato leaders.

Obama will deliver a speech alongside German chancellor Angela Merkel at Berlin’s Brandenburg Gate. The Obama Foundation says the invitation from Merkel came before the US election, so the fact that he is in Europe as the same time as Trump is pure coincidence.

Europeans are already wistful in anticipation. Pictures of Obama on holiday in Tuscany with his wife, Michelle – relaxed and smiling in an open-buttoned shirt – have only heightened the sense of longing for a president whose rationality, sophistication and emotional intelligence often contrast with his successor.

Regarding Obama’s Berlin visit, the highpoint of a season of celebrations to mark the 500th anniversary of the Protestant church, the Leipziger Zeitung wrote that his presence in Germany would be like that of a “healer”.

“Already he is a painfully missed ex-president,” the newspaper wrote in an editorial, describing him as an “eloquent, charismatic preacher” – qualities it suggested were sorely lacking in Trump.

Obama and Trump have not met or spoken since the inauguration, and that seems unlikely to change, especially since Trump repeatedly accused his predecessor –without any evidence – of having him bugged during the campaign.

Obama has stayed on in Washington while his youngest daughter, Sasha, finishes high school and he raises funds for a presidential library and museum on the South Side of Chicago. The Obama Foundation has ambitions to promote civil society in the US and around the world, combat climate change, narrow inequality, and pursue conflict resolution. 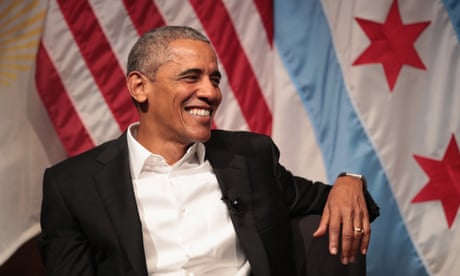 Barack Obama steps back into public spotlight: ‘So what’s been going on?’

Meanwhile, Obama has also spent a lot of his time since leaving office on an array of luxury island and seaside resorts, posting sunny and smiley images of himself having fun with the global jet-set – somewhat to the irritation of many of his supporters left despairing in Trump’s America.

At the 18th-century arch in Berlin that has also heard celebrated speeches from Ronald Reagan and Bill Clinton, Obama and Merkel will take questions about shaping democracy from a teacher, an actor, a social worker and a student.

In 2008, 200,000 Berliners came to hear Obama – then campaigning for the presidency, and barred by Merkel from speaking at the Brandenburg Gate – tell them: “This city, of all cities, knows the dream of freedom.”

Eight years later, he addressed an invited audience of 6,000 on his final trip to Europe as president, and told the chancellor – whom he described during his term as “my closest international partner” – that she was “on the right side of history”.

Obama and Merkel ended up forging a genuinely close bond during his presidency, finding common ground over issues such as Russia’s annexation of the Crimea, the European financial crisis and the refugee crisis.

While they differed notably on how to tackle the Islamic State, the former US president also developed a close working relationship with France’s ex-president François Hollande, particularly in the wake of the 2015 Paris terror attacks.

Obama told Hollande after the attacks that Americans “love France for your spirit and your culture and your joie de vivre … When tragedy struck, our hearts broke, too. In the face of the French people, we see ourselves. Nous sommes tous Français (We are all French).”

The German chancellor’s meeting with the new US president at the White House in March was notable for its awkwardness, with Trump appearing to refuse to shake Merkel’s hand and the two failing to disguise deep differences in policy and style.

But Trump – who is expected in Germany for the first time as president in July, when he visits a G7 summit in Hamburg – and Obama both come to Europe with the continent in a more optimistic mood than it has been for many months.

Fallout from Europe’s migration crisis, bloody terror attacks in France, Belgium and Germany, persistent economic woes and the shock of Britain’s vote to leave the EU – not to mention Trump’s election – had left the bloc shaken and fearful.

The prospect of the same populist, nationalist forces that led to Brexit and Trump sweeping to victory in elections in Austria, the Netherlands and France prompted real concern for the EU’s future.

European fears were further deepened by Trump’s apparent fondness for Russia’s Vladimir Putin, and his suggestion that the US might no longer give unconditional support for Nato – the security umbrella that for 60 years has made EU stability and prosperity possible.

But the political risk seems, for the time being, to have been been averted, most significantly in France. After a decisive victory over Marine Le Pen in the French election, Macron quickly established a rapport with Merkel – who herself looks increasingly likely to win re-election this autumn.

It will welcome Obama – who after Berlin visits Edinburgh to address philanthropy and business leaders – with nostalgic warmth.

Trump’s erratic and at times aggressive stance on the EU and Nato remains a major source of concern in EU capitals – as does the worry that the US president may be tempted to act tough abroad to compensate for his domestic problems.

Europe has set a low bar for what will constitute a successful day with the highly unpredictable president. But understandable pre-visit nerves may be at least tempered by the feeling that the bloc is better placed to assert its significance as a transatlantic partner than it has been for some time.