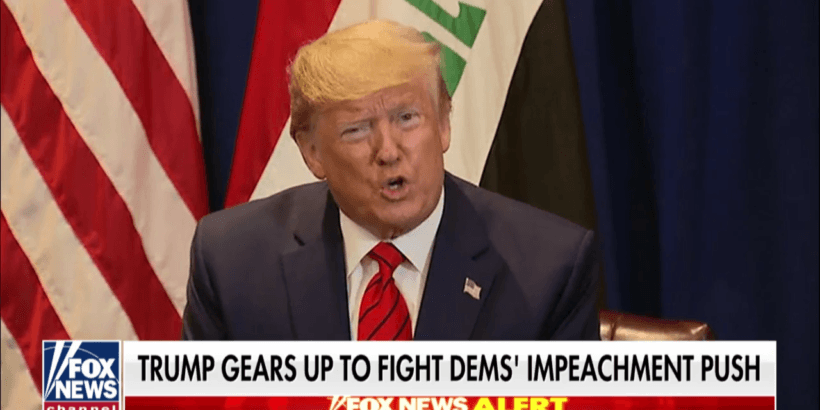 READ THE DECLASSIFIED UN-REDACTED TRANSCRIPT OF TRUMP’S CONVERSATION WITH UKRAINIAN PRESIDENT BELOW:

Is this another nothing burger?   Who are we to believe – the Democrats’ call for impeachment, or the actual recorded phone call?

The Dems know it’s take down Trump before he takes them down, but they seem to be doing a nice internal demolition job on their own.  They’re destroying their own house.

Ukraine call transcript shows Trump sought Biden probe, asked about DNC server – but made no mention of US aid

VIDEO:  Trump goes on the offense against impeachment inquiry

The White House on Wednesday released a transcript of President Trump’s July phone call with Ukrainian President Volodymyr Zelensky showing him seeking a review of Biden family dealings in the country – but the document does not show Trump explicitly leveraging military aid as part of a quid-pro-quo, as Democrats have suggested in pressing forward with impeachment.

The document, declassified by Trump a day earlier, indicates the call – which Trump made from the White House residence — took place July 25 from 9:03 a.m. to 9:33 a.m. A notation on the memo says it does not represent a “verbatim transcript” but is based on “notes and recollections” of those listening and memorializing the call. It is still presented in transcript form.

The memo begins with the president congratulating Zelensky on his election victory, before Trump eventually broaches the subject former Vice President Joe Biden and his son Hunter.

That refers to Joe Biden, while vice president, urging Ukraine to fire its top prosecutor, Viktor Shokin, while Shokin was investigating the natural gas firm Burisma Holdings — where Hunter Biden was on the board. Biden has maintained that corruption concerns prompted his intervention.

Trump, in the run-up to the transcript’s release, was accused by Democrats of essentially pressuring a foreign power to investigate a political opponent, as Biden is now a top contender for the 2020 Democratic presidential nomination.

On Monday, it was reported that Trump had even ordered his staff to freeze nearly $400 million in aid to Ukraine a few days before the phone call with Zelensky, a detail that fueled impeachment calls leading to House Speaker Nancy Pelosi announcing a formal impeachment inquiry Tuesday. But the call transcript does not include any mention of the aid, as a bargaining chip or otherwise.

In fact, it shows Zelensky telling Trump: “I would also like to thank you for your great support in the area of defense.”

The transcript shows Zelensky suggesting to Trump the Biden matter would be looked into by a new prosecutor. “He or she will look into the situation specifically to the company that you mentioned in this issue, the issue of the investigation of the case is actually the issue to restore the honesty so we will take care of that and we will work on the investigation of the case.”

The president told Zelensky he wanted his lawyer, Rudy Giuliani, and Attorney General Bill Barr to get involved.

“I will have Mr. Giuliani give you call and I’m also going to have Attorney General Barr call and we will get to the bottom if it. I’m sure you will figure it out,” he said.

Before the transcript was released, Democrats accused Trump of improperly using his office to pressure another country to investigate one of his chief Democratic rivals. Hogan Gidley, a White House spokesman, said during an appearance on Fox News: “There was no pressure. There was no quid pro quo.”

Trump has denied wrongdoing and has repeatedly referred to the impeachment push as a partisan “witchhunt.”

“Will the Democrats apologize after seeing what was said on the call with the Ukrainian President? They should, a perfect call – got them by surprise!” the president tweeted Wednesday.

“Will the Democrats apologize after seeing what was said on the call with the Ukrainian President? They should, a perfect call – got them by surprise!”

The Trump-Zelensky conversation led to a whistleblower complaint against the president, provoking an avalanche of impeachment calls from Democrats.

But the Justice Department – in a new letter from the Office of Legal Counsel obtained by Fox News — is pushing back on the claim that the whistleblower brought out something of “urgent concern” that would have to be turned over to Congress.

“For the reasons set forth above, we conclude that the complaint submitted to the ICIG does not involve an ‘urgent concern’…”  It adds: “As a result, the statute does not require that the DNI transmit the complaint to the intelligence committees.”

The DOJ opinion also said the intelligence community inspector general found “some indicia of an arguable political bias on the part of the complainant in favor of a rival political candidate,” but still said the allegations “appeared credible.” Fox News previously reported that, according to a source, the individual also did not have “firsthand knowledge” of the phone call.

On Tuesday night, Pelosi – who had resisted calls from the liberal base to pursue articles of impeachment — announced a formal impeachment inquiry against the president. Even without a “quid pro quo” illustrated in the transcript, Democrats are likely to move full speed ahead on impeachment. Wednesday’s transcript release is the first time lawmakers have seen exactly what was said in the conversation.

Democrats, though, have said they won’t be satisfied with just seeing the transcript and have said they want access to the full whistleblower report. That complaint may soon be turned over, however, as the administration weighs how to handle the document.

The transcript also shows Trump asking for a “favor” in the form of Ukraine providing information about the hacking of the DNC server in 2016.

“I would like you to do us a favor though because our country has been through a lot and Ukraine knows a lot about it. I would like you to find out what happened with this whole situation with Ukraine, they say Crowdstrike… I guess you have one of your wealthy people… The server, they say Ukraine has it,” Trump said.

Later, Trump is slated to meet with Zelensky, in what will be a high-stakes moment amid the impeachment push, on the sidelines of the United Nations General Assembly in New York. The meeting was previously scheduled, unrelated to the whistleblower allegation, though the two leaders are expected to receive questions from reporters on the matter.

Trump then is expected to hold a press conference in New York in the late afternoon, where the impeachment drive is sure to be front and center.

A senior Trump administration official told Fox News that the White House has been working as quickly as it can to release to Congress the whistleblower complaint involving Trump’s conversations with the Ukrainian president, as long as it’s legally possible.

The White House has maintained that they have nothing to hide and that there has been no wrongdoing. Their general position has been that it will make everything possible available to Congress or the public regarding Trump’s call and the complaint to the intelligence community’s inspector general.

“The president must be held accountable,” Pelosi said, citing his alleged “betrayal of his oath of office, betrayal of our national security, and the betrayal of the integrity of our elections.”

Pelosi and Democrats also allege that the administration violated the law by not turning over a whistleblower complaint concerning Trump’s July call.