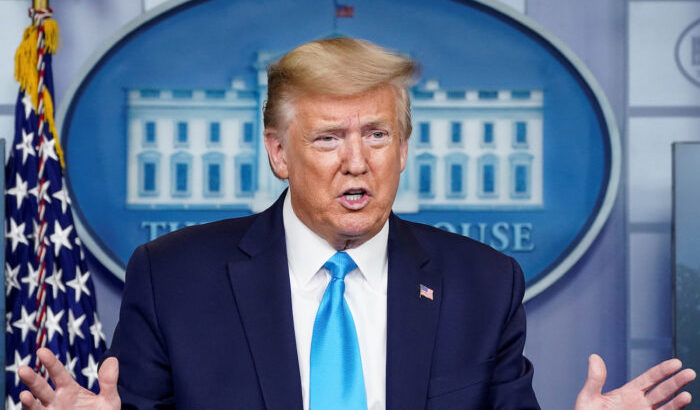 BY JACK PHILLIPS
President Donald Trump said Monday he will make a decision in the near future on reopening the country after conferring with governors and other officials, as the White House forms a second CCP virus task force with the intention of restarting the shuttered economy.

“For the purpose of creating conflict and confusion, some in the Fake News Media are saying that it is the Governors decision to open up the states, not that of the President of the United States & the Federal Government,” Trump wrote Monday on Twitter.

Trump said that the notion that governors are the ones who are responsible “is incorrect.

“It is the decision of the President, and for many good reasons,” he added on Twitter. “With that being said, the Administration and I are working closely with the Governors, and this will continue.”

Trump is able to issue federal regulations to prevent the spread of the CCP (Chinese Communist Party) virus, a type of novel coronavirus that causes the disease COVID-19. However, it is not clear if he has the authority to reverse public health restrictions put into place by state or local authorities.

Across the United States, governors have implemented stay-at-home orders and shuttered nonessential businesses, impacting millions of jobs and forcing Congress to pass stimulus packages to help out-of-work Americans and closed companies. The virus, meanwhile, has infected about 500,000 people and caused more than 20,000 deaths.

The White House has recommended people avoid nonessential travel and places like restaurants, as well as keeping in-person gatherings to 10 people or fewer until the end of April.

The stimulus package included sending checks up to $1,200 for certain individuals, $2,400 for married couples, and $500 for every child. The Internal Revenue Service (IRS) announced over the weekend that the first deposits have been made with more to come in the coming week or so.

Trump’s Monday morning Twitter post comes as an economic task force is slated to form inside the White House, according to news reports.

“We’re not doing anything until we know that this country is going be healthy. We don’t want to go back and start doing it over again,” Trump said last week. “I’ve made a lot of big decisions in my life,” the president added. “This is by far the biggest decision of my life because I have to say OK let’s go.”

Trump’s comments were echoed by the World Health Organization (WHO), which said that the premature lifting of stay-at-home measures and other restrictions would trigger a resurgence in the virus. Meanwhile, top White House official Dr. Anthony Fauci said in weekend interviews that there have been promising signs that the virus is leveling off in the United Staes but cautioned against reducing restrictions.

On Monday morning, Dr. Robert Redfield, the head of the Centers for Disease Control and Prevention, said the country is nearing its peak for hospitalizations, deaths, and cases.

“We have to substantially augment our public health capacity” to ramp up testing, tracing, and identifying cases, Redfield said in an interview with Today.com, adding that the hospital and medical capacity should be bolstered in the meantime. “There is no doubt that we have to reopen correctly” in a “step-by-step process,” Redfield said.