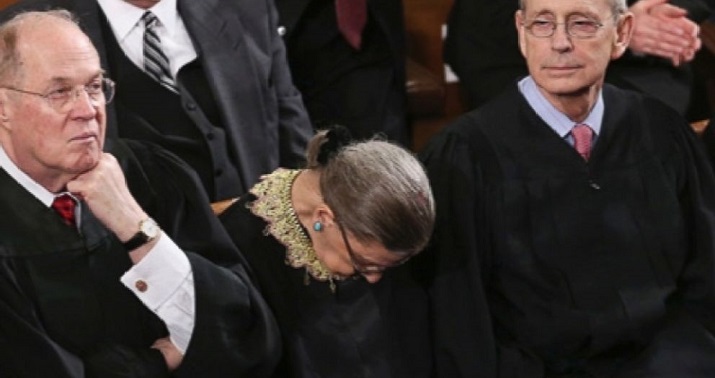 The White House is reaching out to political allies and conservative activist groups to prepare for an ailing Justice Ruth Bader Ginsburg’s possible death or departure from the Supreme Court — an event that would trigger the second bitter confirmation battle of President Donald Trump’s tenure.

The outreach began after Ginsburg, 85, on Monday missed oral arguments at the court for the first time in her 25 years on the bench. The justice, who was nominated to the court by President Bill Clinton in 1993, announced in late December that she underwent a surgical procedure to remove two cancerous growths from her lungs.

The White House “is taking the temperature on possible short-list candidates, reaching out to key stakeholders, and just making sure that people are informed on the process,” said a source familiar with those conversations, who spoke on background given the delicate nature of the subject. “They’re doing it very quietly, of course, because the idea is not to be opportunistic, but just to be prepared so we aren’t caught flat-footed.”

Ginsburg had a pulmonary lobectomy, the Supreme Court said in a statement, and her doctors said that post-surgery there was “no evidence of any remaining disease.” She has also recovered from several past health scares. But her departure from the Court would allow Trump to nominate a third Supreme Court justice — the most in one presidential term since President Ronald Reagan placed three judges on the highest court during his second term.

The nine-member court is currently divided 5-4 between its conservative and liberal wings. Ginsburg’s departure would allow Trump to create the Court’s strongest conservative majority in decades, a scenario sure to bring intense opposition from Democrats and liberal activists still furious over the October confirmation of Justice Brett Kavanaugh.

“But if you are replacing Justice Ginsburg with a Trump appointee, that would be akin to replacing Thurgood Marshall with Clarence Thomas,” Malcolm added. “It would mark a large shift in the direction of the court.”

The White House is urging outside allies to be prepared for another bruising confirmation battle should Ginsberg’s health take a sudden turn for the worse, according to four sources with knowledge of the overtures. Outside groups, led by the Federalist Society and the Judicial Crisis Network, played a leading role in helping to confirm Kavanaugh and, before that, Justice Neil Gorsuch.

The groups have advised the Trump team on everything from potential nominees to political and media strategy, producing television advertisements and blitzing reporters with supportive messaging. Together, the conservative groups spent over $7 million on ads supporting Kavanaugh’s nomination.

The White House has quietly pressed them not to rest on their laurels after Kavanaugh’s nationally-divisive confirmation battle amid charges of sexual misconduct.

Though Ginsburg and the Court itself have been tight-lipped about her health, her absence from the bench this week has become a cause of concern because of her remarkable past attendance streak, which persisted through two previous cancer treatments and a number of other health scares. At the outset of oral arguments on Monday, Chief Justice John Roberts said she was “unable to be present” but would participate in the cases nonetheless, reading briefs, filings, and a transcript of the sessions.

Supreme Court appointments are indefinite, and a seat is considered empty only if a justice dies or retires from the court. In the event a judge is unable to perform his or her duties, the only clear recourse is Congressional impeachment.

Ginsburg told an audience in mid-December that she “will do this job as long as I can do it full steam.” As a candidate in July 2016,
Trump tweeted that her “mind is shot — resign!” But after her surgery last month he wished her a “full and speedy recovery.”

The White House counsel’s office and senior aides on the Senate Judiciary Committee, now chaired by Sen. Lindsey Graham (R., S.C.), have begun drafting a shortlist of potential court nominees. It features judges the president has considered for previous vacancies along with some new names. Many of them are women, sources say.

“Outside of war and peace, of course, the most important decision you make is the selection of a Supreme Court judge, if you get it,” Trump said last summer.

This article was brought to you by Politico – click here to read all.
This article was posted by our C-VINE team of volunteer workers, investigative reporters, and citizen journalists, who make certain all information is vetted for accuracy before publishing. C-VINE News is placed in a Foundation, also called a Charitable Trust and is run by, “We the People”.