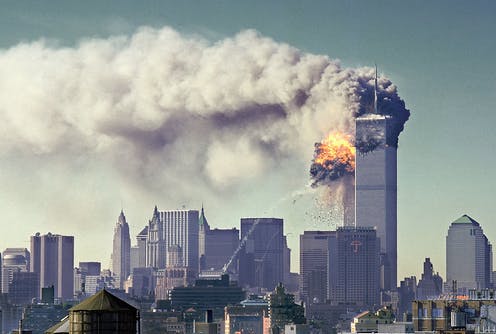 I was in New York a couple years after 9/11, and they were STILL excavating debris away from Ground Zero.

It was a very somber time and the heaviness in the air oppressive. If it was like that then… I can’t imagine the horror of the day.

I will never forget the two Fire Engines roaring by with sirens blazing…all filled with firemen who had a haunted look in their eyes as they gazed out over the plaza.

Then there was the cafe owner across the street on the corner, who told me his eye witness story about how his shop was set up as an emergency triage for patients…but nobody came.

All they heard were hundreds of emergency locator beacons going off at the same time under the rubble from all the first responders. The Firemen, EMT’s AND Police Officer’s who gave their lives…. running TOWARD danger, to help people they didn’t know.

Fast forward 16 years later in 2019, as I was sitting in LIVE and reporting on one of the KSM et al 9/11 Pre-Trial GTMO Tribunals…  I listened to the testimony of one of the “alleged terrorists”. He was on the stand, and sat there “gleefully bragging” about the pain-staking plans they had made for the jihad.

Some of the 9/11 family members were in the proceedings listening to this diatribe, and I can’t imagine the pain the testimony added to this seemingly never ending attack with no Justice as of yet.

Yes, you heard me correctly… Almost 20 years after one of the most horrific attacks on American soil, and we are STILL in the PRE-TRIAL Phase of the 9/11 Tribunals.

It makes my blood boil!

We Will NEVER FORGET!

Recent generations are taught to believe what they are told without question.

C-VINE is a Charitable Foundation. We are all volunteers, working hard to dig deep until the truth is found.