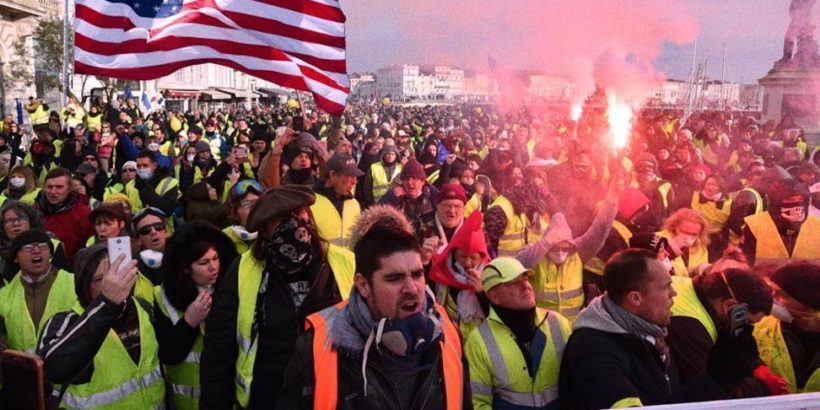 Just why is the Middle Class so Angry?  Good Question!  Please read the greatest unapologetic, bottom-lined explanation below.

Why Are the Western Middle Classes So Angry?

What is going on with the unending Brexit drama, the aftershocks of Donald Trump’s election and the “yellow vests” protests in France? What drives the growing estrangement of southern and eastern Europe from the European Union establishment? What fuels the anti-EU themes of recent European elections and the stunning recent Australian re-election of conservatives?

What are the popular gripes against them?

Two, globalization enriched the cosmopolitan elites who found worldwide markets for their various services. New global markets and commerce meant Western nations outsourced, offshored and ignored their own industries and manufacturing (or anything dependent on muscular labor that could be replaced by cheaper workers abroad).

Three, unelected bureaucrats multiplied and vastly increased their power over private citizens. The targeted middle classes lacked the resources to fight back against the royal armies of tenured regulators, planners, auditors, inspectors and adjustors who could not be fired and were never accountable.

Four, the new global media reached billions and indoctrinated rather than reported.

Five, academia became politicized as a shrill agent of cultural transformation rather than focusing on education — while charging more for less learning.

One common gripe framed all these diverse issues: The wealthy had the means and influence not to be bothered by higher taxes and fees or to avoid them altogether. Not so much the middle classes, who lacked the clout of the virtue-signaling rich and the romance of the distant poor.

In other words, elites never suffered the firsthand consequences of their own ideological fiats.

Green policies were aimed at raising fees on, and restricting the use of, carbon-based fuels. But proposed green belt-tightening among hoi polloi was not matched by a cutback in second and third homes, overseas vacations, luxury cars, private jets and high-tech appurtenances.

In education, government directives and academic hectoring about admissions quotas and ideological indoctrination likewise targeted the middle classes but not the elite. The micro-managers of Western public schools and universities often preferred private academies and rigorous traditional training for own children. Elites relied on old-boy networks to get their own kids into colleges. Diversity administrators multiplied at universities while indebted students borrowed more money to pay for them.

In matters of immigration, the story was much the same. Western elites encouraged the migration of indigent, unskilled and often poorly educated foreign nationals who would ensure that government social programs — and the power of the elites themselves — grew. The champions of open borders made sure that such influxes did not materially affect their own neighborhoods, schools and privileged way of life.

Elites masked their hypocrisy by virtue-signaling their disdain for the supposedly xenophobic, racist or nativist middle classes. Yet the non-elite have experienced firsthand the impact on social programs, schools and safety from sudden, massive and often illegal immigration from Latin America, the Middle East, Africa and Asia into their communities.

As for trade, few still believe in “free” trade when it remains so unfair. Why didn’t elites extend to China their same tough-love lectures about global warming, or about breaking the rules of trade, copyrights and patents?

The middle classes became nauseated by the constant elite trashing of their culture, history and traditions, including the tearing down of statues, the Trotskyizing of past heroes, the renaming of public buildings and streets, and, for some, the tired and empty whining about “white privilege.”

If Western nations were really so bad, and so flawed at their founding, why were millions of non-Westerners risking their lives to reach Western soil?

How was it that elites themselves had made so much money, had gained so much influence, and had enjoyed such material bounty and leisure from such a supposedly toxic system — benefits that they were unwilling to give up despite their tired moralizing about selfishness and privilege?

In the next few years, expect more grassroots demands for the restoration of the value of citizenship. There will be fewer middle-class apologies for patriotism and nationalism. The non-elite will become angrier about illegal immigration, demanding a return to the idea of measured, meritocratic, diverse and legal immigration.

Because elites have no answers to popular furor, the anger directed at them will only increase until they give up — or finally succeed in their grand agenda of a non-democratic, all-powerful Orwellian state.

Victor Davis Hanson is a classicist and historian at the Hoover Institution, Stanford University, and the author of the soon-to-be released “The Second World Wars: How the First Global Conflict Was Fought and Won,” to appear in October from Basic Books. You can reach him by e-mailing authorvdh@gmail.com.