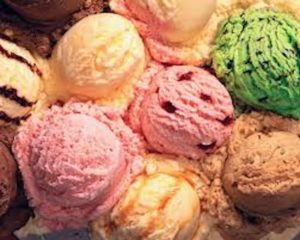 The take-down of Donald Trump, pre and post presidency, has failed. Everything the Deep State has tried over the past 3-1/2 years is ending. Trump’s administration has removed the power structures. They’ve taken control, the foundation is set, and they only have one shot to ‘Make America Great Again.’

What do Nancy Pelosi, Joe Biden, Jeni Britton Bauer and Les Wexner have in common? Jeffrey Epstein … and Ice Cream.  It appears Joe’s campaign has been funneling money. Nancy has been advertising, owner and name-sake, Jeni is on the Board of Trustees for the Wexner Center Foundation. Les Wexner’s name is in Jeffrey Epstein black book.

These ‘expenses’ have been deposited into Biden’s account in $70.00 – $80.00 increments likely to avoid notice. $10,000 on ice cream seems a little suspicious. As they say, follow the money.

Unfortunately for the MSM, a video surfaced of Larry King taking a call from a woman who’s daughter encountered a problem at work. She worked for a prominent Senator but could not get help. It appears the woman may have been Tara Reade’s mother. Support for the story is bolstered through many interviews. Will Joe Biden be able to hold his bid until his reinforcement appears and takes his place?

Justifiable evidence shows General Flynn’s innocence. Court documents released Friday, referred to as ‘The Brady Material,’ provided the defense with remarkable new and withheld evidence. Will a pardon replace Flynn’s guilty verdict or will he be exonerated showing he never commited the crime?

The DS wants Trump to look like a dictator. He did what he does best… flipped the narrative and put the spot-light on the governors.  Certain governors are being exposed and people are noticing. The MSM and governments all around the world are on display. People are rising up, fighting for their rights to be free and the elitist are completely caught off guard.

Our freedom was given to us by God, Almighty, not by the elites, not by the government. We are not their slaves, they are not our masters.We will no longer be divided, but will become united. More must be revealed but we are on our way.

Everything is coming together. People are waking up. Indictments are coming. Patriots are in control and we have only one shot to ‘Make America Great Again.’