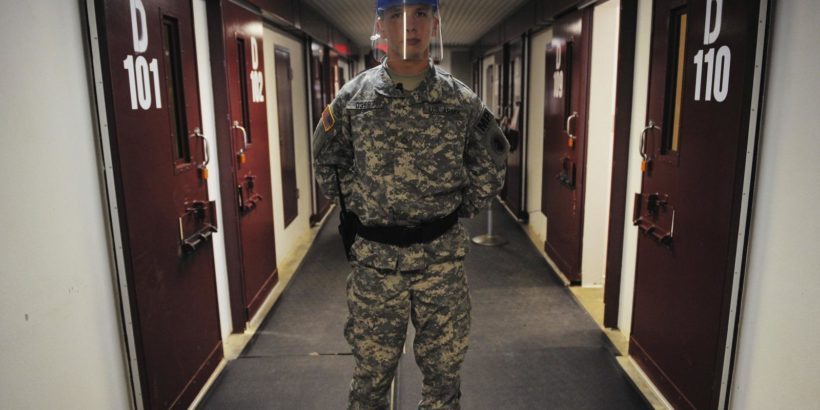 The U.S. government has been accused of using “torture-lite” or “moderate physical pressure” against detainees, persons held in custody for political reasons, typically because they pose a distinct threat to the U.S. or possess information crucial to American security. In practical terms, what does this mean?

This form of torture is sometimes referred to as “Palestinian hanging” due to its use by the Israeli government against Palestinians. It involves binding the prisoner’s hands behind his back. After fatigue sets in, the prisoner will inevitably fall forward, putting full body weight on his shoulders and impairing breathing. If the prisoner is not released, death by crucifixion may eventually result. Such was the fate of U.S. prisoner Manadel al-Jamadi in 2003.

The number one criterion for “torture-lite” is that it must leave no physical marks. Whether U.S. officials are threatening to execute a prisoner’s family or falsely claiming that the leader of his terror cell is dead, a steady diet of misinformation and threats can be effective.

It’s remarkably easy for prisoners to lose track of time when they’re locked up in cells. Sensory deprivation involves removing all noise and light sources as well. Guantanamo prisoners were additionally bound, blindfolded and wore earmuffs. Whether prisoners subjected to long-term sensory deprivation can still tell fiction from reality is a matter of some debate.

Maslow’s hierarchy of needs identifies basic physical needs as the most fundamental, more so than religion, political ideology or community. A prisoner may be given just enough food and water to survive. It may take as long as a week before he appears physically thinner, but his life will come to revolve around a quest for food and he may be more inclined to divulge information in exchange for food and water.

Studies have shown that missing a night’s sleep temporarily drains 10 points from a person’s IQ. Consistent sleep deprivation through harassment, exposure to bright lights and exposure to loud, jarring music and recordings can drastically impair judgment and wear down resolve.

Water torture is one of the oldest and most common forms of torture. It arrived in the U.S. with the first colonists and has cropped up many times since then. Waterboarding is its latest incarnation. It involves a prisoner being strapped down to a board then dunked in water. He’s brought back to the surface and the process is then repeated until his interrogator secures the information being sought.

Most common in the 1920s, forced standing involves prisoners standing in place, often overnight. In some cases, the prisoner may face a wall, standing with his arms extended and his fingertips touching it.

Sometimes referred to as a “hot box” or simply as “the box,” the prisoner is locked up in a small, hot room which, due to lack of ventilation, essentially functions as an oven. The prisoner is released when he cooperates. Long used as a form of torture in the U.S., it is particularly effective in the arid Middle East.