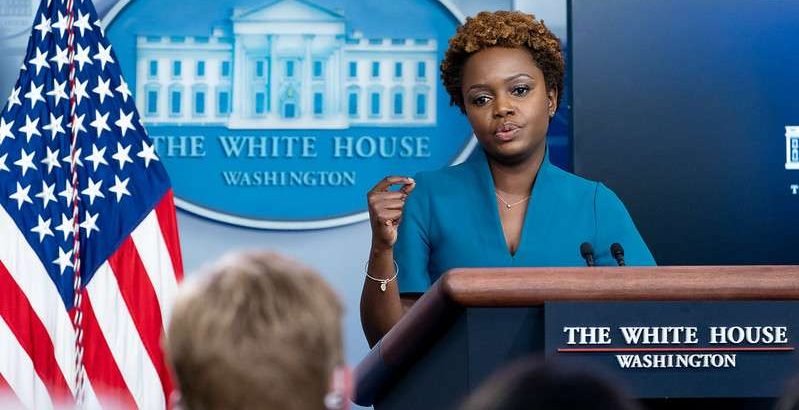 Sixty-eight White House journalists signed a letter to press secretary Karine Jean-Pierre asking to end the prescreening of reporters who are allowed into President Joe Biden’s events, calling the rules “antithetical to the concept of a free press.”

“The current method of allowing a limited number of reporters into these events is not only restrictive and antithetical to the concept of a free press, but it has been done without any transparent process into how reporters are selected to cover these events,” the letter, dated June 30, reads.

“The continued inability of the White House to be candid and transparent about the selection process for reporters attending his remarks undermines President Biden’s credibility when he says he is a defender of the First Amendment,” the letter continues to say.

“The incongruity,” it adds, “of these restrictions underscores the belief by many reporters that the administration seeks to limit access to the president by anyone outside of the pool, or anyone who might ask a question the administration doesn’t want to answer.”

When she was asked about the selection process for events featuring Biden, Jean-Pierre told reporters last month that “I actually don’t know” although she denied the White House was “blacklisting” anyone.

In June, Jean-Pierre was asked by a New York Post reporter if the White House vetting process has “morphed into a bit of a blacklist” for certain reporters.

“Can I look into this?” Jean-Pierre eventually said. “Because I actually don’t know what you’re—the process that you’re speaking of. I think blacklisting is a very strong word to use. We have been, you know … we try to make sure to do our best to make sure that the press gets to hear from the president directly. It is important for us. It is important for you all, it’s important for the American people. And so that has been a priority. So let me look into this process that you’re speaking of.”

Months before that, former press secretary and current MSNBC employee Jen Psaki was asked a similar question to which she replied: “I don’t have any more information on that.”

The Epoch Times has contacted the White House for comment on the letter.