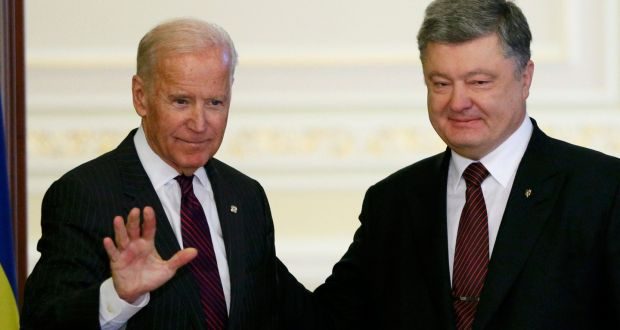 A Ukrainian source has revealed that former Vice President Joe Biden was furious about an article in Politico  that revealed election interference and collusion between the government of Ukraine and the Democratic National Committee.

Biden let out his anger with Ukrainian President Petro Poroshenko on his January 15th, 2017 trip to Kiev, Ukraine, reportedly telling the foreign leader, “You fucked up! What we were working on all leaked to the press!”

This new disclosure indicates that Biden had a much more significant role in the 2016 election interference by Democrats close to Hillary Clinton than has been previously revealed.

After Biden’s outburst, Poroshenko then called in a former Ukrainian official who he believed to be a whistleblower and threatened him. The Ukrainian whistleblower was later forced to flee Ukraine, fearing for his safety.

A Kyiv Post article from January 2017 confirmed that Biden was in Ukraine shortly after the Politico article’s release and met with Poroshenko.

The Politico article Ukrainian efforts to sabotage Trump backfire detailed how a longtime DNC operative named Alexandra Chalupa worked directly with the Ukrainian embassy to attempt to get dirt on then-candidate Trump in an attempt to tie him to Russia.

One of the most chilling parts of that article revealed that Chalupa had told Ukrainian officials that the Democrats planned hearings prior to the election attempting to tie Trump to Russia, months before the alleged “DNC hack” was revealed, and months before Glenn Simpson claimed he hired Christoper Steele to write the now-disgraced “Steele Dossier.”

Chalupa admitted that she was working with Ohio liberal Democrat Marcy Kaptur:

Chalupa confirmed that, a week after Manafort’s hiring was announced, she discussed the possibility of a congressional investigation with a foreign policy legislative assistant in the office of Rep. Marcy Kaptur (D-Ohio), who co-chairs the Congressional Ukrainian Caucus. But, Chalupa said, “It didn’t go anywhere.”

Asked about the effort, the Kaptur legislative assistant called it a “touchy subject” in an internal email to colleagues that was accidentally forwarded to Politico.

Kaptur’s office later emailed an official statement explaining that the lawmaker is backing a bill to create an independent commission to investigate “possible outside interference in our elections.” The office added “at this time, the evidence related to this matter points to Russia, but Congresswoman Kaptur is concerned with any evidence of foreign entities interfering in our elections.”

The article that angered Biden also revealed that Chalupa was working closely with Trump-hating reporter Michael Isikoff and coordinating with the Communications Director Luis Miranda, who was hand-picked for the position by Hillary Clinton’s team.

Those details came out in an email published by Wikileaks.

In the email, which was sent in early May to then-DNC communications director Luis Miranda, Chalupa noted that she had extended an invitation to the Library of Congress forum to veteran Washington investigative reporter Michael Isikoff. Two days before the event, he had published a story for Yahoo News revealing the unraveling of a $26 million deal between Manafort and a Russian oligarch related to a telecommunications venture in Ukraine. And Chalupa wrote in the email she’d been “working with for the past few weeks” with Isikoff “and connected him to the Ukrainians” at the event.

The Ukrainian whistleblower has expressed an interest in talking to President Trump directly about the matter, as well as other issues related to Joe Biden’s influence in Ukraine.

This is a developing investigation

by Assistant Editor The Gateway Pundit