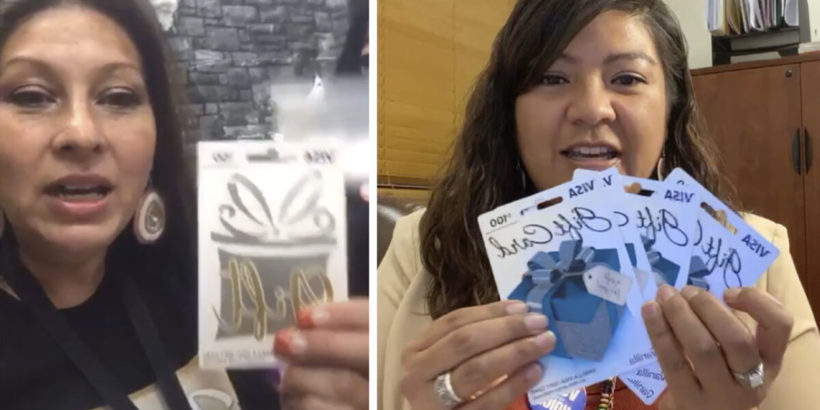 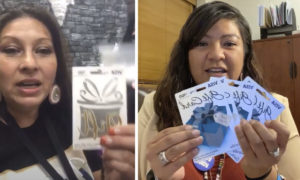 Getting yourself some ‘swag’ could land you some prison time!

The Nevada Native Vote Project along with other organizations, encouraged voter turnout by raffling gift cards and other gifts in exchange for ballots. This is a federal crime.

Biden supporters appear to be behind this these cash prizes which are connected to Act Blue, a huge left-wing supporter for the Democratic Party.

The Nevada Native Vote Project posted photos on Facebook on Election Day of smiling voters holding $25 gift cards after handing over their ballots.

The posts have since been deleted but not before they were archived. The removal may have had something to do with the U.S. criminal code, two distinct sections of which impose fines and prison sentences for “whoever makes or offers to make an expenditure to any person, either to vote or withhold his vote.”

Offering gift cards for ballots was not the only way the Nevada Native Vote Project enticed people to vote. In a video that still appeared on Facebook on Nov. 24, Bethany Sam, the public relations officer for the Reno-Sparks Indian Colony, urged people to come out and vote by offering “some extra swag that we can give out.”

“We have twenty-five $25 dollar gift cards to raffle off so that’s a lot of money in cash here. We have also four $100 gift cards to give away, so again you want to make sure to get out here and vote. And then, we have four $250 gift cards to raffle. And our grand prize is going to be a $500 Visa gift card to the person or native voters who came out early this week early voting,” Sam said, adding that voters need only send a photo of themselves at the polling place to enter.

Sam stood beside two elderly people who were holding free T-shirts they received for coming out to vote. She added that more shirts were still available, in addition to keychains, bracelets, necklaces, earrings, and stickers.

Nevada was not the only state offering a chance to win cash and expensive prizes on or before Election Day. The Epoch Times has reviewed photos and videos documenting the same scheme in eight other states, including the perennial battlegrounds of Arizona, Wisconsin, and Minnesota.

“Vote buying is a federal crime. Whether FBI agents and the DOJ Election Crimes office is willing to involve itself is a separate matter altogether,” Logan Churchwell, communications director with the Public Interest Legal Foundation, told The Epoch Times in an email.

Another scrubbed video shows Sam promoting a swag giveaway in front of a Biden-Harris bus sometime before the end of Nevada’s early voting period on Oct. 30.

“If you can, get down here and get yourself some swag, see the Biden-Harris campaign bus and then you can go in person or drop your ballot off at our Reno polling location here,” Sam said.

“We have a lot of our community members here waiting to get their swag,” she added, speaking through a Biden-Harris mask. “Get down here and get your swag and vote.”

Sam noted that the Reno-Sparks Indian Colony endorsed the Biden-Harris ticket. She then turned the camera to Arlan Melendez, chairman of the Reno-Sparks Indian Colony that describes itself as a “sovereign Indian nation” with a Tribal Council that “carries the same unique powers and duties as any city council, county commission, or legislative government across the United States.”

“I think the Biden-Harris campaign is supporting tribal sovereignty,” Melendez said before urging people to come out to vote.

There are an estimated 60,000 registered Native Indian voters in Nevada. In a video filmed on Election Day, Sam encouraged natives to vote because Nevada is a swing state.

“I also want you to know that we do have a raffle going on whether you’re early voting or you vote today during the Election Day,” Sam said, instructing people to enter the draw by sending her a screenshot of their cast ballot from a ballot-tracking website or a photo of themselves with an “I Voted” sticker.

The prizes included cash gift cards valued at $250, $100, and $25 as well as T-shirts and beaded items, Sam said. At the end of the video, Sam told viewers to visit the tribe’s voting recommendations page, which advises people to vote for former Vice President Joe Biden.

The voting recommendations page features a photo of a poster for the Native Vote non-profit—a national get-out-the-vote initiative. Native Vote describes itself as non-partisan, as is required by the IRS for organizations seeking tax-exempt status.

Sam listed Native Vote as the first of several organizations that supported the cash raffles and swag giveaway. The other organizations she named were the Native Organizers Alliance, the Native American Rights Fund, Four Directions, and Washoe County.

The donation pages for Four Directions and the Native Organizers Alliance are hosted by Act Blue, a fundraising behemoth for Democrats and left-wing causes.

The organizations did not return emailed requests for comment.

In a video filmed later on Election Day in Hungry Valley, Sam was seen standing roughly 50 feet from the entrance to the local polling place while holding a stack of gift cards and promoting the raffle.

In another video, Sam said the colony received the T-shirts from the Nevada Native Vote project. “Everyone who submits in for the raffle can get one of these T-shirts,” she said.

In a video announcing the winners of the raffle, Sam said the prizes came from the Native Vote project.

“This is exciting guys. We’ll give out over $2,000 in gift cards, so this is pretty cool,” Sam said, while pulling paper slips with names of the winners from a pot and clipping names to the gift cards.

“Congratulations to all the winners,” Sam said after drawing the name for the winner of the $500 gift card. “Thank you for using your voice, which was your vote. Obviously, it had a tremendous impact on the way Nevada ended up as far as the electoral votes and helped get Biden into office. We couldn’t have done it without you.”

Sam was not the only person to run the money-for-votes raffles for Native Vote. In a video posted on Facebook, LaCarrie McCloud displayed swag to get people to come out and vote.

“We’re just here to give you some goodies and some incentives for you to vote today,” McCloud said, showing a T-shirt, a bag of coffee, masks, hot dogs, chips, soda “for those who vote and want to come down and grab a dog.”

In another deleted video, McCloud drew the names of five winners of a $50 raffle “that the Nevada Native Vote Project did today for all those voters who walked in and voted today.” Her daughter, who drew the slips from a plastic tub, won one of the gift cards.

The Nevada Native Vote Project promoted Sam’s raffle on its Facebook page. The post states that the raffle was sponsored by the Reno-Sparks Indian Colony and Nevada Native Vote Project. The message instructs people to email a photo of themselves with the “I Voted” sticker or a screenshot of their ballot completion from the Nevada Ballottrax website.

Teresa Melendez, who is listed as the native vote coordinator for the Nevada Native Vote Project, did not respond to emailed questions.

Posts on the Nevada Native Vote Project Facebook page show that similar raffles were conducted in 15 Nevada native communities, with 116 voters receiving $6,650 in cash prizes. The raffle rules state that contestants “must show proof of voting to qualify.” The project’s social media posts consistently promoted free food, coffee, cookies, T-shirts, and other benefits to early voters. The total amount includes $25 gas cards, which were offered to voters without the need to enter into a raffle on a first-come-first-serve basis.

In the Walker River community, the raffle prizes included an HP laptop and a Bose speaker, as seen in a Facebook post by Elveda Martinez. Martinez promoted a number of money-for-votes and expensive item raffles. A photo she posted on Election Day shows a voter holding an unopened Apple iPad.

“Thanks for voting. If we all vote, we can make a difference and be heard. Here’s some of our tribal voters with their incentives thanks to NCAI,” Martinez wrote.

A review of social media posts shows similar cash-raffle-for-vote activity in at least seven other states.

A group called Menikanaehkem promoted a Smart TV raffle for voters who sent in a photo of their “I Voted” sticker or their voting number. The group announced four winners on Election Day and was still promoting more prizes. The group did not respond to an emailed request for comment.

The Forest County Potawatomi Community promoted a $50 gas card raffle that people could enter by sending in a photo of their “I Voted” sticker. The Facebook post includes the same Native Vote T-shirt offered in the Nevada raffle. The group did not respond to a request for comment sent to its Facebook page.

“Election bribery is illegal in Wisconsin,” Reid Magney, the public information officer with the Wisconsin Elections Commission, wrote in an email to The Epoch Times. “Anyone with evidence of an election crime should make a complaint to law enforcement so it can be investigated and prosecuted.”

“State law requires the Wisconsin Elections Commission to receive a verified complaint in order to order an investigation or make a referral to law enforcement. I’m not aware of any verified complaints,” Magney added.

The Lac Vieux Desert Band of Lake Superior Chippewa Indians offered $20 gas cards to anyone who sent pictures of themselves voting. The group did not respond to a request sent to its Facebook page.

“At this time, no evidence of widespread illegal voting activity has been reported in Michigan. The Michigan Department of State has zero tolerance for illegal activity and urges anyone with evidence to report it to law enforcement or the Michigan Bureau of Elections,” Jake Rollow, the director of communications for Secretary of State Jocelyn Benson, said in an email to The Epoch Times.

Corazon Arizona promoted a cash raffle for people who sent in a picture of themselves with their ballot.

“People! This is all you have to do to enter the raffle! Post a ballot selfie … to win money! Don’t forget to use your voice and vote before November 3, 7pm!” Stephanie Salgado wrote on Facebook, instructing her audience to tag Corazon Arizona.

The office of the Arizona secretary of state did not return an emailed request for comment.

Corazon Arizona, which promoted the raffle on its Facebook page on Oct. 29, did not respond to a request for comment.

A video from Washington shows a “Native vote team” in front of a Biden sign promoting a voter raffle for a $200 gift card and other prizes. A Facebook post from the same group said the raffle included two dozen $25 gas cards. At the prize drawing for the raffle, one of the participants said “you won $25 worth of gas how cool, just for voting.”

Lummi Native Vote 2020, the group which promoted the raffle, posted a photo of Joe Biden and Kamala Harris on its webpage on Nov. 7. “We did it,” the post read. The group did not respond to a request sent to its Facebook page.

The office of the Washington secretary of state did not respond to an emailed request for comment.

The American Indians in Texas group on Facebook raffled off gift cards worth up to $250 and a 58-inch television.