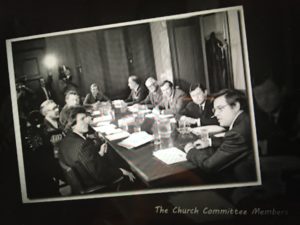 In examining the CIA’s past and present use of the U.S. Media, the Church Committee finds two reasons of concern.  The first is the potential inherent in covert media operations, for knowingly manipulating or incidentally misleading the American Public and Government Officials.
.
The Church Committee took public and private testimony from hundreds of people, including large amounts of files from the FBI, CIA, NSA, IRS.  Within theses files there is a section that focuses on the intelligence community’s involvement with the U.S Media.
.
The CIA and FBI knowingly had operations to insert misinformation agents and misinformation into the US media to control what the public citizens would believe as unbiased information and render it as fact.

By the late 1970’s there were more than 400 CIA and FBI personnel posing as reporters in the Main Stream Media companies.  The news was now controlled by the intelligence community.

The CIA and FBI later stated that “Operation Mockingbird” and other operations like it had been all terminated.

This statement was a huge lie.

The modern mainstream media is the same thing as the Church’s power in the 1300’s, in which they control the information, and they don’t like it when people disagree with them.  In fact, if someone who disagrees with them gets popular enough, they often times resort to smear campaigns and attack their personal life.

Why would government agencies want to give non-truthful information to the American people…?

“I cannot think of one reason the media and the government would lie to the citizens of this nation . . . controlling information wouldn’t do anything . . .” (No?)

National Defense Authorization Act (NDAA) includes an amendment that makes it legal for the use of propaganda on the American public.

It effectively nullifies the Smith-Mundt Act of 1948, which explicitly forbids information and psychological operations aimed at influencing US public opinion.

According to so-called “fact-checking” websites, state that the National Defense Authorization Act is an anti-propaganda bill, which it is clearly not. This too, is a lie.

Main Stream Media is a scripted narrative.  IT IS “FAKE NEWS”.

IntheMatrixxx
The Main Stream media has proven time and time again that they produce more propaganda than un-bias news.
Owned and Operated by no more than six major companies, almost every news organization in the United States and possibly the world is telling a scripted narrative, not real unbiased news…
“Once you experience THE GREAT AWAKENING, the truth comes in the first place. All the buried passions come out for development. The matrix’s fears have no longer control on what you want to do for a living.” – InTheMatrixx