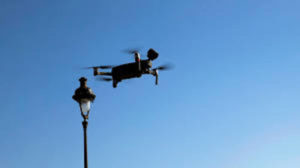 Fear, panic and chaos is the theme of the The Deep State and Mainstream Media (MSM).  They want the country to remain closed until November, ironically at the peak of flu season. If the economy crashes they can still use the argument for everyone to stay home. Trump has something they don’t have. HCQ.

Hydroxychloroquine along with other remedies has been proven to aid in this pandemic. The MSM reports that HCQ is dangerous. However,  the report is false. Taken in proper doses for the right health concerns, it is deemed very safe. HDC has been around since the mid 1950’s and many doctors from around the globe have seen great rebounds from declined health.

It is reported China has been sending drones to police forces in 22 U.S. states. In 2017, the selective US data being collected and exploited on these drones has targeted government and privately owned entities. In 2019, the Interior Dept., grounded their entire fleet of these drones, however, in some states, they are still used. This must stop!

The Deep State in Iran is trying to create a narrative.  They keep coming along side of our Navy ships that are out at sea. President Trump told the Navy in a recent tweet to destroy any Iranian gunboats if they keep harassing them. He is giving the Deep State notice that they better not mess with US.

Trump is beginning to open up the country. AG Barr says he will take action if local authorities overstep their boundaries. Many Americans believe their governor is being too cautious, too slow.  We have the right to go back to work and practice our freedoms. Will AG Barr need to step in?

Richard Grenell is the acting DNI. He declassified the IG footnotes revealing that Schiff, Coats and others were knowingly spying on Trump’s campaign. Coats was actually hiding this information when he was acting DNI and Grenell uncovered it. It’s not going well for Coats and soon the whole world will know the truth. Everything is being exposed.

For more on faulty Covid-19 tests and studies, and the key Director of the US Agency to Vaccine Development stepping down, and more, please watch the X22 Report video.