It Is Up To The Governors And Mayors To Stop The Madness. Why Aren’t They? 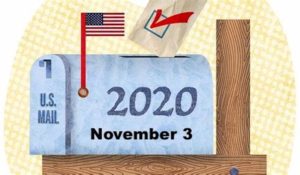 “Control your neighborhoods, control your states. If you can’t do it, I might have to step in.” Who did President Trump say this to? Why are Democratic States controlled by riotous behavior and why is he letting them destroy their cities? Many people are wondering why Trump is not stepping in to stop this madness.

Will Trump declare Martial Law? Will he bring in the  Military? The pressure is on the governors to do the right thing but if they won’t, the whole country will see they have a mob-mentality and their corruption will be exposed.  These governors and mayors don’t care about George Floyd. It’s something much, much larger, much more personal.

The DS has been trying to regain power by removing Trump from office. Russian Collusion, Obstruction, Impeachment, Pandemic, Race-Riots, yet they cannot remove him. Other events will most likely take place by the DS. We must remain vigilant.  They won’t stop.  All of this destruction is pointing to November 3, 2020. They must achieve the vote-by-mail method in order to cheat so they can win. What are they after? Who are they after?

One week earlier, the Supreme Court ruled 9-0, rogue judges could not do what Judge Sullivan is doing to General Flynn. The DOJ reminded Judge Sullivan they were the prosecutors, not him but he was taking orders from Obama. “Where is the 302,” asked Trump? Sometimes you can’t tell the people, you need to ‘show’ them. Evidence will be declassified, soon.

Six lawyers representing Hillary Clinton went before judge today to shut down Judicial Watch’s request for more evidence against her e-mail scandal.  This hearing was live streamed on the internet. When were we told to stay off the internet in honor of Black Lives Matter? When were HRC’s lawyers in court? Do you see a connection? The Deep State is deep and wide!

In Nancy Pelosi speech, there is no call to peaceful protesting, no call to stop looting and damaging property, no call to peace. Did she accuse the President of ordering the tear-gassing of people? In no way did he do so. Is the media spreading lying to us, yet again?

The Silent Majority is silent no more. The unnecessary lockdown, the loss of businesses, the riots and destruction of property all point back, not to Donald Trump, but to the corrupt governors and mayors. The Silent majority is awake and will show our intent to take back our country at the polls. The DS has already lost. Remember, the Deep State is after us, Trump is just in the way.