Smartmatic has been used for corrupt voting results for years all over the world – and what has happened there, is happening here.

It’s driven by the Communists.

Sidney Powell appears with Lou Dobbs to discuss an affidavit delivered to her showing how SmartMatic software – designed to manipulate election outcomes. 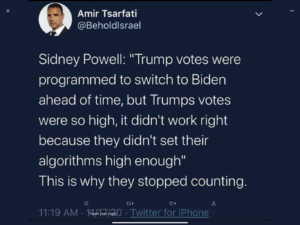 Sidney Powell:  “Trump votes were programmed to switch to Biden ahead of time, but Trump’s votes were so high, it didn’t work right because they didn’t set their algorithms high enough”

Is this why they stopped counting??

Sidney Powell: “Those Social Media operations who have capped off conversations of honest citizens about the election will have to deal with the Executive Order of Dec. 14, 2018 – colluding with foreign entities to cook the vote…This Voter Fraud has been organized and conducted with the help of Silicon Valley people, the Big Tech companies, the Social Media companies and even the Media companies. And I’m going to release the Kraken! It is indeed a very foul mess, it is farther and wider and deeper than we ever thought but we are going to go after it and I’M GOING TO EXPOSE EVERYONE OF THEM!!!”

Sunday, Nov. 15:  Trump Lawyers Rudi Giuliani and Sidney Powell appeared on Fox News and  released the latest on voter fraud in our 2020 Election –  including their evidence of a “Pelosi-owned, CIA-made Dominion program” that was used in at least 27 states, specifically designed to destroy Trump votes and throw others to Joe Biden.

At the same time, the Fake Stream Media were illegally and possibly treasonously, claiming Biden as the “President-Elect”.  The Media does not have the right to freely determine and announce any “winner”.