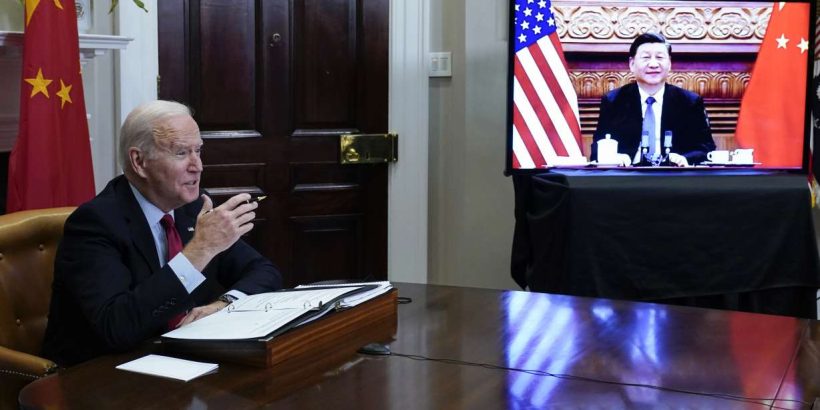 “President Biden detailed our efforts to prevent and then respond to the invasion [of Ukraine], including by imposing costs on Russia,” said a White House readout of the call.

“He described the implications and consequences if China provides material support to Russia as it conducts brutal attacks against Ukrainian cities and civilians,” the statement continued.

“The President underscored his support for a diplomatic resolution to the crisis. The two leaders also agreed on the importance of maintaining open lines of communication, to manage the competition between our two countries.”

Biden also expressed that U.S. policy on Taiwan has not changed and opposed unilateral changes to the status quo. Biden and Xi ultimately tasked their administrations to follow up on on the call during the coming days and weeks.

Xi refused to refer to the war in Ukraine as a “war” during the call, and referred to it instead as a “crisis,” according to Chinese news agency Xinhua, which released several talking points immediately after the end of the call.

The Chinese leader also said that the United States and China would need to work together to “shoulder our share of international responsibilities and work for world peace and tranquility,” while noting that the world was neither tranquil nor stable, Xinhua reported.

White House press secretary Jen Psaki said during a Friday press briefing that Biden did not receive any specific assurances from Xi that China would act one way or another.

She also said that the United States and its allies had not agreed on any specifics regarding what “consequences” would be issued by the United States, or whether there would be any difference in response based on whether China gave economic or military support to Russia.

“We’re not in a place at this point to outline the specifics,” Psaki said. “We’re still discussing [with G7 allies],” Psaki said. “We have a range of tools that could be considered and sanctions are certainly one tool in the toolbox.”

When asked why the administration was not giving Americans any details about the Biden-Xi discussion, Psaki said that was the “most constructive” way to have a dialogue.

The virtual meeting was the first between Biden and Xi since November, when the two leaders held a three-hour long video conference. That meeting ended with an agreement that the two leaders would pursue future talks oriented toward maintaining strategic stability.

Conversely, Friday’s meeting was largely characterized as an opportunity for Biden to assess where Xi stands on the issue of the Ukraine war, and relations with Russia generally.

“This is a conversation about where President Xi stands,” said White House press secretary Jen Psaki ahead of the meeting.

Psaki said that the meeting was a result of the heated seven-hour talks carried out in Rome earlier this week between national security advisor Jake Sullivan and the Chinese regime’s top diplomat, Yang Jiechi.

Xi and Russian President Vladamir Putin declared a “no limits” partnership in early February, less than three weeks before Moscow’s invasion. Since then, U.S. intelligence leaders have warned that cooperation between China and Russia would continue to grow in the coming decade, as the two nations seek to undermine the United States’ preeminence throughout the world.

One former U.S. official has said that the United States and China were locked in a new Cold War. Adm. John Aquilino, commander of the United States’ force in the Indo-Pacific, meanwhile, recently said that China sought to undermine the liberal international order itself.

“The People’s Republic of China is the most consequential strategic competitor that the United States has faced,” Admiral John Aquilino, commander of U.S. Indo-Pacific Command, said on March 9, referring to the regime’s official name.

“They are executing a dedicated campaign that utilizes all forms of national power in an attempt to uproot the rules-based international order to the benefit of themselves and at the expense of all others.”

U.S. officials suggested that the Friday meeting between Biden and Xi would be an opportunity to put pressure on the CCP to influence Putin and prevent further death and destruction in Ukraine, where Russia is accused of carrying out numerous war crimes and crimes against humanity.

“We believe China in particular has a responsibility to use its influence with President Putin and to defend the international rules and principles that it professes to support,” said Secretary of State Antony Blinken during a Thursday press conference.

“Instead, it appears that China is moving in the opposite direction by refusing to condemn this aggression while seeking to portray itself as a neutral arbiter, and we’re concerned that they are considering directly assisting Russia with military equipment to use in Ukraine.”

To that end, Blinken said that China would be made to bear the consequences for any support of Russia’s war, though he did not elaborate on what specific measures would be taken if Xi did not comply with American demands.

“China will bear responsibility for any actions it takes to support Russia’s aggression,” Blinken said, “and we will not hesitate to impose costs.”

There have been no explicit answers from the administration as to what those proposed costs would be.

When asked during a press call on Friday as to whether there were any specific “red lines” that Beijing could not cross or specific sanctions that might be leveraged against China, State Department Deputy Spokesperson Jalina Porter said that there were no specifics to give.

“We’ve encouraged our allies and partners to band together to condemn this senseless war,” Porter said.